LOS ANGELES -- The absurdity of Cody Bellinger's ascendant season reached what felt like an apex on the night of May 27, when the Los Angeles Dodgers' budding superstar came to bat for the fifth time. Moments earlier, in the top of the eighth inning, Bellinger thwarted a New York Mets rally by making a catch in deep right field and uncorking a 300-foot throw that resulted in his seventh outfield assist. Seven innings before that, he recorded his sixth outfield assist, cutting down a runner at the plate. Two innings after that, he blasted his 19th home run in his 52nd game of the season.

And so as he strolled toward home plate with one out and none on in the bottom of the eighth, a Dodger Stadium crowd of 47,816 filled the air with a rightful chant.

It's rare for a player's emergence to be this obvious, this momentous, but Bellinger clearly has lifted himself to a higher stratosphere in his age-23 season. Through it, teammates and coaches have noted how his calm, low-key demeanor has gone unchanged. He admittedly smiles at the Instagram posts that fuel the hype, reads some of the Twitter fodder that attempts to contextualize his torrid start, and then, in his words, "whatever."

The next home run king? 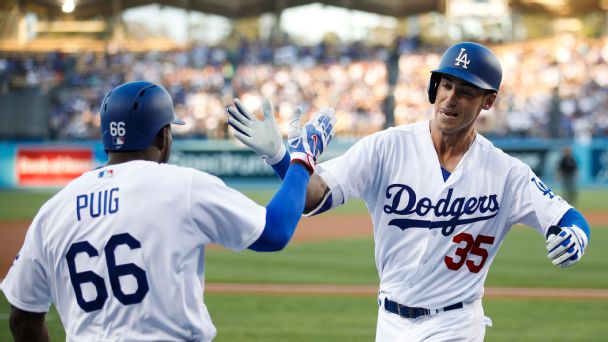 Flashback: What if Cody Bellinger is going to hit 763 home runs and we just don't know it yet? Sam Miller »

But in this instance, the moment grabbed him. He had to step away from the batter's box, just as he was beginning to settle in. He had to gather himself. The "MVP" chants, he acknowledged, got in his head. They made him break character.

"I mean, it's the first time I've heard it," Bellinger said a few days later. "I have no idea how it is that you shoot free throws like Steph Curry when they're chanting it, but hitting a baseball is so hard that you can't really think about that stuff."

Bellinger had compiled a major league-best 4.7 FanGraphs wins above replacement (WAR) heading into Wednesday's game against the Arizona Diamondbacks, a mark that was topped by only 37 players through the entire 2018 season.

His .374 batting average and .734 slugging percentage rank first in baseball. His .461 on-base percentage trails only Mike Trout, who constantly gets pitched around. His 20 home runs trail just Christian Yelich, perhaps the only man who can give him competition for the MVP.

The most impressive aspect, according to Dodgers closer Kenley Jansen, is "how it all started."

"It all started after a disappointing season," Jansen said of Bellinger. "That's what I like about it. A lot of things can go wrong in the offseason. Like, which way is he going to go? Are you going to go about it the right way? He took it like a humbling experience and put that work in, in the offseason, and, I mean, he's one of the best players on the planet right now. That's pretty impressive. One offseason, and he's taking us on this joyride."

Bellinger wasn't bad last year, but he wasn't great. He was the National League's Rookie of the Year in 2017, then suffered a mild case of the proverbial sophomore slump in 2018, his OPS dropping by 119 points. He felt lost early and was thrust into a platoon role late, sitting against left-handed pitchers. Then he went to work.

Bellinger split his offseason with the Dodgers' two principal hitting coaches, getting instruction from Robert Van Scoyoc in Los Angeles and Brant Brown in Arizona. They worked to get Bellinger closer to the load and swing he displayed as a rookie, but also to help him understand his mechanics like never before. When spring training arrived, Bellinger vowed to play every day and asked to remain mostly at one position. He told some of his teammates that he was bound for a great season.

"When a guy like that throws that out there, you believe him," Dodgers infielder David Freese said. "He's that type of player."

Freese has been impressed with the way Bellinger has handled "the game within the game" -- adjusting between at-bats, formulating a clear plan for each situation, displaying what Freese called "controlled aggression." Second baseman Enrique Hernandez sees a player who recognizes when to shorten up his swing. Brown has noticed that Bellinger is much better at self-correction, which speaks to his growing maturity.

It has all helped Bellinger accumulate more walks (36) than strikeouts (35), a remarkable development for a player who struck out 164 more times than he walked over the past two seasons combined.

"If he stays on the contact percentage that he's putting up right now, I think he can keep it up," Hernandez said. "He takes a half-swing and he can hit a homer, and then he can roll it over and he can beat it out."

Hernandez called Bellinger's speed "sneaky." He joked that Bellinger's running style resembles the awkwardness of an iguana more than the grace of a gazelle, but when asked which Dodgers player was faster, Hernandez answered sternly: "Nobody. Nobody."

And perhaps nobody in the entire league is better defensively.

Bellinger has already compiled 27 defensive runs saved, more than anybody in the majors. His eight outfield assists are tied with Leury Garcia of the Chicago White Sox for first place.

Bellinger came up as a first baseman and developed into the best Hernandez had ever seen at that position. Last year, with Max Muncy coming on, Bellinger spent a lot of time in center field and quickly became the Dodgers' best option there. He entered this season with less than 100 professional innings in right field but has already contributed an array of indelible moments.

Such as this one, to preserve Hyun-Jin Ryu's no-hit bid in the sixth inning. Or this one, a sprawling backhanded catch on a sinking line drive. Or this one, to rob Yelich of a home run one inning before hitting the go-ahead homer himself. Or this one, to nail Carlos Gomez at third base and end a bases-loaded threat.

Win probability added (WPA) rates a player based on how each of his actions affects his team's chances of winning. Unlike WAR, which strips away most of the circumstances players can't control, WPA factors the gravity of situations. It isn't the best predictive tool, but it might be the best at summarizing someone's impact on a season. Bellinger -- the star of a Dodgers team that owns the NL's best record -- boasted a 3.50 WPA through the first 50 games of 2019, a pace that would produce an 11.34 mark for a full season.

The only player who has ever done better: Barry Bonds.

"At this point," Hernandez said of Bellinger, "I wouldn't be surprised if he just has a full season of this."

Dodgers manager Dave Roberts played with Bonds late in his career but never saw him combine defensive prowess with offensive dominance the way Bellinger has this season. Last week, when asked if he had ever seen a player make such an impact, Roberts summoned Trout's name because nothing else made sense.

In recent days, Hernandez has used another name to reference Bellinger: "Cheat Code."