We've all seen the ridiculous moon-orbiting blasts and never-ending barrage of home runs. On Sunday, the Nationals tied a record with four consecutive home runs. On Monday, the Diamondbacks and Phillies set a record by combining for 13 home runs. On Tuesday, the Braves hit four home runs in one inning. Jerad Eickhoff allowed five home runs on Monday, and Chris Archer did it on Tuesday.

Needless to say, MLB is once again set to shatter the record for total home runs. There were 6,105 home runs in 2017. We're on pace for 6,566 in 2019 -- nearly 1,000 more home runs than there were in 2018. It's not just the quantity but also the apparent cheapness of many of the home runs, seemingly lazy fly balls that land in the bleachers. As Buster Olney said on his podcast the other day, "How many times have we heard announcers say, 'I can't believe that one went out'?"

Compared with last season, runs per game are up 0.27, and home runs are up 0.20 per game. Yes, hitters are going for launch angle and all-or-nothing swings while accepting even more strikeouts, but something is clearly up with the ball. The juiced ball of 2017 has returned with rockets attached this time.

Now it's time for a little history lesson. This kind of dramatic season-to-season increase in offense has occurred at various times throughout major league history, with increases traced directly to changes (intentional or not) to the ball. Let's look at some of those seasons and see what happened.

For decades, the National League (and later the American) used a ball produced by the A.G. Spalding Company, founded by White Sox pitcher Albert Spalding in 1876 to manufacture a standard ball for the new professional league. Prior to that, balls were of inconsistent standards and quality. (The American League ball bore a "Reach" label, but Spalding was the actual manufacturer.)

How baseball should fix the ball 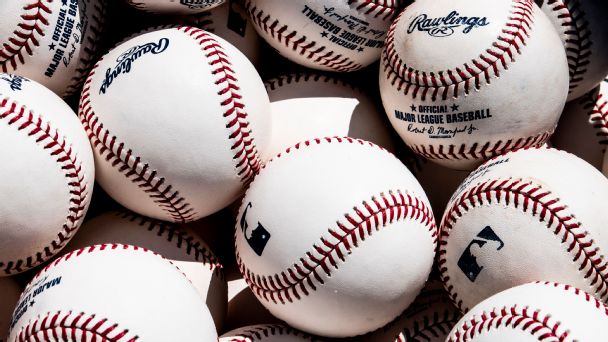 Home runs are hopping at a rate that makes the game almost unrecognizable, and you don't need to go far to find a big reason. Bradford Doolittle

That ball included a rubber core, but during the 1910 World Series, a cork-centered ball was used -- yes, imagine changing the ball that had been used all season for the World Series -- and the cork-centered ball became the new standard. Even though it was still the dead ball era, the increase in runs per game remains the largest year-to-year increase in any season since 1900.

The offensive gains proved short-lived, however. Runs per game went from 4.51 in 1911 and 4.53 in 1912 all the way down to 3.56 by 1916. According to John McMurray of SABR's dead ball era committee in a 2011 New York Times article, a pitcher named Russ Ford started scuffing the ball, which soon became a widespread tactic. Add various forms of the spitball, and offense fell back to low levels.

The so-called "lively ball" era began in 1920 (runs increased from 3.88 to 4.36 from 1919 to 1920), though the initial increase wasn't so much the result of a different ball. There were two other reasons: (A) banning the spitball; (B) using new balls throughout the game rather than dirty, scuffed-up ones. Babe Ruth began slugging home runs, and the new style of power hitting quickly took over.

Some of the individual highlights:

-- Freddie Lindstrom of the Giants hit .379 and became one of the worst Hall of Fame selections ever on the strength of that season.

That was just in the National League.

Giants manager John McGraw suggested the owners needed to fix the ball. "It has taken the confidence out of the pitchers and is so lively the fielders cannot handle it," he said. He also proposed moving the pitching distance two feet closer to home plate. Cubs president Bill Veeck offered that the fans liked all the hitting. "It's the punch that has made baseball over in the last 10 years," he said.

Spalding had produced every baseball ever used in major league baseball, but it was kicked to the curb over an additional $25,000. "The reason is price," said Lee MacPhail, president of the American League. "We're sorry we're ending such a long and proud relationship. But we've been able to work something out with another manufacturer."

That manufacturer became Rawlings in 1977. Before it took over, however, offense nose-dived in 1976 to 3.99 runs per game. Only four players across the majors hit 30 home runs, and only 22 hit even 20. With Rawlings presumably manufacturing a higher quality ball in 1977 (plus new expansion teams in Seattle and Toronto slightly diluting the pitching), 19 players hit 30-plus home runs, and 56 hit at least 20. Among the big hitters:

-- George Foster of the Reds slugged 52 home runs, the first 50-homer slugger since Willie Mays in 1965.

-- The Dodgers had four players hit 30-plus home runs (Steve Garvey, Reggie Smith, Dusty Baker, Davey Lopes), the first time four teammates had done that (11 teams have done it since, all since 1995).

The first sentence in Frank Deford's column in the July 27 edition of Sports Illustrated asked the question on everyone's mind: "If the baseball is juiced up, who's responsible?" Deford dismissed any conspiracy to change the ball -- something would have leaked if that were the case, he surmised -- and attempted rational explanations for the home run explosion that season. Batters were stronger, a generation of pitchers was on the defensive due to growing up facing aluminum bats and throwing too many breaking balls, and the best athletes had chosen hitting as their trade.

Or this: "The last incredible generation of pitchers -- Gibson, Marichal, Koosman, Seaver, Palmer, Sutton, Hunter, John, Jenkins, Carlton, Tiant, the Perrys and the Niekros -- was the product of that postwar time when traditional philosophy still prevailed: discipline and dedication, the Protestant ethic and the commitment to the long haul." Pitchers weren't tough enough. Or something. George Will went with the aluminum bat theory and increased weight training. Pirates GM Syd Thrift said pitchers were being rushed to the majors. Braves catcher Ozzie Virgil said the bats were better.

It was the ball. That was the prevailing theory from those in the game. Tigers manager Sparky Anderson referred to the "nitroglycerin ball." Astros pitcher Mike Scott said the balls were going farther. Reds manager Pete Rose said the ball was definitely livelier.

Four of the six highest individual home run seasons in the 1980s came in 1987. Eight of the top 14 OPS seasons in the decade came in 1987. As Matthew Pouliot pointed out in an article several years ago, perhaps no player benefited from the 1987 rabbit ball more than Dawson. He won MVP honors for a last-place Cubs team on the strength of those 49 home runs and a league-leading 137 RBIs. His second-highest home run total in his career: 32. Without that 49-homer season and MVP award, he might not have made the Hall of Fame.

Then, just like that, the ball was dead. In 1987, only four starting pitchers had a sub-3.00 ERA. In 1988, 20 pitchers achieved that mark. The sport entered a five-year span with a relative lull in offense.

After the lull came the explosion. In a two-year span, runs per game went from 4.12 to 4.60 to 4.92. Home runs per game increased from 0.72 to 0.89 to 1.03. Yes, the Rockies joined the National League in 1993, helping to create more offense, but that alone hardly explains a half-run per game increase. Indeed, the American League -- without games in Colorado -- went from 4.32 runs to 4.71 to 5.23. No doubt, PED use was starting to spread across the sport, but the PED theory assumes the unlikelihood that everyone started using all at once.

Rays phenom Wander Franco will soon join Acuna, Vlad Jr. and Tatis among MLB's new generation of superstars. And he just might be better than all of them. Jeff Passan

So it was the ball. Something changed in the 1992-93 offseason. The full impact was felt more intensely over two seasons, but some of the individual increases in 1993 were dramatic:

And so on. So what happened? One suggestion is that it was around this time that Rawlings switched from hand manufacture of the core to machine manufacture, which resulted in more tightly wound cores. The offensive gains were only partially realized in 1993 due to some leftover balls from 1992 still existing in the pipeline.

There's your history lesson. It's a reminder that a baseball is a lot more complex object than it might appear.