I don't know if that's the craziest statistic in a season full of insanity, but it's certainly one of those numbers that pops like a Jackson Pollock painting. Marte is on pace for 44 home runs -- after entering the year with 22 career home runs in 1,399 at-bats. That's one home run every 63.6 at-bats. In 2019, he's homering every 14.5 at-bats. That's the career rate for Sammy Sosa and is better than Manny Ramirez, Mickey Mantle and Ken Griffey Jr.

Marte reached the majors in 2015 as a speed-first shortstop whom the Mariners envisioned as their future leadoff hitter. In his two seasons with Seattle, he hit three home runs in 656 at-bats, about a full season of playing time, and when his plate discipline deteriorated in his second season and he struggled on defense, the Mariners included him as the second piece alongside Taijuan Walker in the trade that brought Jean Segura and Mitch Haniger to Seattle.

That was Mike Hazen's first big trade as Arizona's general manager, and though Walker helped the Diamondbacks to a wild card in 2017 before he blew out his elbow last season, Marte's emergence is making the deal look much better for Hazen than it did the first couple of seasons. 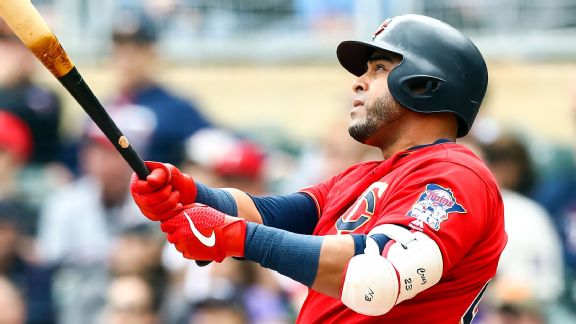 The 25-year-old switch-hitter has filled out a once-skinny frame and has added strength. He showed signs of power potential with 14 home runs in 2018, but nobody could have forecast this kind of outburst.

"The results are matching the potential," Diamondbacks manager Torey Lovullo told the Arizona Republic. "Dynamic, exciting, those are single words that I can use. He's a mature baseball player today compared to when we first met him. ... He's matured in a way where he feels he's one of the top players, and you can tell by looking at him. But he's still humble and would never outwardly say that."

Working with new hitting coach Darnell Coles, Marte has tapped into his strength by -- yes -- changing his launch angle. His average angle has gone from 5.7 degrees to 11.2, meaning more fly balls and more home runs.

Marte's power comes from a good foundation of contact hitting, however. Last season he had the 19th-lowest strikeout rate among qualified batters. His strikeout and walk rates were basically identical to Anthony Rendon's. He has been more aggressive this year, and while that has led to a few more strikeouts and a little more chasing out of the zone, it has paid dividends in the power department.

That means Marte isn't the only surprise performer on the home run leaderboard. In honor of Marte's booming start, let's select the 2019 Ketel Marte All-Star team, focusing on this year's surprise power hitters who have never made a real All-Star team.

Bell came up as a consensus top-40 overall prospect and slugged 26 home runs as a rookie in 2017. He hit just 12 homers in 2018, however, and everyone kind of forgot about him. He's leading the National League in total bases, doubles and RBIs while hitting .321/.388/.653. His big key: being more aggressive in the right counts. He's swinging about 7 percent more often, 11 percent more often at pitches in the zone and 11 percent more often on first pitches.

Lowe -- rhymes with "ow," which is the hurt he's putting on the baseball -- hit 28 home runs last year between Double-A, Triple-A and the majors, so maybe this output isn't a complete surprise. Still, he wasn't guaranteed a regular gig coming out of spring training, but Joey Wendle's injury opened up some playing time. Lowe is not very big (listed at 5-foot-10, 185 pounds, which is generous), but Lowe takes a mighty hack at the ball with a big hip turn. That approach results in whiffs (33.5 percent strikeout rate), but he has still managed to hit .289 thanks to a .393 BABIP.

As a rookie in 2014, La Stella hit one home run in 319 at-bats. That was his game, and he has been a solid bench guy/pinch hitter ever since, entering 2018 with 10 home runs in 828 career at-bats. So, of course, he has 15 bombs. La Stella's average exit velocity is actually right in line with his career average and his ground ball rate remains unchanged. He has barreled up a few more balls and doesn't strike out much, but this looks like a prime example of somebody who has clearly benefited from the rabbit ball.

One of the annoying things about the launch angle revolution is the implied suggestion that hitters are doing something they've never done before -- changing their swings to generate more fly balls. Nonsense. Take Kirby Puckett, off the top of my head. He hit four home runs his first two seasons and then broke out with 31 in 1986. What do you think he did to do that? Are more guys doing it now? Sure. In part because the juiced ball rewards that approach. But players are also bigger and stronger. If Marte had played in the 1980s, he probably would have remained a skinny shortstop who slapped the ball around and tried to hit .275. Now he's a bulked-up power hitter.

Renfroe hit 26 home runs in each of the previous two seasons and is a former first-round pick, so his raw power has never been at issue. But are you kidding? He's on pace for 52 home runs in just 466 at-bats! He's slugging .647! He leads the majors in at-bats per home run (9.00), just ahead of Christian Yelich and Gary Sanchez. He's still the same hitter he has been -- low OBP, high strikeout rate -- but after a three-homer game and two-homer game in Colorado over the weekend, he has moved into a tie with Cody Bellinger and Peter Alonso, behind only Yelich in home runs.

Once a touted prospect out of Cuba, Soler has never hit enough or remained healthy enough to get 400 at-bats in a season. He hit 11 home runs the past two seasons, but he has remained in the lineup and could challenge Mike Moustakas' club record of 38 homers.

Out of options, the Mariners had to keep Vogelbach on the roster, but he started only one of the team's first seven games. Then he homered in four straight games, and now he could end up as the Mariners' All-Star rep. Vogelbach's career high in the minors was 23 home runs, so despite his Chris Farley body he has really been more of an all-around hitter than a pure power guy. Now he's both. How much fun would he be in the Home Run Derby?

He hasn't homered since May 28 (when he hit three in one game), he sits against lefties ... and he's still on pace for 39 home runs. Ted Williams reached 39 home runs once in his career. (Just to be clear, I am not comparing Derek Dietrich to Ted Williams.)