In 2017, the Denver Post profiled Tony Cowell, the Coors Field stadium engineer who -- inspired by an uncomfortable pair of leather hunting boots -- conceived of a humidor that would bring Coors Field's extraordinary offensive environment to heel.

"People were disparaging Coors Field, and that really bothered me," Cowell said in that profile. "Look, I knew that baseball here wasn't really normal big league baseball. I wanted to do something about that."

The humidor worked. According to Baseball Reference, Coors Field's Three-Year Park Factor -- a measure of how much offense a park allows, relative to other parks -- was 125 from 1999 to 2001, or 25 percent more conducive to scoring than other parks. From 2002 to 2004, that park factor dropped to 115, and it kept sinking. From 2006 to 2008, offense was just 7 percent higher than average. We all generally accept that the humidor has, as Cowell put it, "normalize[d] things a little bit."

This week, the Los Angeles Dodgers -- with one of the greatest starting rotations in baseball history -- visited Colorado. Walker Buehler started the Thursday night game, coming off a 16-strikeout, no-walk, complete game against the Rockies in Los Angeles the previous Sunday. In June, Buehler had 42 strikeouts and one walk, with a 0.87 ERA in four starts. But he got rocked at Coors Field, allowing 13 hits and seven runs. Then Hyun-Jin Ryu started Friday, entering the game with a 1.27 ERA. He couldn't get an out in the fifth inning before he was replaced, having allowed seven runs. Four innings at altitude made his ERA jump almost 50 percent.

It took 18 seasons after Cowell's miracle cure for altitude, but Coors Field has fought back. Its Park Factor has been steadily rising, and this year it has reached a new post-humidor extreme. Nothing in that park is normal anymore. To put baseball in Colorado in perspective, here are 18 facts about Coors Field this year. Some of these have bright-red "Small Sample!" flags, but they're all a wonder to say aloud:

1. At Baseball-Reference, Coors' Multi-Year Park Factor (which includes this year and last) is 120, the highest it has been since the humidor was installed. ESPN publishes a simpler, single-season Park Factor, and according to that measure, Coors Field this year has the highest park factor for scoring since at least 2001, the final pre-humidor season.

4. The Rockies hitters have a tOPS+ (which, again, is their OPS in this split relative to their OPS overall) of 135 this year. That's the second-highest team tOPS+ in Rockies history -- and in all of major league history.

5. Rockies pitchers have the third-highest tOPS+ in franchise history (and the third-highest in major league history). The two years that were more extreme for Rockies pitchers are actually different than the one year that was more extreme for Rockies hitters, so there has never been a season when both pitchers' and hitters' tOPS+ were higher than for this year's Rockies.

Brewers' Yelich on a historic tear 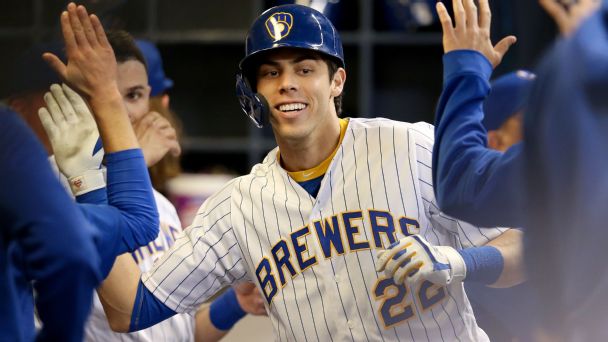 11. Rockies pitchers have a 3.90 ERA on the road, which is the fourth-lowest mark in baseball. Just to rephrase that so it is extremely obvious and extremely clear: Once the effect of the home ballpark is stripped away, the Rockies arguably have had the fourth-best pitching staff in the majors, or at least the second best in the National League. Those same pitchers have a 6.45 ERA at home, which is the second-worst home ERA since at least integration (better only than the 1999 Rockies). The Rockies are 23-16 at home and just 20-23 on the road.

12. Rockies pitchers have struck out fewer batters at home, but it's not a huge difference; and they've also walked slightly fewer batters at home. Indeed, almost all of the difference for their pitchers is on batted balls -- and what happens to those batted balls. Their FIP -- which focuses only on strikeouts, walks and home runs, and estimates what ERA should be -- is 5.13 at home road and 4.44 on the road, a much smaller gap than in ERA. By xFIP, which focuses only on strikeouts, walks and fly ball (rather than home run) rates, there's virtually no difference: 4.57 at home and 4.36 on the road.

If Rockies pitchers were giving up way more hard contact, that would be easily explained, but they actually have allowed a lower exit velocity at home, and according to Statcast's xwOBA (.346 at home, .337 on the road), they've allowed similar quality of contact. Quality of contact is more complicated than that, but all of this together suggests that Rockies pitchers aren't pitching worse at home, but that the same batted balls are doing far, far, far more damage in Colorado. 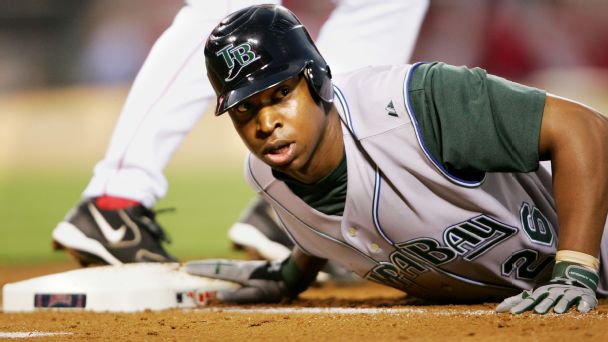 How the Tampa Bay Rays flipped a bust for 15 years of talent. Sam Miller »

18. Why? That's more complicated -- and a subject for another article (pending, perhaps, a few more months to see whether this regresses to less extreme levels, as Valaika's line surely will). The simplest hypothesis would be that when leaguewide offense is up -- as it is now, thanks to MLB's livelier ball -- it affects Coors Field most of all. But since 2001, there hasn't been any statistical correlation between Coors Field's single-year Park Factor and MLB's overall offensive environment.

That doesn't rule out a connection: Baseball is profoundly weird right now, and nearly every on-field trend ultimately can be linked to either rising strikeouts or rising home runs (or both). Coors Field also is profoundly weird right now, and the two might ultimately be linked. But altitude has been one of the most persistent forces in baseball since the Rockies' first game in 1993. Maybe altitude will always find a way.