CLEVELAND -- The leadoff hitter for the National League All-Stars is reigning MVP Christian Yelich, who has 31 home runs at the break. The No. 9 hitter will be 21-year-old Ronald Acuna Jr., who has matched his age already with 21 first-half home runs. The low power man in the NL starting nine is catcher Willson Contreras, with a mere 18 home runs.

That means all nine starters are on pace to hit 30-plus home runs. Given the record barrage of home runs across the sport in 2019, it's not a big surprise that the NL lineup may be the most power-packed in All-Star history.

"It means there's a lot of talent in the game right now," Yelich said Monday. "I saw they had Acuna hitting ninth. I don't know how many times he's ever hit ninth in his life, but when you have a player of that caliber hitting ninth, it speaks to the depth of talent."

It's also a youthful group of sluggers, none of them even 30 years old yet. The average age of the NL starters is the youngest in All-Star history. "I guess we're doing something good," Cubs shortstop Javier Baez, the No. 2 hitter in Dave Roberts' lineup with 22 home runs, said with a laugh. "It's crazy how you see all this young talent. It's great that the kids are learning so fast."

It's also crazy that Baez, still just 26 years but already in his sixth major league season, refers to the next generation of stars like Acuna as kids.

"If I wanted to hit .300, I'd hit .300," Astros third baseman Alex Bregman said. "It's an OPS game, though. It's about driving the baseball and getting on base, walks and extra-base hits. If it turned into an average game, I'd get the ball out of the air and hit line drives and hit .330.

The Futures Game, Home Run Derby and the Midsummer Classic were at Progressive Field in Cleveland. Full coverage »

"All the hitters care about now is OPS. We don't care about batting average. Some guys do, I guess. Batting average is an old stat that doesn't matter. It's OPS, runs created, WAR. Look at Mike Trout's numbers. There are guys that hit .340. Mike Trout is hitting, what, .300 on the dot? I'd rather have Mike Trout's numbers with all the walks and the damage than the guy who hits .340 [with a bunch of singles]. It's an OPS game."

Indeed, Bregman hits the All-Star break with a .265 batting average but ranks third in the American League in OPS and third in on-base percentage. He's not hitting close to .300, but he's been one of the best run producers in the league. That's what matters.

While Yelich says he tries not to look at his stat line during the season, he also cited OPS as a simple measure of how's he producing. "Everyone talks about that now," he said. "That's a big one. To score runs, you gotta get on base and you have to slug, and that's pretty much OPS in a nutshell."

Of course, many fans cry about the lack of singles and the rise in strikeouts. Many still romanticize the .300 hitter, Tony Gwynn or Wade Boggs slapping singles to the opposite field and hitting .350. During the steroid era, the MLB-wide batting average peaked at .271 in 1999 -- when 55 qualifiers hit .300, the most in a season since the pitching mound was lowered in 1999. Still, the .300 hitter is hardly dead, even with pitchers throwing harder than ever. Twenty-five players hit the break hitting .300, with Jeff McNeil of the Mets leading the majors with a .349 average. That's on par with the number of .300 hitters across the majors in recent seasons, although admittedly down from what we saw 20 years ago:

Also, hitting is hard! Heck, just five years ago, after offense dropped to its lowest levels in more than two decades in 2014, the big story was that nobody could hit. The hitters -- yes, with help from the juiced baseball -- have gained their revenge. They got better.

"I think you just learn," said Colorado Rockies third baseman Nolan Arenado. "Fastballs are so hard and [pitchers] are spinning the ball. You learn that you don't have to do too much to make things happen. I think that's helped me as a baseball player, because you think if someone's throwing hard you have to swing even harder, and I learned just to take a nice smooth swing and put the barrel on the ball and the ball's going to fly. I learned that, and I think these young guys have learned that pretty quickly and they know how to do it, and that's why a lot of homers are happening."

Plus, hitting .300 isn't easy. "It's power hitting and power pitching," said Braves first baseman Freddie Freeman, the old man in the NL starting lineup at 29 years old. "That's what it is now. Players are combating high heaters by swinging up and hitting homers. I think the game changes every few years. Three years from now we'll be talking about how the game is a little different again."

Home runs may rule the day, and players know it's easier to score one run with one big swing then three singles, but that doesn't mean they're not impressed by a .300 hitter. Asked if it's more difficult these days to hit .330 or to hit 35 home runs, Freeman laughed. "I think hitting .300 is the hardest thing. You can hit homers. That's where we're at. I have Josh Donaldson on my team, and he asked if you'd rather hit .260 with 50 home runs or .300 with 20 home runs. I always say .300 with 20, but that's just me. I like that '3' in front of the batting average."

It's also not easy to just go up there and hit a ground ball in the hole for a base hit -- no matter what fans may think.

"If you do that, you're not going to have a great approach," Freeman said. "You're just going to lunge at everything just to put it into play. There are certain hitters like Tony Gwynn who can do that, but in today's game I'd say it's a little different, you just have to try to grind out an at-bat. Hitting a round ball with a round bat is the hardest thing to do, and asking yourself to place it somewhere, you just can't really do that. Even bunting the ball is really, really hard."

Mookie Betts, who hit .346 to win the AL batting title last season and is at .272 this season, said hitting .340 is definitely harder than hitting 40 home runs -- although not necessarily more impressive. "The pitchers are a lot better, but some guys have managed to hit a lot of home runs because they found something that worked for them. It's always a cat and mouse game, but .340 is pretty impressive, and so is 30 home runs at the All-Star break."

Maybe we need a pitcher's perspective on this. Gerrit Cole -- after a long pause to think through his answer -- started to say hitting .340, but then interrupted himself and said, "Forty home runs is a lot, though. Forty home runs. I could be wrong, though. I like Jose [Altuve]. I like that idea of spraying the ball around. I watch a lot of baseball for a living, about 130 games a year, and as much I love to see a home run, I love to see a double in the gap and then a guy go run after the ball, so you have a great defensive play and a great swing and great hit. That would be my preference, but 40 home runs is a lot of home runs." 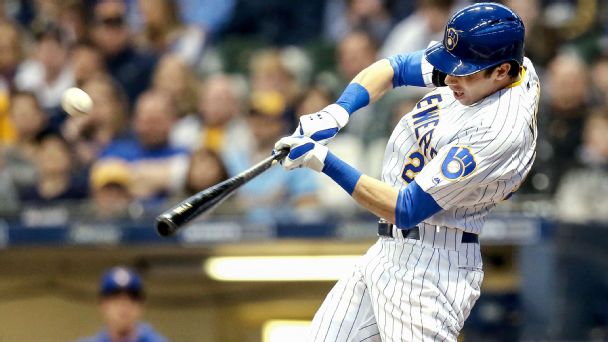 Pitchers are better than ever. Here's what hitters are doing to cope as a once-sacred number seems to be losing its place in the game. Bradford Doolittle

Cody Bellinger is one hitter who can actually somewhat relate to this question because he's hitting .336 with 31 home runs. "I always felt like I could be an average guy, not to say I'm going to hit .340. It's just nice to see results. I don't which is harder. They're both pretty special."

Asked about hitting 40 home runs or .340, Arenado laughed. "I've hit 40 home runs before. I would love to hit .340; that would be so sweet," he said with smile. "But 40 homers looks pretty cool on a baseball card. I don't know, I'd probably say .340. Sleep way better at night knowing that you're getting hits all the time."

Bregman, not surprisingly, had a different answer to that question: "Look at the OPS."