During Sunday's 11-4 win over the Los Angeles Dodgers, Strasburg was downright dominant. Facing a potent lineup that's borderline omnipotent against righties, Strasburg limited L.A. to a run and two hits over seven innings. He struck out nine and didn't walk a batter. According to ESPN Stats & Information, it was only the fifth time this season that a right-hander has held the Dodgers -- who own baseball's best record (69-38), and boast an .834 OPS against righties (best in the NL) -- to one run or fewer. Of those outings, the only pitcher to give up two hits or fewer was Yu Darvish of the Chicago Cubs. All of which is to say, Strasburg was really good. Again.

Unfortunately for the Nationals, Strasburg isn't scheduled to take the hill again until Friday, which means he'll be a nonfactor when the first-place Braves visit D.C. for a key three-game set that starts Monday. But right now, that's the least of Washington's worries.

As for the top of Washington's worries, right now that'd be Scherzer. Following Sunday's win over L.A., manager Dave Martinez said that his ace probably would miss his next scheduled start, on Tuesday against Atlanta. On Monday afternoon, Scherzer was placed on the 10-day injured list. Although it's not ideal for June's NL pitcher of the month to miss a huge July series against the Braves, it would be infinitely less troublesome if it were just a single, solitary start.

But Scherzer has already missed time this month. Given that he was lifted after only five innings and 85 pitches (both very un-Scherzerian totals) in his return from the injured list, and given that he received a stem cell shot in his barking back the next day and hasn't thrown at all since, it's entirely possible that his health issues could linger well into August. In the meantime, the Nationals are focused on the last three days of July.

"You can make up some ground because you're playing the people that are in first," second baseman Brian Dozier said.

Sure, the Braves have a comfortable 5½-game lead over Washington and spent the first half of the season looking like one of MLB's elite teams, but they've been mortal since the All-Star break. On Sunday, they fell 9-4 to the Philadelphia Phillies, their seventh loss in their past 11 games. Over the weekend, they lost shortstop Dansby Swanson and right fielder Nick Markakis to the injured list. Although Swanson's bruised foot shouldn't keep him out for too long, Markakis has a broken wrist that's expected to sideline him for six to eight weeks. Despite the Braves' potential flaws, and despite the opportunity to close the gap, the Nationals aren't putting too much emphasis on the series. At least not publicly.

"Every game's important," Strasburg said following Sunday's win. "I think it's at that point in the year where we just have to keep our heads down, not look at the scoreboard. It's a sprint to the finish line now. Whoever we've got, we're going to give it everything we have and let the chips fall as they may."

Of course, what Strasburg and the Nationals have right now is different than what they might have come Wednesday afternoon at 4 p.m. ET, when the end of MLB's trade deadline arrives. Of all the contenders that need relief help, and there are oodles, Washington is right at the front of the line. Although the bullpen dominoes are finally starting to fall -- over the weekend, the Oakland Athletics acquired lefty Jake Diekman from the Kansas City Royals, and the Minnesota Twins grabbed veteran Sergio Romo from the Miami Marlins -- the wild-card leading Nats have yet to make the trade (or two) that everyone is expecting them to make.

In the meantime, their bullpen, which sports a 6.07 ERA (worst in the majors), continues to be the weakest of weak links. And Scherzer's injury issues, which have robbed Washington of one of the game's most dependable workhorses, only figure to tax an already paper-thin bullpen even more. Which brings us back to Strasburg. 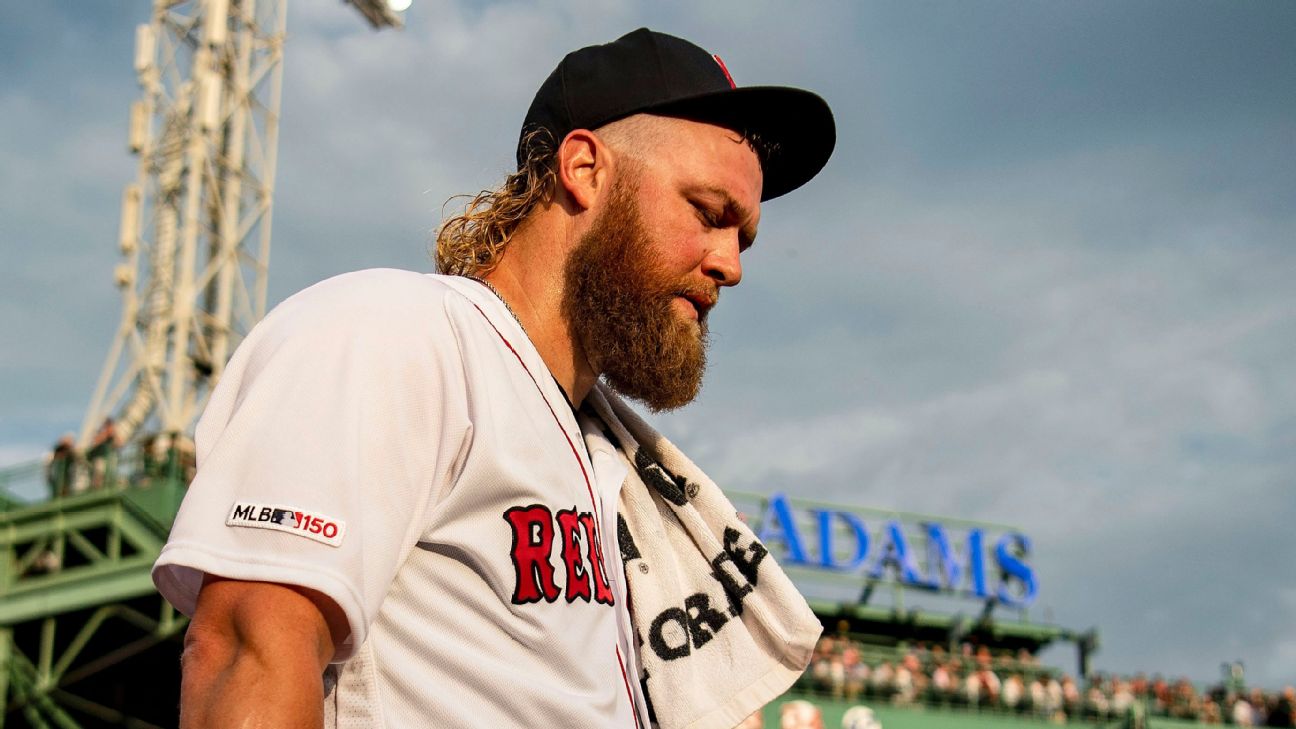 "He's been unbelievable," Martinez said about the former top overall pick, who has a 3.26 ERA, leads the majors in wins (14-4) and is on pace to set a career high for innings pitched. He has even been productive at the plate, where he's currently riding a three-game hit streak and has more RBIs this month (six) than earned runs allowed (four). "Everything about him this year has been amazing."

Perhaps the most amazing thing about Strasburg, as far as Martinez and the Nats are concerned, is that he has been able to stay healthy this season. Over the past few years, it usually has been Strasburg -- a supremely talented hurler who has developed a reputation for being fragile -- who ends up missing time, while the indestructible Scherzer picks up the slack. Lately though, their roles have been reversed.

"I think that's something that you guys want to make a bigger point of it," said Strasburg, downplaying the notion that his brilliant July (5-0, 1.14 ERA) is somehow more meaningful because it has come at a time when Washington has been missing its ace. "But if you ask anybody in here, when it's our time to go, we're here to help the team win some games."

When the Braves come to town this week, odds are that neither Strasburg nor Scherzer will be helping the Nationals win any games. That is, unless Strasburg gets deployed as a pinch hitter.

"Yeah," Strasburg said with a self-deprecating laugh when reminded that he kept his hitting streak alive Sunday. "It's better to be lucky than good sometimes."

Right now, the Nationals will take either one.