The birth of the walk-off home run. A playoff ace afraid of being poisoned. Mr. October going unrecognized. Mr. November's advice to the commander in chief. A home run still orbiting the Earth.

Each week during the playoffs, Tim Kurkjian has opened up his notebook to share behind-the-scenes stories of some of the wildest games, moments and characters in MLB postseason history.

We revealed a new decade of vignettes right here all month.

Reggie Jackson was the Straw That Stirs The Drink, but he was and always will be Mr. October.

In the 1977 World Series against the Dodgers, he became the first player since Babe Ruth to hit three home runs in a World Series game. In those three at-bats in the clinching Game 6 at Yankee Stadium, Jackson saw one pitch each from Burt Hooton (fourth inning), Elias Sosa (fifth) and Charlie Hough (eighth), and he homered on each pitch. The final blast against Hough landed in the black seats beyond the center-field fence.

Reggie remains fiercely proud of his Hall of Fame career, and mostly his production in the most important month of the season. Reggie is 73 years old, but he is still Reggie. That will never change. He is a special assistant for the Yankees and travels with the club on occasion, including in the postseason.

In 2017, the Yankees played the Indians in the American League Division Series. Reggie arrived at the Yankees clubhouse before a game at Progressive Field, but he did not have his credential. The nice, but young, security guard denied him access to the clubhouse because he had no idea who Reggie was.

"What is your name?" the security guard asked.

Reggie was, naturally, insulted. He gave him his name.

"How do you spell that?" he was asked.

I believe Nov. 2, 2016, was the greatest night in major league history.

It was Game 7 of the World Series. The Cubs hadn't won it all since 1908. The Indians hadn't won it all since 1948. Cubs president Theo Epstein had already helped break the curse with the Red Sox in 2004, now he was trying to do the same with Chicago. Indians manager Tito Francona, who had managed that 2004 Red Sox team, was trying to win in Cleveland, a city which meant so much to him because it's where his dad had many of his best years as a ballplayer.

It was a perfect night for baseball, unbelievably comfortable for early November in Cleveland. The game was filled with remarkable stuff, including Cubs catcher David Ross becoming the oldest player (38) to hit a home run in Game 7 of a World Series, later becoming the only to player to hit a home run in Game 7, then retire. And in the eighth inning of that game, the Indians' Rajai Davis, who hadn't hit a home run since Aug. 30, hit a game-tying, two-run homer off Cubs closer Aroldis Chapman, who hadn't given up a homer since June 18.

A brief rain delay perhaps cost the Indians some momentum, but the Cubs won with one run in the 10th, and Cubs first baseman Anthony Rizzo had the wherewithal to stuff the historic ball in his back pocket after catching the final out. It was an unforgettable night. More people watched that game, on all platforms, than any game in the history of baseball.

I got back to my hotel at roughly 1:30 a.m. A man, maybe my age, around 60, was standing next to the elevator. He was wearing a Cubs jersey. And he was sobbing. Weeping.

Eric Hosmer's father, Mike, is a firefighter. His mom, Ileana, escaped from Cuba at age 9. Each has harrowing tales to tell.

Their son learned courage from them, to take a chance, to be daring when necessary.

So, on a far less important and dangerous level, Eric Hosmer looked at the situation in Game 5 of the 2015 World Series. He looked at a potential Game 6 and 7, facing Noah Syndergaard and Jacob deGrom. Hosmer figured if there ever was a time to take a risk, this was it. 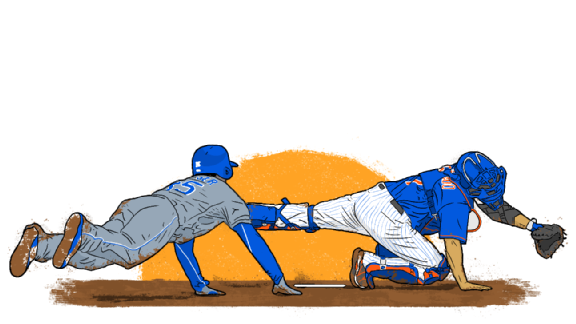 Tim Kurkjian looks back at the most important play of the 2015 World Series. Oral history »

His Kansas City Royals led the World Series, three games to one, but in the ninth inning of Game 5, they were trailing the Mets 2-1. Hosmer was at third base with one out. Salvy Perez was at the plate. The Mets' infield defense, their weakness, was playing in at the corners, and stationed halfway in the middle, exactly where the defense should have been playing. The Royals' pre-Series report from advance scouts Mike Toomey and Mike Pazik was clear: Make the Mets' infielders, especially first baseman Lucas Duda, throw the ball.

Perez hit a soft, broken-bat ground ball to the left of third baseman David Wright, who cut in front of shortstop Wilmer Flores, fielded the ball on one hop, looked briefly at Hosmer, who was 10 feet off the bag, then threw to first for the out.

The second Wright turned to throw, Hosmer took off for home. That seemed to startle Duda, who caught Wright's throw to retire Perez at first, but threw wildly to the plate. Hosmer scored. The Royals tied the game, then scored five in the 12th to win it, and the Series.

It marked the first time in World Series history that the tying run had scored on an infield out in the ninth inning or later since Game 7 in 1960, when Mickey Mantle alertly dove back into first base on a hard-hit ground ball, preventing a double play. The Yankees lost that game. The Royals won this game, and their first World Series since 1985.

"If he'd made a good throw, we would have packed our bags and gone back to Kansas City," Hosmer said. "And I'd stand in front of my locker like someone who lost his puppy and have to answer questions about it.

"But given all the factors, being up 3-1, it was a good time to take a risk. It worked out perfectly. I wouldn't have changed anything about that play."

With two outs in the ninth inning of Game 7 of the 2014 World Series, the Royals' Alex Gordon singled to left center, the ball was misplayed by two Giants outfielders, and suddenly, Gordon was racing toward third base with a chance to continue home with the tying run. The Royals, who hadn't won the World Series since 1985, were facing Giants ace Madison Bumgarner, who'd given up just one run in his 20 2/3 career innings in the Fall Classic.

So should the Royals, specifically third base coach Mike Jirschele, have sent Gordon home for a shot at what would have been the most amazingly ridiculous tour of the bases in World Series history?

"When I went home [to Omaha, Nebraska] after the season, it was the first question that I was asked by everyone I met: 'Do you think you could have scored?'" Gordon said. "After a while, I stopped them before they even finished the question, and said, 'No, I couldn't have.'"

He would have been out by 20 feet.

A high school baseball team in Kansas City replicated that play 10 times in practice one day in the offseason, "and nine times, they got the runner at the plate," said Gordon. "And that was a high school team, not the San Francisco Giants."

Said Giants shortstop Brandon Crawford: "I was panicked when the ball was bouncing around in the outfield. Once it got in my hands, I wasn't worried anymore because the ball was in my hands. I didn't have to depend on anyone else. If they had sent him home, I think he would have been out by a lot."

Gordon said he knows he will be asked about that play for the rest of his career, but said, "That's a good problem to have. I wouldn't view it as a negative. It was a really fun play to be a part of."

A couple of hours before the start of Game 2 of the 2014 National League Division Series, I stood on the field at Nationals Park talking to Nats first baseman Adam LaRoche.

Tim Hudson was pitching that night for the Giants. LaRoche and I were reminiscing about that amazing game (Oct. 9, 2005) at Minute Maid Park -- a game started by Hudson -- when LaRoche drove in four runs but the Astros beat his Braves 7-6 in 18 innings on a walk-off home run by Chris Burke. Many years later, Burke, an ESPN analyst, told me with a laugh, "Well, I sucked, so I knew they would throw me a fastball."

It was one of the greatest postseason games ever played. The Astros scored four runs in the eighth inning and one in the ninth (on a homer by light-hitting catcher Brad Ausmus) to tie it. It stayed 6-6 until Burke won it in 18. It was the longest postseason game, by innings, ever. Roger Clemens, who had started Game 2 of the series, pitched in relief and got the victory.

"What a crazy game," said LaRoche.

He left the field, looked at me, smiled and said, "Well, we won't be playing 18 innings tonight."

I saw LaRoche after the game. He smiled and said, "I'm not talking to you anymore."

David Freese received a baseball scholarship to the University of Missouri, but didn't play his freshman year because he had lost his love for the game. It was too stressful.

Freese's freshman roommate, on the first day, asked him what he did, what he liked to do.

"I used to play baseball, but I don't anymore," he said.

Five years later, when Cardinals manager Tony La Russa met Freese for the first time, La Russa said, "There is something special about this kid. I don't know what it is. I just know, he is built to do something big."

Three years after that, Freese -- who had found his passion for baseball again after taking that year off and transferring to St. Louis Community College-Meramec and later to South Alabama -- hit a walk-off home run in the 11th inning to win Game 6 of the 2011 World Series. The Cardinals had become the only team ever to win a postseason game they trailed by multiple runs in the ninth inning, and in extra innings. Leading the way was a guy who had once quit the game in college.

The day after the home run, and the day of Game 7 of the World Series, Freese went back to his high school in St. Louis and explained his journey to the massive assembly of kids.

"I barely slept last night, I was so tired, I'm not even sure what I said to them," Freese said an hour before the start of Game 7. "I just had to tell them that anything is possible, I am the living, breathing example."

The Cardinals won Game 7. David Freese will always be a hero in St. Louis.

Postseason baseball is filled with unlikely heroes, from Al Weis to Brian Doyle to Billy Bates. And on a higher level, Cody Ross.

The Giants acquired him from the Marlins on waivers on Aug. 22, 2010. In the only postseason of his career, he played in 15 games, he hit five home runs and had an OPS of 1.076, which helped the Giants win the World Series.