The regular season is coming down to the wire, with the wild-card races holding most of the drama and those teams poised for the postseason trying to position themselves for a deep run.

Here's what we'll be watching this weekend:

The Dodgers, who face the Mets on Sunday Night Baseball (ESPN, 7 p.m.), already have clinched their seventh straight National League West title. What is the best reason L.A. fans should be optimistic that this postseason will have the happy ending the previous six did not?

Eddie Matz: Three of the past four teams to clinch first have won the World Series: The '15 Royals, '16 Cubs and '18 Red Sox. So recent history favors the Dodgers, who were the first to clinch this year. Of course, the team that clinched first in 2017 and didn't win it all was ... the Dodgers. But I'm choosing to ignore that here because the question asked for optimism. Full disclosure? I'm not optimistic that L.A. (or any other NL team) can get past Atlanta right now. And even if they do, there's no getting past Houston.

Who has clinched a postseason spot, and who could be next?
Playoff tracker

Sam Miller: Two years ago, the Dodgers made a blockbuster July trade to get Yu Darvish. Darvish made two World Series starts, allowed nine runs in three total innings, and lost Game 7. Then last year, the Dodgers made a blockbuster July trade to get Manny Machado. Machado hit .182/.208/.182 in the World Series, and struck out to end the Series. This year, the Dodgers (/invoke forehead-tap meme) made no blockbuster July trades! The more sincere answer is that this is the best team the Dodgers have had in their recent run, one of the dozen best baseball teams in the past half-century, and -- with due respect to the Braves -- the more challenging side of the postseason bracket is in the American League. That all makes the Dodgers ... still underdogs against the field. A lot just has to go right.

David Schoenfield: I could overanalyze this, but the simplest answer is that Clayton Kershaw and Kenley Jansen are due. They've obviously been the Dodgers' best pitchers during this period and while both have had some good moments in the postseason, both have had more than a few absolutely crushing moments. Of course, the problem is that neither is as dominant as they once were and Kershaw isn't pitching that well at the moment and Jansen has the worst ERA of his career. ... Dang it, I'm supposed to instill optimism in Dodgers fans. So let's go with this: In the year of the home run, the Dodgers have hit the most home runs in the National League and allowed the second fewest. They're good at winning baseball games in 2019.

It looks as if the race for the best record in the American League could go down to the wire between the Astros and Yankees, with the No. 1 seed facing the wild-card game winner and the No. 2 seed most likely facing the Twins. Of the four potential first-round opponents, whom should Houston and New York most want to avoid?

Matz: Between the return of Mike Clevinger from injury and the emergence of Shane Bieber (a young Justin Verlander, anyone?), Cleveland has the best one-two punch of any of the four would-be first-round foes, and it's not particularly close. If I'm the Astros or Yankees, I'd be developing at least a mild case of Tribe-o-phobia.

Games to keep an eye on this weekend 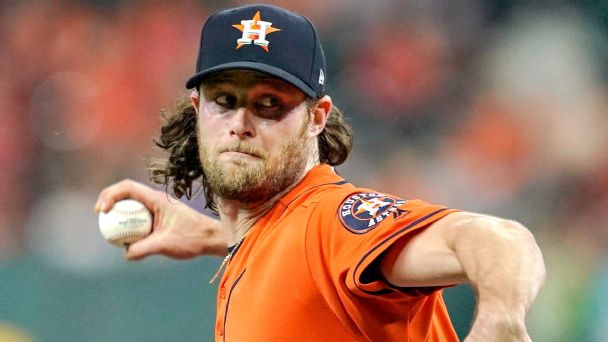 Dodgers at Mets, Sat., 7:10 p.m. -- Two Cy Young candidates square off, but L.A.'s Hyun-Jin Ryu and New York's Jacob deGrom are trending in opposite directions.
Brewers at Cardinals, Sat., 7:15 p.m. -- Milwaukee (somehow) is baseball's hottest team. St. Louis' Jack Flaherty is baseball's hottest starting pitcher. As long as everyone doesn't spontaneously combust, this should be quite a game.
Twins at Indians, Sun., 1:10 p.m. -- Another solid pitching matchup -- Jose Berrios vs. Shane Bieber -- as the Tribe fights for a wild-card spot and clings to slim hopes of catching Minnesota in the AL Central.
Dodgers at Mets, Sun., 7 p.m. (ESPN) -- If the rest of the weekend falls the Mets' way, Citi Field will be rocking and New York will be knocking on the door to the playoffs.
All times ET

Miller: We tend to so fetishize pitching -- especially in the postseason, and especially top-of-the-order starters -- that it's common to describe Tampa Bay or Cleveland, rather than Oakland or Minnesota, as particularly "dangerous in October." But there's not really a better way to be better in the postseason -- just being better, full stop, is almost always best. Of these four teams, Minnesota is probably the "better" team. They have eight 20-homer hitters this year -- that's a record -- and they're probably going to end up with 13 above-average hitters (minimum 200 plate appearances each), also a record. That's exhausting, especially when, as a pitcher, you have to treat every single pitch you throw as a potential run. Minnesota's pitching is just fine. Their offense is a siege, though, and I think we might be surprised to see what they can do even against great pitching staffs.

Schoenfield: Eddie and Sam both make good points. I'm going to go, however, with the A's, who have neither Cleveland's top-line starting pitching (but Oakland's pitching is better than you think) nor Minnesota's awesome power (but the A's do have plenty of it). Plus, there's this. Entering Thursday, the A's were 34-27 against teams above .500. The Twins were 30-35 and the Indians were 22-33. The AL Central is junk. The A's are the best team of the bunch. They just need to get in.

With the NL wild-card race changing by the minute, what will you be keeping an eye on this weekend among the contenders?

Matz: How the Brewers respond to losing Christian Yelich. Common sense says that they'll fold up like one of those paper thingamajigs that you used back in the fifth grade to forecast who you'd marry, where you'd live or what kind of car you'd drive (Google informs me that they're called paper fortune tellers). But common sense doesn't always prevail in times like these. Just ask Chuma Okeke and the Auburn basketball squad. By the way, prior to Yelich suffering that busted kneecap, Milwaukee was 9-4 this year in games that the reigning MVP didn't play. Just sayin'.

Miller: How the Cubs respond to losing their lead for the second wild-card spot. Common sense says they'll stiffen up their backs, draw on their veteran resilience, tap into the confidence that comes from four years of success and a recent World Series title. Maybe Joe Maddon will bring a giraffe on roller skates into the locker room to keep things loose. But common sense doesn't always prevail in times like these: After Wednesday's games, the Cubs' playoff odds dropped to 49.9%, their lowest since April, and down from 87% just a week ago. The Brewers had closed a five-game gap, and a bunch of teams that had seemingly been buried were back to hanging around, imposingly. The Cubs have the toughest schedule remaining, and their best player -- Javier Baez -- is out for the month. In the back of their minds, in the quiet voice of doubt they hear in the evenings between dinner and bed, they might even remember that way back in March a bunch of algorithms sort of warned about exactly this. They might wonder in those moments whether they're really good enough. So, do they panic? Probably not. This a good team that has won a lot, a team of players who have been winning together for a long time.

Schoenfield: How the Mets respond against the Dodgers now that they're back in the wild-card race. They have their rotation lined up with Noah Syndergaard going on Friday and Jacob deGrom on Saturday -- facing Kershaw and Hyun-Jin Ryu in two must-see matchups. They may also be catching the Dodgers at the right time as Kershaw and Ryu have both struggled of late -- Kershaw with a 5.73 ERA over his past four stars, Ryu with a 9.95 ERA over his past four. Max Muncy is out and Justin Turner is battling a sore ankle. It's set up as a big weekend for the Mets with huge crowds at Citi Field.

Friday night features a matchup of likely playoff teams and Cy Young-caliber starters when Atlanta's Mike Soroka squares off with Washington's Max Scherzer. Who's your pick?

Matz: Soroka has been filthy away from Turner Field (1.44 ERA), but the Nationals kinda have his number: In 21 innings, they've gone yard five times against the rookie, accounting for nearly half the homers that Soroka has allowed this season. Yes, Washington's offense has gone cold lately, but they're due to bust out. Plus, Scherzer finally seems to be approaching his old self again. Nationals 7, Braves 5 (with three of those runs coming against the Nats' bullpen).

Edwards: Who will reach superteam status in 2020?

Miller: You know, the Braves would probably be better off skipping Soroka. There's a decent chance they'll need him to face the Nationals in the postseason, and greater familiarity generally only helps the hitters. The Nationals still need to keep winning games, but the Braves can coast a little, and pushing Soroka back three games -- he already has set a career high in innings -- would be a useful little coast. And Scherzer's my pick, anyway.

Schoenfield: Scherzer allowed one run against the Braves in his outing last Sunday. I'm expecting more of the same. He can smell the Cy Young Award and needs a couple of dominant starts down the stretch. He'll get them.

In case you hadn't heard, there have been a lot of home runs this season. What team will hit the most homers this weekend?

Miller: The A's had their best slugging month of the year in August, and are slugging even higher in September. They'll be in Texas, the weather will be hot, the ball will be flying and a playoff spot will be on the line. They're reaching double digits this weekend.