SIX GAMES? Shane Greene thinks for a moment before nodding. Yeah, that sounds about right: After six games in a Braves uniform, he'd seen all he needed to see. Over those six games, Greene watched in silent awe from a bullpen bench in Cincinnati and Minneapolis and Miami as 21-year-old Ronald Acuna Jr. played the game in a way Greene couldn't believe was possible. When Acuna wasn't hitting homers, he was leaping fences to rob them. When he wasn't stealing bases, he was using his arm to deny them. The results were one thing; the style was another. Acuna plays a burdensome game -- The Game of Failure™, according to every baseball guy ever -- with a lightness that borders on mirth. Greene kept sneaking looks at the teammates sitting around him. They were mostly unmoved. What Greene considered astonishing, the rest of them -- those who had seen it all and more -- viewed with knowing indifference.

Greene was the new guy, and part of being the new guy meant "keeping my mouth shut and observing," he says. So he observed Acuna in a way that became more granular with each day. He marveled at the way Acuna stands in the batter's box, holding his hands out in front of his body like a dare, bat perpendicular to the ground as if he's unsure about the point of the whole enterprise. The languid approach seems designed to convince the pitcher he might be able to get it past him before he notices it's been thrown.

Everything you need for October

As 10 teams start the quest for World Series glory, we have inside intel, odds for every series and names to know to get set for the postseason. MLB playoff preview

"And then," Greene says, "here come maybe the fastest hands I've ever seen."

He watched Acuna steal bases and hit homers at a rate that could have made him just the fifth -- and youngest -- 40-40 player in history if a groin injury hadn't ended his regular season with six games to go. He led the National League in runs scored (127) and stolen bases (37). He hit 41 homers. He is expected to play in the National League Division Series against the Cardinals, and there's no way to overstate his importance to the Braves' October chances.

At some point during that sixth game, after Acuna had done something Greene can't remember -- "There's no telling, really; it could have been anything" -- Greene discovered that six games was as long as he could hold it in. The statute of limitations on keeping his mouth shut and his eyes open had expired, and so he just sat there in the bullpen and blurted it out:

"That's the best player who's ever lived."

To Greene, it seemed obvious. He'd never seen anything like Acuna -- "a freak player, a once-in-a-lifetime player" -- and every time he looked at him, one fact kept running through his head like a news crawl: He's 21 years old. Granted, Greene doesn't watch baseball unless he's playing it, and yes, he's not only aware of Mike Trout but has a record (two homers allowed in three official Trout at-bats) to prove it. But he's not some wide-eyed fan; he's been in the big leagues for six seasons, and his eyes told him he was seeing something his brain could barely imagine.

The boys in the bullpen laughed. Not a mocking laugh; more of an easy there, new guy kind of laugh. Everybody laughed but Greene, who cocked his head a bit and refused to retract his proclamation. And then the next night Acuna hit another homer, and the boys in the bullpen looked at Greene and said, "Best ever." And it was still a bit of a joke, to be honest, but the next night Acuna hit two homers among his three hits and by then best ever had become A Thing. Each time, Greene nodded at his bullpen mates with a prove-me-wrong look and the chorus started again:

Delivered with a nod, though, and not a laugh.

Over time, with each passing homer or throw or over-the-wall catch, the refrain began to sound less sarcastic and more reverent.

"At first we thought it was kind of funny," reliever Jerry Blevins says. "As time wore on, though, we were like, 'Well, yeah -- Shane's probably right.'"

THREE HOURS, 58 MINUTES before a mid-September game in Philadelphia, Acuna sits at his locker, wearing his glove, examining it from all angles, tightening a few strings here and there, occasionally smacking his right hand into the sweet spot. The news here isn't so much what Acuna is doing but where and when: out in the open and during the one-hour window the media are allowed in the clubhouse.

There are unwritten rules scattered all over baseball, including in the clubhouse, where the best players usually disappear once the doors open to the media. It's not always personal; if you're a star-level player, your presence at your locker engenders excitement in people who want to stick a microphone in your face and ask you non-questions that are intended to simply make you talk. You are told to talk about in a way that can make you feel like a pull-string doll.

But Acuna, among the handful of best players in the game currently and perhaps historically, sits at his locker, unbothered, confident that no one in the room will ask him to talk about anything since none of them -- present company included, sadly -- can talk about anything of substance in his language.

"A superstar, just sitting there by himself," a Braves PR guy says. "It's kind of crazy."

The best approach, to steal from Greene, is to shut up and observe.

THERE IS A moment in every game in which Acuna announces himself. Three hours, 58 minutes after he sat at his locker examining his glove, he led off the game against Phillies left-hander Drew Smyly and reached on an error, then stole second and third. An Ozzie Albies ground ball later, the Braves were up 1-0.

In the sixth, with his team down 5-4, he ranged from his spot in center field to the wall in right-center and leaped to steal an extra-base hit from Jose Pirela. An inning later, he stood at the plate and watched a Blake Parker curveball parachute its way toward the plate, appearing wholly uninterested in the first 40 feet of the pitch. But then the swing started, originating several strata below the batter's box and rumbling upward. The hands -- the hands Acuna describes only as "something some people have and some do not" -- send the bat to the ball and the bat sends the ball more than 400 feet, over the center-field fence.

"That swing? That swing is not typical," says reliever Mark Melancon. "The optics are different. You have a lot of guys who can hit a deep home run, but the way he does it -- so quick, so late. He waits beyond what you think could be possible before he swings, and it looks like the bat is a toothpick."

Melancon looks off into the distance and shakes his head. "I mean -- he's 21," he says. "I have to keep reminding myself of that. I don't think I've ever played with a 21-year-old before."

Acuna's age is evident only in his face: rounded and boyish, the slightly chubby cheeks at odds with the rest of him. He smiles a lot and plays with a joy that can be interpreted and misinterpreted in all the traditional ways: showboating, cockiness, immaturity. He's been criticized for slow home run trots, for being overly pleased with himself after fantastic catches, even for wearing too much jewelry. In the occasional bout of accuracy, his style has been attributed to its primary source: the simple joy of a 21-year-old playing a difficult game exceedingly well.

"As a little kid, ever since I told my parents I want to play baseball, I feel like I've had a joy for the game," Acuna says through an interpreter. "Everyone has their own style of living, and to each his own. The way I play, I go out there to enjoy myself and I do it with the utmost respect, not meaning to offend or disrespect anyone on the other team. I do it out of love for the game."

The three of us -- Acuna, Franco the interpreter, me -- are standing in the middle of the visitors locker room on a Saturday afternoon at Nationals Park. Players filter past, excusing themselves as we succeed in conducting an interview in the most awkward way possible. I ask Acuna if he'd heard that Greene had proclaimed him best ever, and as the words are relayed to him he laughs sheepishly and says, "Comments like that motivate me to work harder and stay humble. I wouldn't say I'm the best, but I practice and train to be the best."

The Braves, who won 97 games and their second straight NL East title, are a fascinating mix. There's 22-year-old Albies, who led the NL in hits and doubles and plays with the same theatrical flair as his closest friend on the team, Acuna, snatching popups out of the air as if their very existence disgusts him. There's 22-year-old starting pitcher Mike Soroka, who had a 1.09 WHIP, led the NL in fewest homers allowed per nine innings and led all big league pitchers with a 1.35 ERA on the road. Josh Donaldson, gray edging in at the temples, hit 37 homers at 33. Left fielder Nick Markakis is 35, as is catcher Brian McCann. Are they too young, too old or just right?

"The theme here? Go out there, be yourself and play baseball," infielder Charlie Culberson says. "If you start trying to change who people are as individuals, you can change who you are as a team." 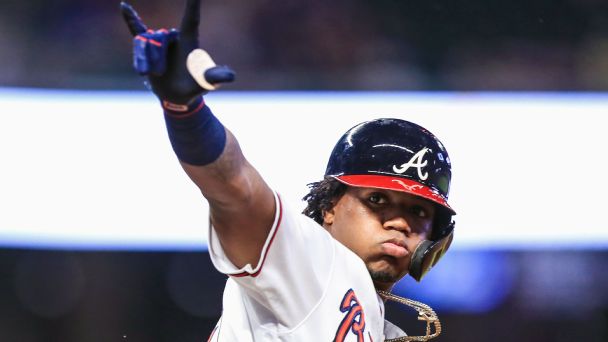 Think Acuna's teammates are crazy for calling him No. 1 in MLB? Check out who's at the top of Eric Karabell's top 300 fantasy players for 2020. Way-too-early 2020 rankings

In a locker across the room from Acuna, sandwiched between understated superstar Freddie Freeman and Donaldson, is McCann. For much of the past decade, McCann has earned a reputation as the man who regulates fun on the baseball field. He was there when Carlos Gomez got a little too much enjoyment out of pimping a slow jog around the bases. He was there when Jose Fernandez held his home run pose a beat too long. As a result, his angry visage has been photoshopped into every possible sports celebration since the invention of photography.

To be fair: McCann hasn't done it for a while. (Acuna was 15 when McCann and Gomez had their moment.) Age and the game's evolution seem to have eroded some of the granite from his jaw. He is soft-spoken -- almost shy -- and effusive in his praise of Acuna.

"He loves the game and loves to have fun," McCann says. "You can see that; he's a fun guy, and he does all the right things. I'm a big fan of his."

"Has Acuna changed your attitude?"

He looks up and smiles. The line of questioning has failed. He shrugs, and his eyes say: Live and let live.

PRESIDING OVER ALL this young talent and veteran wisdom is manager Brian Snitker, a 63-year-old baseball man who looks like a hard-line high school PE teacher and football coach. Snitker is plainspoken and free of pretense. After games on the road, he stands in his office against a white cinder block wall that's been adorned with a plastic Braves logo tarp. He takes off his cap for the interviews, presumably because he is inside and that's the polite thing to do, exposing a bald head and an equatorial forehead dent like a flood line on the wall of a building. Cameras press in, and the lights bear down. He looks as if he should be holding up a newspaper displaying the day's date.