WASHINGTON -- The between-pitch routine that is now known simply as "The Soto Shuffle" began when Juan Soto was young -- exceedingly young -- and in the minor leagues. It developed into a tic but began as a mindset, a tenet, about taking ownership of at-bats and, more so, approaching life with unwavering confidence. The ritual followed him to the majors, where Soto finished his teenage years, its theatrics growing increasingly more aggressive as the months passed and the success persisted.

Then Anibal Sanchez saw it.

It was July 20, 2018, during their second confrontation. Sanchez was pitching for the Atlanta Braves, midway through his 13th season. Soto was 19 years old and two months into his big league career. Sometimes he would take a pitch and aggressively tug at his crotch. Other times he would squat really low, lunge forward, stare directly into Sanchez's eyes and grin.

"I'm like, 'What's going on over here?'" Sanchez said. "I thought this guy was going to fight with me."

It continued through Soto's first two plate appearances. Sanchez would giggle, causing Soto to crack a smile and break character. On nights when he wasn't pitching, Sanchez began imitating Soto's routine from the opposing dugout, egging him on. Soto grew to love it.

The following year, Sanchez joined Soto on the Washington Nationals and began to view the histrionics differently. He saw a young man with distinct poise who took on a fighter's mentality in the batter's box. The routine, Sanchez learned, was merely an extension of Soto's identity.

"It's good," Sanchez said, "especially when you have him on your team."

The Soto Shuffle will be on display on baseball's grandest stage this week, when the Nationals -- fresh off a convincing sweep of the St. Louis Cardinals in the National League Championship Series -- face the Houston Astros in their first World Series.

Fans throughout the country have become equal parts captivated, enraged and excited by the flamboyance of Soto's routine. He'll swing his hips or spread his legs or sweep his feet or shimmy his shoulders or lick his lips or squeeze his, um, junk, sometimes all at once. Soto has stated that it's a mechanism to synchronize his timing, but he also admitted to an ulterior motive.

"I like to get in the minds of the pitchers," Soto said earlier this postseason, "because sometimes they get scared."

Soto's father, Juan Sr., was watching from the Dominican Republic when Cardinals starter Miles Mikolas got Soto to bounce into an inning-ending groundout in Game 1, waited for him to turn his head and grabbed his own crotch in retaliation. The incident, dismissed as playful banter by Mikolas, seemed to symbolize the sport's ongoing culture war. But Juan Sr. just laughed. The antics, he explained, are the manifestation of a mindset ingrained in Soto as a child.

"It's like I always told him -- when you get into the batter's box to hit, you own that space," Juan Sr., speaking in Spanish, said in a phone conversation. "Nobody can intimidate you. On the contrary, those guys [the pitchers] are the ones who should be afraid of you. And you have to show them why."

When Soto was only a few months old, his father was already taking him to Estadio Quisqueya, home to the Licey Tigers and the most intense, pressure-packed baseball on the island. Juan Sr. would bring a bottle and a blanket, and the two would take in the atmosphere together. Baseball was at the core of Soto's life from then on. He was always too young and too good for the league he played in. Through the years, his father often repeated the same phrase: "You're going to be a big leaguer."

Inside the greatest night in Nats history 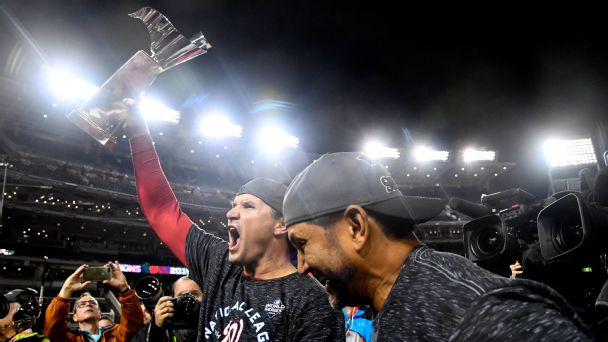 Washington is finally going to the World Series. Here's how original Nat Ryan Zimmerman and all of D.C. soaked in the celebration. Alden Gonzalez

The Nationals signed Soto for $1.5 million in July 2015, a franchise record on the international market. Injuries limited him to 83 games through his first two seasons of professional baseball, so he used the downtime to become a fluent English speaker. After the 2017 season, he returned home to Santo Domingo and trained with purpose, then zipped through the Nationals' minor league system the following spring, graduating from both Class A levels in five weeks.

Soto arrived at the Nationals' Double-A affiliate in Harrisburg, Pennsylvania, on May 10. The clubhouse was overrun, and one of the catchers was forced to share half his locker with Soto.

Nine days later, Nationals president of baseball operations Mike Rizzo sat in Dave Martinez's office after his postgame media session. Martinez, then in his second month as a major league manager, lamented the injuries that were beginning to pile up, the latest a torn Achilles tendon suffered by Howie Kendrick.

"We're bringing up Soto," Rizzo repeated. "He's gonna have to learn to play sooner or later."

Soto homered in the first at-bat of his first start and batted .346 through the first 16 games of his rookie season. By the end of it, he owned a .292/.406/.517 slash line with 22 home runs in 494 plate appearances, setting a record for weighted runs above average among teenagers. Martinez was awed by Soto's plate discipline and poise, but was also impressed by his diligence.

From the wild-card game through the World Series, we've got it all covered. Complete coverage

Soto's second-year numbers -- .282/.401/.548 with 34 homers in 659 plate appearances this season -- only improved. When the postseason began, he held the record for most walks before age 21 and trailed only Mel Ott for the most home runs. Then came the game-winning hit off Josh Hader in the eighth inning of the NL wild-card game, and the game-tying home run off Clayton Kershaw on the decisive night of the NL Division Series.

Soto expanded his strike zone often in the minor leagues and was told to hone in on one pitch, in one location, until he got into two-strike counts. Soto has adopted that mindset in the major leagues, a strategy that works only when hitters possess a firm grasp of opponents' tendencies. Nationals starter Max Scherzer has taken note of the way Soto interprets data, a rarity for his age.

Soto accumulated one hit and seven strikeouts through his first 12 at-bats in the NLCS. The Cardinals attacked him mostly with breaking balls out of the strike zone, and Martinez noticed Soto trying too aggressively to pull pitches. The night before Game 4, Soto was in the batting cage with hitting coach Kevin Long until midnight, working on seeing the ball deep and hitting it to the opposite field. Hours later, in an eventual pennant-clinching 7-4 victory on Tuesday night, Soto put together four impressive plate appearances -- lining a double down the left-field line, flying out to the left-field warning track, smoking a 107 mph line drive to center field and singling sharply through the right side.

They annoyed Mikolas in Game 1 and seemed to irritate Jack Flaherty in Game 3, but they were nonexistent in Games 2 and 4. The between-pitch routine, Soto said, "fuels my confidence." But he has learned to pick his spots with it. The tighter the situation, the more likely it is to make an appearance.