I was born and raised in Bethesda, Maryland, and attended Walter Johnson High School, named after the greatest pitcher of all time. I wrote for the school newspaper, The Pitch, and I did some work for the yearbook, The Windup. It was a privilege and a thrill to wear a baseball and basketball uniform with Walter Johnson written on it. But for some reason, we were the Spartans, not the Big Train, which was the nickname given to Walter Johnson in 1911 by one of the greatest sportswriters ever -- Grantland Rice.

When I tell people about my high school, I often get quizzical looks, as if there's no way a school could be named after a baseball player. But Walter Johnson was much more than that, on and off the field. He won 417 games, had a 2.17 ERA and registered a record 110 shutouts, a record 38 of them by a 1-0 score. He held the career strikeout record for 55 years and hit 41 triples -- 18 more than any other pitcher in history. The son of a Kansas farmer, he was working for the telephone company when he was discovered pitching in the Idaho State League in 1907. He was bigger and stronger and threw harder than most any other pitcher of his time.

The 2019 World Series between the Nationals and Astros is, for me, the Small World Series. I have a personal connection to this one unlike the previous 38 World Series I have covered because it involves my hometown and a team, once removed, that I adored as a kid. I am not rooting for the Nationals. I am, as always, rooting only for the story. This is the story of a great but tormented city, a mostly terrible baseball team, the best pitcher ever and a dinky little kid who's now a dinky little 62-year-old who loves the game more than ever.

The only year the Senators won the World Series was 1924. Walter Johnson, who had gone 23-7 that season at age 36, had lost Games 1 and 5 of the World Series to the Giants. But he pitched four scoreless innings in relief to close out Game 7 and win the Series.

There hasn't been much baseball to celebrate in Washington since then. From 1934 through 1960, the Senators had two winning seasons, birthing the famous saying: "Washington: First in War, First in Peace, Last in the American League." The Senators were so bad that owner Calvin Griffith moved the team to Minneapolis-St. Paul after the 1960 season. Washington was immediately awarded an expansion franchise in 1961. That team had only one winning season over the next 11 years.

But the 1969 season was glorious for any fan of the Senators. RFK Stadium hosted the All-Star Game. The Senators miraculously won 86 games. Frank Howard hit monstrous home runs. My favorite player, Eddie Brinkman, was a terrific defensive shortstop. And my oldest brother, Andy, served as a ball boy on occasion for the Senators because our family was close to the Baxter family; Fred Baxter was the team's equipment manager.

The manager of the Senators from 1969 to 1971 was Ted Williams, my father's baseball hero. Williams taught Brinkman how to hit: His average went from .187 to .266 in the first year with Williams. Ted Williams didn't love managing; he loved hitting. One spring, his coaches were arguing about the proper way to conduct a rundown. They went to Williams to settle it. He listened to both sides, then called off the drill, saying with disgust, "Aw, f--- it, let's hit!"

After a terrible 1970 season, Senators owner Bob Short traded Brinkman, third baseman Aurelio Rodriguez, and pitchers Joe Coleman and Jim Hannan for the Tigers' Denny McLain, who had won the AL Cy Young in 1968 and 1969. McLain would later say, "I was traded to hell." We would pass McLain's house in the Drumaldry neighborhood every day on our way to North Bethesda Junior High School. McLain went 55-15 in 1968 and '69. For the Senators in 1971, he went 10-22. The team was terrible. Short moved it to Arlington, Texas, after the 1971 season.

Washington had lost a team for the second time in 11 years. I was 14. I cried.

And yet, 10 years later, I was covering the Texas Rangers, formerly the Senators, for The Dallas Morning News. On my first day of spring training 1982 in Pompano Beach, Fla., I looked at a map of the area. In the right corner was a picture of a ballpark. It read: Municipal Stadium, Spring Home of the Washington Senators. I laughed.

My job as a baseball writer brought back my childhood, in a way. I had lunch with Eddie Brinkman. I had beers with Frank Howard. At the winter meetings one year, the security guard at the door of the press room was Paul Casanova, who was a catcher for the Senators 35 years earlier. He was shocked that anyone would recognize him. We talked about the old days for an hour. I interviewed Williams in 1999, and among other things, he told me how much he enjoyed his days in Washington but said, "We had some bad teams."

'The sound of fear' 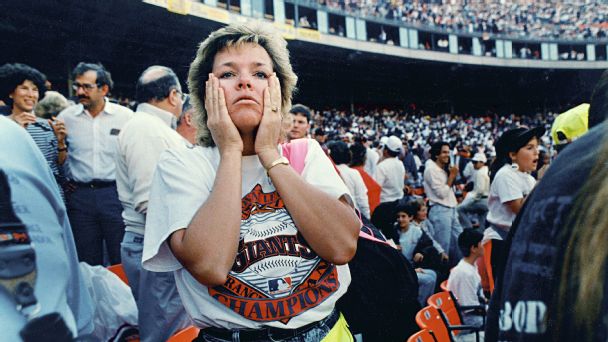 Thirty years ago, the Loma Prieta quake shook the Series -- and the world. Tim Kurkjian »

I befriended Shirley Povich, one of the greatest baseball writers of all time, one of my heroes in journalism. He covered Walter Johnson. The University of Maryland, which I attended, is home to the Shirley Povich Center for Sports Journalism, which I take an active role in supporting any way I can. There is a baseball field in Bethesda named Shirley Povich Field; I played most of my games there as a kid. The team that plays there now is part of the Cal Ripken Collegiate Baseball League. Fittingly, it is called the Big Train.

Shirley died in 1998, seven years before the Expos moved to Washington, ending 34 years without baseball in the nation's capital. The return of the Nationals has been great for the city, and they have been largely successful, making the playoffs five times, albeit with three excruciating Game 5 losses along the way. But here they are in the World Series, looking like a team of destiny with the way they have won in this postseason.

And they are playing the Astros, who provide another connection to Washington baseball -- and to me. Third baseman Alex Bregman, an MVP candidate, is the grandson of Stan Bregman, who served as general counsel for the Senators from the late '60s until the team moved to Texas.

"I grew up to stories of Ted Williams," Alex said.

As I did, with my father.

Bregman's father, Sam, and his uncle, Benny, also went to Walter Johnson High School. Sam and I have talked several times about our high school, his son and the bond that we share. My cousin Bill makes sure to visit Sam when he comes to town.

Sam didn't work for The Pitch or The Windup. His birthday isn't the same as the death date of Walter Johnson, the greatest player ever to play in Washington. But Sam will be there for the World Series. It will be extra special for him and Alex.