Using technology to steal signs is an ancient weapon in baseball, going back at least to the 1951 New York Giants, who used an elaborate buzzer system at the Polo Grounds to relay the catcher's signs during that famous pennant race that ended with Bobby Thomson's home run.

Players rarely fess up to such activity -- it took Giants players 50 years before they admitted to stealing signs, although there had been rumors for decades -- so Mike Fiers' statement that the Houston Astros deployed a center-field camera during the 2017 championship season to help steal signs is a relative bombshell. Fiers, now with the Oakland Athletics, was a member of the Astros in 2017.

What is sign-stealing, and how does it help?

Sign-stealing is the act of decoding an opponent's signs -- usually the catcher signaling which pitch to throw. Old-school sign-stealing would involve a runner on second base trying to figure out the signs and relaying the pitch to the batter to gain the tactical advantage, usually by some set of hand signals, such as touching your helmet for a fastball or not touching it for a breaking ball. This is aspect of sign-stealing is a long baseball tradition and treated as "part of the game," although it is sometimes viewed as a breach of etiquette.

Technology, however, makes sign-stealing even easier, as you can use cameras to help. This is not a recent development. Opponents accused Bobby Valentine of using a camera when he managed the Mets in 1997. (The Mets admitted the cameras were used to tape opposing managers and coaches.) Red Sox manager Jimy Williams accused the Indians of doing it in 1999. Two years ago, the Red Sox were caught stealing signs with the aid of cameras and Apple watches. A team video replay member would pick up the catcher's signs from a video feed, determine the sequencing when a runner was on second base, and relay that information to the team trainer, who was wearing the watch. The trainer could then alert a player in the dugout or signal to the runner on second, who would then relay the pitch to the batter.

Is stealing signs against the rules?

The old-fashioned way is not against the rules. Before the 2019 season, in the wake of the Red Sox incident from 2017 and accusations from the 2018 playoffs, when the Indians and Red Sox both discovered an unofficial employee of the Astros pointing a cellphone camera toward the Cleveland and Boston dugouts, MLB instituted new guidelines in 2019 regarding electronic sign-stealing. (The Astros claimed the employee in 2018 was deployed in a preventative measure, although general manager Jeff Luhnow admitted "it made us look guilty.")

The guidelines in the six-page document created rules concerning placement and usage of center-field cameras, plus TVs and monitors, and mandated screens be on an eight-second delay. MLB also placed league employees at stadiums to monitor activity.

How prevalent is sign-stealing?

As then-Yankees manager Joe Girardi said after the 2017 incident with the Red Sox, the Yankees just assume everyone is doing it. In recent years, there were accusations levied against the Blue Jays and their legendary "man in white" in center field. In the American League Championship Series between the Royals and Blue Jays, Edinson Volquez said teammate Johnny Cueto told him the Jays had been stealing signs in Game 3. "He said, 'They got a guy in center field.'" Cueto never played for the Blue Jays.

How were the Astros stealing signs?

Fiers said the Astros had a camera set up in center field with a feed sent to a television monitor in the tunnel next to the Astros' dugout. Astros players and team employees could watch the live feed and would relay the pitch by banging loudly on a garbage can in the tunnel.

Fiers told The Athletic that after becoming a free agent following the 2017 season, he told his teammates on the Tigers and then the A's what was going on. "I had to let my team know so that we were prepared when we went to go play them at Minute Maid," he said. The Athletic had other team sources confirm that the sign-stealing practice existed.

Did it help the Astros? 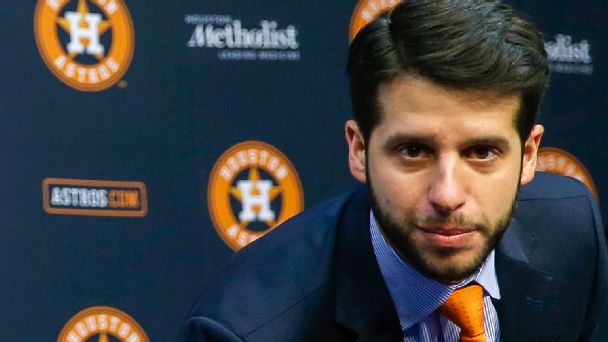 The Houston Astros fired assistant GM Brandon Taubman and admitted his "inappropriate comments" were directed at a group of female reporters. Story »

• MLB to look into claims against Astros exec

Those numbers don't tell the whole story, however. Because the Astros hit much better with runners in scoring position on the road -- .305 versus .281 -- they averaged 6.19 runs per game on the road compared to 4.88 at home.

The Athletic story said the Astros deployed the system when two "uniformed" members of the team started the process, including one hitter who was off to a slow start and had benefited from sign-stealing while playing for another team. This suggests the system was developed at some point after the start of the season. Did the Astros improve at home as the season went on? They did, at least initially. Their month-by-month totals at Minute Maid in 2017:

Of course, those numbers are subject to small sample sizes and quality of opponents. The July numbers included just nine home games, the fewest of any month.

OK, who was the player involved?

We have to be careful here. The Athletic story didn't mention the specific player. But we can look at some of the numbers from that season and just list the facts without making any direct allegations. The Astros had four players that April who didn't play with Houston in 2016, plus Evan Gattis, who had played with the Braves earlier in his career. Their stats through the end of April:

Free agency is underway! These are the storylines you need to know to get through the winter.

Beltran was 40 years old and in his final season. His worst two months were actually August and September. He hit just slightly better at home on the season, .236 with a .690 OPS versus .226 with a .643 OPS.

What is the Astros' response to this latest accusation?

They issued the following statement: "Regarding the story posted by The Athletic earlier today, the Houston Astros organization has begun an investigation in cooperation with Major League Baseball. It would not be appropriate to comment further on this matter at this time."

Will the Astros be punished?

The Red Sox were fined an undisclosed amount in 2017, with commissioner Rob Manfred issuing a statement at the time that "all 30 clubs have been notified that future violations of this type will be subject to more serious sanctions, including the possible loss of draft picks." Given that accusation occurred before the 2019 crackdown, it's unclear how MLB will handle the matter upon completing its investigation.

Wilbon: Astros stealing signs to me is not a big deal

Michael Wilbon says that while allegations that the Astros stole signs with a camera is a big deal to some people, it's not in his opinion.