The Houston Astros announced Tuesday that they've opened an investigation after former Astro Mike Fiers told The Athletic the team used a camera in center field to steal signs and immediately communicate that information to its hitters, violating baseball rules.

This has overshadowed other breaking news:

• Pete Rose declared that he's going to look into the question of whether he bet on baseball.

• Ryan Braun announced he's investigating why he accused a urine collector of tampering with his sample tainted with performance-enhancing drugs.

• Hunter Strickland has hired detectives to determine how it came to pass that he threw a fastball into the middle of Bryce Harper's body in 2017.

It probably took longer for the Astros to generate the statement about the forthcoming investigation than the actual investigation should require -- that is to say, two phone calls, to ask two questions.

And if Luhnow doesn't know, he can call his video operator and ask: What happened? That's all it should take.

But Luhnow should already know what happened, following the flare-up during the Astros' playoff series against Cleveland in 2018, when Houston stationed a club employee in the camera well next to the Indians' dugout, amid concerns about sign-stealing.

Remember that? Remember what Luhnow said about that?

"We were playing defense, we were not playing offense," Luhnow said about the situation with the Indians. "We wanted to make sure it was a level playing field. ... We look around to make sure there's nothing suspicious going on. We want to make sure our signs aren't getting stolen."

"So we do it every stadium we go into. We dispatch someone from the travel party to go out to center field, look at a particular area that might be suspicious or a certain monitor. I'm sure other clubs do this as well, but we're just trying to protect ourselves the best we can."

'The Astros being the Astros' 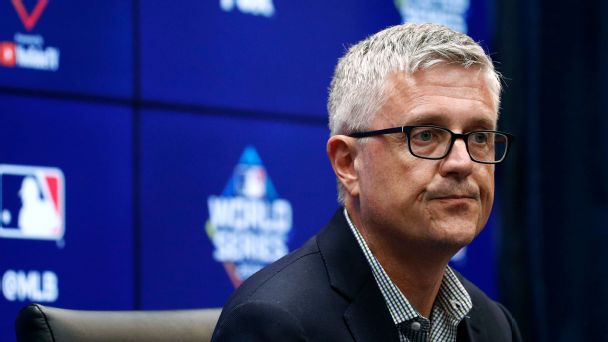 Inside the culture that bred Brandon Taubman's comments toward a group of female reporters. Jeff Passan »

Now that we know what Fiers says, which matches what other teams have long suspected -- that the Astros had a method of using high-volume sounds to alert their hitters about what pitch is being thrown next -- Luhnow's words have a completely different context.

Any plausible deniability is long since gone for Luhnow and the Astros. If he didn't know before MLB's 2018 investigation during the Cleveland series, he should have quickly gotten to the bottom of the issue -- the whole question of whether the Astros were doing something illicit -- a year ago, at the latest.

So Luhnow is either guilty of knowing that his team ignored baseball's rules against the use of technology, or he was guilty of staggeringly lax oversight. In college football, they would refer to this as institutional failure.

Which, at this point, would not be surprising. In the aftermath of the Brandon Taubman incident that eventually cost the Astros' assistant GM his job, Luhnow said of Taubman: "We may never know of [Taubman's] intent. ... What we really don't know is the intent behind the inappropriate comments he made."

Earth to Luhnow: You were his boss. You had the power to ask him his intent.

But with the latest news, MLB and commissioner Rob Manfred look pathetically permissive, in retrospect. The Astros were fined $500,000 for the incident in the Indians series, which is tip money for what is probably a multibillion-dollar company. There were no suspensions, there was no individual discipline meted out, despite all of the information other teams had about the extraordinary noises coming from the Astros' side of the field and the broad and specific concerns other teams harbored.

Free agency is underway! These are the storylines you need to know to get through the winter.

Manfred had the opportunity to draw a line on this issue last year by mandating major suspensions for any club personnel found to break baseball's rules about the use of technology in sign-stealing. A one-year ban; a lifetime ban; whatever.

Kenesaw Mountain Landis did this following the Black Sox scandal, throwing down lifetime suspensions for the players involved in fixing the 1919 World Series, and applying baseball's version of capital punishment to that kind of conduct -- a rule posted in every clubhouse, as a means of protecting the integrity of the competition.

But MLB didn't do that last year. And once again, Manfred is standing by and waiting for Luhnow to head an investigation of the Astros.

Good luck with that.