With a significant new MLB rule on the horizon and a cheating scandal looming, we wondered how baseball's managers felt about two of the biggest issues surrounding the game.

We asked managers at the recent winter meetings about the new three-batter-minimum rule and the ongoing sign-stealing saga surrounding the Houston Astros, as well as the best advice they've given or received.

How will the three-batter minimum affect you the most?

Bud Black, Colorado Rockies: "I think the chess game still is going to be in play but ... the endgame decisions are going to be drastically different. You'll see from game No. 1. We're all going to have to learn a different type of strategy."

Joe Girardi, Philadelphia Phillies: "I think it can affect how you put a lineup together. Depending how many left-handers they have, maybe you spread your left-handers out. So if they have a guy that is efficient in getting left-handed hitters out, you surround him with two beasts that are right-handed hitters. So I think it does change."

Baseball voted in a rule change that will reshape bullpen usage. Here's how the three-batter minimum will work and whom it will impact most. FAQ

• End of the lefty specialist? Not so fast
• Rules changes: What you need to know

Chris Woodward, Texas Rangers: "It's different. There's going to be some tricky situations. You bring in a guy with two outs, you're hoping this guy gets out. Guy gets a flare for a hit, next guy is a lefty. OK, I can get through that guy, but the guy after that, significant right-handed hitter. I don't think it's going to affect anything to start our innings, because our bullpen isn't made up of just lefty or righty dominant, which helps us a lot. But for other teams, there are going to be significant advantages, right or left."

Dave Martinez, Washington Nationals: "Yeah, I've been kind of contemplating things in my head: what we want to do and what we want to see and the kind of pitchers we want in our bullpen. We talked a lot about it. We're still not done finalizing things, but we're going to look at a lot of different options."

Joe Maddon, Los Angeles Angels: "I don't like it. I haven't liked it from the beginning. I don't quite get it. My take on the whole thing is -- I'm all for messing with the pace of the game. I think the pace of the game can be messed with; I'm good. The thing I would never interfere with is strategy, and to me, that interferes with strategy, and that's the part I don't like. Pace and length of the game, I think, are interconnected, but strategy is sacred, I think."

Ron Gardenhire, Detroit Tigers: "Can we talk about that after a few cocktails? There was a lot of conversation about that three-batters rule. We've got a lot of managers still trying to figure out how it's going to work out. It's not one of those favorite things for a manager because it starts taking away a little bit of strategy. I know the game is tough when you walk out there and change a pitcher for every hitter; but at times, it's about trying to win a ballgame, and I think that's what we're all here for. Those are the arguments. But we're trying to improve the game, so we've got to give it a look before day one." 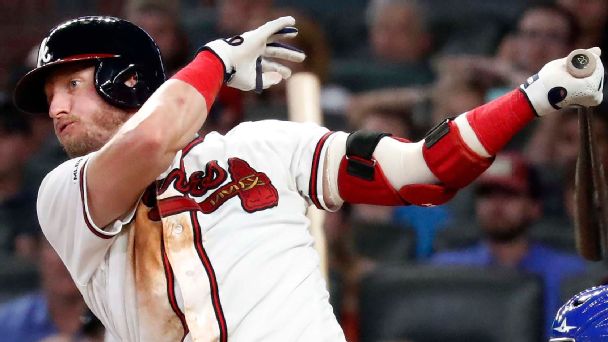 Which free agents are still out there now that this winter's big three have signed? Here are our rankings and predictions for the best remaining players. David Schoenfield

Brian Snitker, Atlanta Braves: "I think it will become our new norm. There's something that you're always adjusting to in this game. It's players, the staff, the managers, the front office -- we're all making adjustments all the time in this game, trying to stay ahead."

Derek Shelton, Pittsburgh Pirates: "I don't know because I haven't done it the other way. The three-batter thing will be interesting, and it's going to be interesting for a couple of reasons for me. Never having managed in the National League, it will be interesting to see how that works out with the pitcher."

Girardi: "I worry about people possibly using their better relievers too much because there's youth in bullpens and guys that aren't ready for the eighth and ninth inning -- and sometimes you may want to use them to give those eighth- and ninth-inning guys a day off, and that's a concern of mine."

What's your take on the Astros sign-stealing situation?

Gardenhire: "It's always been part of the game, trying to pick up the catcher signs and stuff. That part has always been fine. When you get into the other stuff, that's when it gets out there. I think that's what everybody is trying to stop. Everybody is going to continue to look and see if you can get a catcher's routine and signs, but the other part of it we've got to get rid of. That's a little bit unfair, and I think baseball is taking care of it. That's what we've been told, and I believe them."

Snitker: "Guys have been trying to figure out an edge for as long as we've been playing. Whether it's guys tipping pitches, they study it. Some guys are better at it than others and getting advantages. I've never really spent a lot of time with it. I mean, I think a lot of it -- you know, it's been going on for a long time, the on-the-field type things.

Kevin Cash, Tampa Bay Rays: "I can't speak on anything other than what took place in the playoffs. I thought MLB did a tremendous job of monitoring everything. There were MLB supervisors, officials, two at one end of the dugout, two at the other end, one or two in the video rooms. I fully trust MLB did a really good job."

Bob Melvin, Oakland Athletics: "Yeah, we talked about it, prepared for those type of things. There was a lot bantered about, those type of things going on. It is what it is. There is an investigation going on, and at some point in time there will be ramifications for it. If what has been going on and what we're reading about is going on, that's a line that's been crossed."

Woodward: "I think we're all paranoid. I just know that I challenged all the teams that I was on. I came up in an era where the team I played on in Toronto, we were aware of signs and tips on pitchers, and we tried to find every advantage we could -- obviously without crossing that line into the cheating realm. But anything you can take advantage of, you do."

Maddon: "When you use electronic cheating, that's not good. It's almost tantamount to steroids in regards to an imbalanced playing field. If we could level that out and eradicate that and you get guys going out there naked every night just based on their own abilities, I'll take it. I'll take us against anybody under those circumstances."