Mike Trout has been baseball's best player for nearly a decade and still has not won a postseason game. We know this, and yet the mere mention of it always seems to make our heads spin. Such a thing is actually a very rare circumstance, even within a sport that so greatly diminishes the impact of an individual.

Consider: Trout, still only 28 years old, has averaged nine Baseball-Reference wins above replacement per season since his rookie year in 2012, putting him on track for 81.5 WAR by the end of the 2020 regular season. Only 58 players have ever reached those heights, and only seven of them accumulated that much WAR before experiencing their first postseason victory. Four of them -- Walter Johnson, Rogers Hornsby, Cy Young and Nap Lajoie -- retired before World War II. The others -- Robin Roberts, Ferguson Jenkins and Phil Niekro -- were done before the 1990s.

Since then, Major League Baseball has added two divisions and four wild-card spots, creating an era when a third of the league's teams makes the playoffs each year. In some ways, it has never been easier to reach the postseason. And yet Trout, on a track that could someday make him the greatest player in baseball history, has gone eight years without putting his imprint on October.

The easy answer is that the Angels -- the franchise that made him a first-round pick, then signed him to two nine-figure extensions -- have failed Trout. But it's not that simple. Flawed as their process might have been, they've tried. They signed star free agents, pulled off in-season trades for impact players, chased veteran pitchers and basically avoided a necessary rebuild in hopes of maximizing Trout's prime -- only to potentially waste it further in the process. 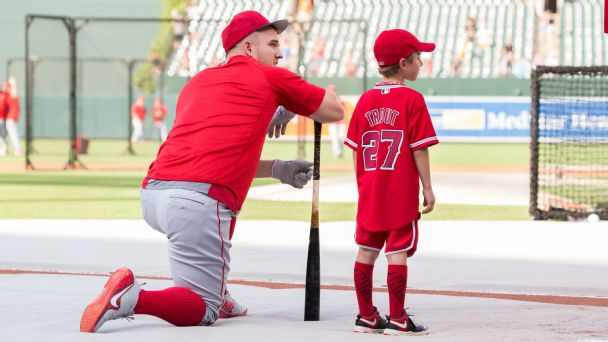 Remember the Angels superstar bringing a young kid dressed just like him onto the field last summer? The connection goes much deeper than that. Jeff Passan

The Angels lost 90 games last season, then brought back the decorated Joe Maddon to be their new manager and splurged on a star third baseman in Anthony Rendon. They hope this is the year they finally reward Trout for his loyalty; the punishment levied against the division-rival Houston Astros for their sign-stealing methods should only help. But to even get to this point -- to not do any meaningful winning around a player who makes you no worse than mediocre all by himself -- is an outright travesty.

Below are 10 reasons why it has happened.

You should have seen Albert Pujols in his first spring training with the Angels. He was spry and light on his feet, lining pitches all over the field and looking very much like the greatest hitter on the planet. Then the regular season began, and Pujols went on a mystifying 27-game homerless drought. He recovered well enough to contribute solid numbers in 2012. But then plantar fasciitis ruined his 2013 season, and the player who emerged from that no longer resembled the titanic slugger from St. Louis. Pujols' prime was gone -- just like that. From the start of June to the end of August in 2012, Trout and Pujols combined to bat .336/.402/.617 with 41 home runs and 121 RBIs. It was the only period when their greatness truly intersected.

Most of the talk heading into the 2012 season centered on Pujols, but the Angels' starting rotation seemed particularly formidable. C.J. Wilson, another coveted free agent, was added to a staff that already featured one of the game's best rotation duos in Jered Weaver and Dan Haren. But Haren fell off precipitously in 2012. A back injury he suffered the previous summer materialized again during spring training and plagued him throughout the season, limiting Haren's ability to finish pitches in the bottom of the strike zone as his ERA rose to 4.33. That led the Angels to trade for two months' worth of Zack Greinke in July, which cost them a talented infield prospect named Jean Segura. And it helped keep a talented team out of the playoffs.

On Dec. 12, 2012, the Angels introduced four new pitchers -- Joe Blanton, Tommy Hanson, Ryan Madson and Sean Burnett -- at the ESPN Zone at Downtown Disney in Anaheim. Their offseason work was presumably finished. But later that night, while the team hosted its annual holiday party at the same venue, players in attendance were made aware of the shocking news that would leak the following morning -- Josh Hamilton was joining the team, by virtue of a five-year, $125 million contract.

It was a setup for disaster from the outset.

Hamilton arrived at his first spring training with the Angels significantly lighter and ultimately lost a lot of his prodigious power. Years 1 and 2 included a .255 batting average and 31 home runs in 240 games. Year 3 was flat-out bizarre. Hamilton's cocaine and alcohol use resurfaced over the offseason, and the front office quickly distanced itself from him. When MLB decided not to suspend Hamilton, the Angels expressed public anger. They ultimately sent him back to the Texas Rangers -- and agreed to eat most of the remaining $83 million on his contract. It set the franchise back years. 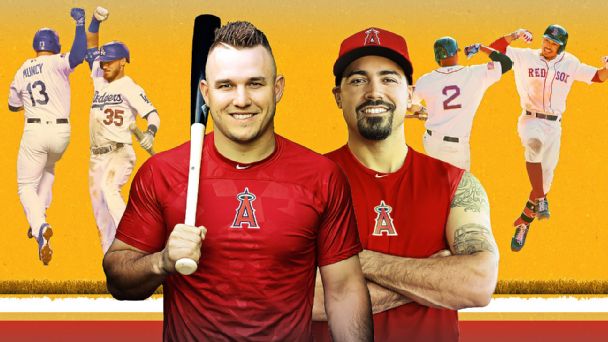 As two superstars join forces in Los Angeles, we rank the most dynamic duos in baseball. Bradford Doolittle (ESPN+)

The Angels were the best team in baseball when the postseason began in 2014. They won a major league-best 98 games, cruising to the American League West title with relative ease. Then they ran into a Kansas City Royals team that played amazing defense, and right fielder Norichika Aoki stole Game 1 of the division series with two circus catches. To end the sixth inning, Aoki extended his right arm while backing up Lorenzo Cain in the gap and found Howie Kendrick's fly ball in his glove. To end the seventh, he dove on the warning track to make up for a bad route on C.J. Cron's drive and somehow made the catch. Both plays came with two outs, a runner in scoring position and the game tied. The Angels lost that game in 11 innings, then lost Game 2 in 11 innings. They were routed in Game 3, and that was it -- Trout's best chance at a postseason victory was over.

When the month began, the Angels were suddenly without a general manager. Jerry Dipoto resigned in the wake of a testy meeting with the coaching staff, the final straw in what had evolved into a contentious relationship with longtime manager Mike Scioscia. The Angels were four games out of first place and in the thick of the wild-card race at the time, and Dipoto's departure precipitated a run of 13 wins in a span of 15 games. But the moves made to bolster the roster ahead of the July 31 trade deadline -- adding outfielders Shane Victorino, David DeJesus and David Murphy -- were ineffective. The Angels faded toward the end of another unfulfilling summer.

Jered Weaver's fastball averaged 90 mph for the last time in 2011. For the next three years, he pitched around 88 but still managed to win 49 games, compile 556⅓ innings and post a 3.24 ERA. His determination and know-how, not to mention the deception in his delivery, allowed him to remain among the game's best pitchers despite lacking an overpowering pitch. But by 2015, in his age-32 season, Weaver's fastball plunged to 84 mph. And there was no recovering from that. Weaver's days as a legitimate force at the top of the rotation -- or, to some extent, as a serviceable member near the middle of it -- ended abruptly. The Angels still haven't found a worthy replacement.

The rotation -- or lack thereof

All of Fenway Park fell abruptly silent on the night of Aug. 20, 2014. Garrett Richards, the electric young right-hander in the midst of a breakthrough season, lay on the ground writhing in pain, clutching his left knee upon suffering a torn patellar tendon. It foreshadowed what became a dizzying number of injuries for Angels starting pitchers.

Over the next five years, Richards, Andrew Heaney, Tyler Skaggs, Nick Tropeano and Shohei Ohtani all needed Tommy John surgery, while Matt Shoemaker dealt with a mysterious nerve issue that limited him to one start over the course of 15 months. From 2015 to 2018, 32 pitchers made starts for the Angels. And on the first day of July in 2019, Skaggs was found dead in his hotel room at the age of 27, just as he was coming into his own as a major leaguer. The organization is still coping with the aftereffects.

The Angels found themselves in a general malaise for about a three-year stretch, but they suddenly caught the attention of baseball observers throughout the country on Aug. 31, 2017, the deadline for acquiring postseason-eligible players. With their record at 69-65, the Angels traded for outfielder Justin Upton and second baseman Brandon Phillips, who had a combined seven All-Star appearances on their resumes. But then the Angels suddenly faded, winning only 11 of their next 28 games. Another season lost.

Missing out on Corbin

The Angels clearly needed a top-of-the-rotation starter heading into the 2019 season, and GM Billy Eppler made a run at free agent Patrick Corbin, a second-round pick by the team in 2009 who was traded to Arizona a year later. Corbin instead chose to sign a six-year, $140 million contract with the Washington Nationals, sending Eppler to the proverbial bargain bin to try to patch holes in his pitching staff. He wound up spending nearly $30 million on Matt Harvey, Trevor Cahill and Cody Allen, who combined to allow 131 earned runs in 185 innings for a team that went 72-90. Corbin went 14-7 with a 3.25 ERA for the team that won the World Series.

Baseball America had the Angels' farm system ranked as either the worst or the second-worst in baseball at the start of every season from 2013 to 2017. If you're looking for the biggest reason the organization has not fielded enough talent around the game's best player, look no further. You can point to the loss of draft picks as compensation for expensive free agents, or cutting back on international spending in the late 2010s, or failed drafts shortly thereafter -- all are valid reasons why the Angels' once-bountiful minor league system evolved into an industry-wide laughingstock. The effects were felt immensely on the major league level.

An Angels team that doesn't boast the revenue streams of financial behemoths like the New York Yankees and Los Angeles Dodgers badly needed cheap, talented, young players to offset the high salaries on their payroll and consistently struggled to produce them. And because of that, they constantly found themselves having to fill needs on their major league club through the shallow end of the free-agent pool -- historically treacherous waters through which to navigate. Names such as Blanton, Madson, Harvey, Cahill, Raul Ibanez, Matt Joyce, Zack Cozart and Jesse Chavez show that the Angels did not do well in this department.

Trout -- and, indirectly, the entire baseball-loving segment of our population -- has suffered because of it.