WEST PALM BEACH, Fla. -- This being Florida, and Florida being the cradle of American absurdity, the sight of a man peeling off his shirt, walking to a place where he was guaranteed to be noticed, pirouetting to show off the tattoo on his left collarbone, slipping on a new shirt and slinking away, satisfied, mission accomplished, felt entirely appropriate. Actually, that's a lie. What Jose Altuve did Monday morning in front of a group of reporters was spectacular even by Florida's standards. This is the Houston Astros' existence. They have morphed into such a circus, such a far-fetched big top, that they are seeing Florida and telling it to hold their Shiner Bock.

The insertion of ink into this spectacle came Saturday, when Astros shortstop Carlos Correa told MLB Network that Altuve did not want his jersey ripped off after hitting a pennant-winning home run last year because a) his wife did not like when teammates did that and, b) he didn't want to show a bad tattoo. As chef's kiss as it would have been for Altuve's tattoo to say NO RAGRETS, alas it was something far more innocent: Melanie, the name of his 3-year-old daughter, next to a pink heart.

This did not exactly fit Correa's description of bad tattoo, but taste is relative -- and Altuve later admitted that the original version of the tattoo he got in San Francisco last fall during a road series needed touching up, which seemed to intimate that Version 1.0 was indeed bad. The capital "M" did match the sliver of a letter that peeked out from under Altuve's jersey at times during the 2019 postseason, nullifying yet another conspiracy theory: that Altuve had gotten the tattoo over the weekend to corroborate Correa's story. This is where we are.

Less than a week into spring training, life with the Astros and all that orbits around their sign-stealing scandal is a witch's brew of ludicrous, sad, darkly humorous and tedious. The monotony of a typical spring has been replaced by the predictability of another big-name player lobbing a Sequoia's worth of shade at the Astros. Monday included Mike Trout, universally regarded as the best player in the baseball and the game's ostensible face, calling it "sad for baseball."

"When is it going to end?" one Astros player asked Monday, and the answer depressed him: No time soon.

And that's less because of amusing little sub-stories, like the Altuve tattoo, and more due to the runaway-train nature of the fallout from Houston's cheating in 2017 and 2018. There is anger, inside the sport and out, and it is the most intransigent sort: righteous, moral, vitriolic. The Astros and Major League Baseball have tried to stanch the bleeding and instead have only deepened the wound through a combination of ill-conceived words, questionable accountability and disproportionate punishment.

• Passan: Buzzers, burner accounts and conspiracies: Inside a day of epic chaos

What makes this calamity so fascinating are the many layers to this lack of punishment, which in recent days has been as prevalent a complaint from players as any. That in and of itself is fascinating -- the almost self-selected bifurcation of the MLB Players' Association into 1,160 players on one side and the 40 Houston Astros on the other -- but lost amid the criticism of the players and commissioner Rob Manfred's grant of immunity is an important truth.

It's a dissatisfying one, too, for those who see the incongruity in Manfred's report calling the trash-can thwaps a "player-driven scheme" and then not disciplining the players in any form. Player-on-player crime and bad news conferences and telestrator breakdowns of tattoos are one thing. Entirely different is how the case wends its way into the murky waters of labor law, and how the decision to ignore an email placed baseball in such a precarious place.

Flash back to Sept. 15, 2017. The Boston Red Sox had been caught decoding sign sequences in their video room and using a cellphone to pass them along to those on the bench via Apple Watch. MLB fined the Red Sox -- players escaped discipline from that episode, too -- and sent a memo to all 30 teams. The memo, according to sources, included a line that said: "Finally, each Club's General Manager and Field Manager will be held accountable for ensuring that the rules outlined in this memorandum are followed by players and Club personnel."

This is a vitally important sentence, because with it MLB placed the onus on teams -- and, in the Astros' case, general manager Jeff Luhnow and manager AJ Hinch -- to alert players that they would face discipline if caught using technology to steal signs. During MLB's investigation into the Astros' sign stealing, the league learned, according to a report Manfred issued in January, that "Luhnow failed to take any adequate steps to ensure that his Club was in compliance with the rules." Similarly, players interviewed said Hinch had not informed them of the potential for discipline. 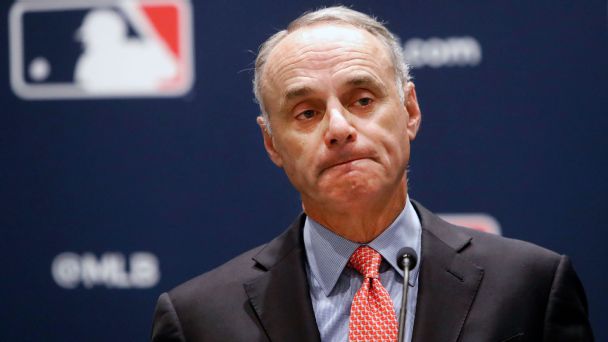 ESPN's Karl Ravech talks with commissioner Rob Manfred about the Astros investigation and reaction to his penalties in an exclusive interview. Video

In doing so, the players had not received proper notice required by employers to union employees subject to actionable discipline. Notice is a key tenet of labor law, and without it, the standing of any potential discipline is flimsy.

What the league didn't figure was that indemnifying players would cause as severe a backlash as it has. The reality is MLB faced a Catch-22. To illustrate that, consider an alternative course of action in which the league, believing that the on-the-record statements of Mike Fiers to The Athletic, the surfeit of video evidence confirming the banging scheme and the testimony of front-office officials, Hinch and coaches, would be enough to make a strong case, sought discipline against the players.

There are two tracks here to understand. The first is the extent of such discipline. "I am a precedent guy," Manfred said at a news conference Sunday, and what he means by that is the league's discipline almost always adheres to prior standards. One could argue, fairly, that a disgraced World Series champion warrants a deviation from precedent, but then the ability for that to hold up in a grievance hearing that players surely would have pursued makes any discipline tenuous. Because the sign stealing and trash-can banging would be considered an on-field issue, and on-field issues rarely involve long suspensions, Manfred would have been hemmed in by how potentially minimal the suspensions he pursued would actually be.

Even more crucial would be the aforementioned lack of notice. Four labor lawyers with first-hand knowledge of the grievance process agreed: The lack of notice from the Astros to their players would have made any case pursued by the league practically DOA. Yes, grievance hearings do now and again end with surprising results, but the probability tilted significantly toward any potential suspension being overturned, the lawyers said.

Facing that reality, the league made a value judgment: It would offer the players immunity in hopes of gathering the full story of the Astros' sign-stealing exploits and rely upon the details of Manfred's report to bend the public toward the idea that the league had sought and delivered justice.

Even if this was the best of a bad situation, it has backfired catastrophically. The outspokenness of players, whose own union agreed to give Astros players immunity, has been unwavering and unflattering. The Astros players, amid apologies that in many cases offered contrition, have been steadfast in the belief that they did not deserve discipline. The league, recognizing the futility of trotting out a legal argument to satiate the frothing masses, has instead tried to rely upon Manfred to douse a multitude of brush fires.

In some cases, the effort has been practical, but a lesson learned in times of crisis is that even the slightest misstep can color the intentions. During an interview Sunday, ESPN's Karl Ravech asked Manfred about the possibility of stripping the Astros of their title. In the middle of his slippery-slope defense, Manfred said: "The idea of an asterisk or asking for a piece of metal back seems like a futile act."

The blowback against Manfred was immediate. To trivialize a championship by calling it a piece of metal at a moment when everything he says will be dissected, when his motivations and intentions are in question, when his sport is in peril, gave a tanker truck of fuel to those who already think ill of him because he wants to change the game's playoff structure and contract a quarter of the minor leagues.

Fair or not, all of these things are inextricably tied together, because Manfred is supposed to be the sport's shepherd and his positions on those ancillary issues inform the public's opinion of him. A strong commissioner can guide a sport through a crisis. A weak commissioner can exacerbate it.

Get the latest on all MLB teams from spring training. Complete coverage.

Manfred's ultimate story is far from told. He can rescue his reputation and tilt this scandal away from catastrophe, but it is not entirely in his hands. The league's report on the allegations that the Red Sox stole signs electronically in 2018 is imminent. Alex Cora, the former Red Sox manager and Astros bench coach, likely will face discipline. He has yet to tell his story publicly. Neither has Carlos Beltran, the former Astros player whom Manfred's report said teamed up with Cora to implement the trash-can scheme.

All of that is to come. On Monday, the story was far less serious, silly even. Jose Altuve had a tattoo. What it might lack in beauty it makes up for in sentimentality. After Altuve finished his media availability and changed, there was a clang. A small fire extinguisher on the wall adjacent to his locker had fallen to the ground. Though it was unclear whether Altuve or a nearby cameraman had knocked it over, the metaphor wasn't lost on anyone. Monday may not have required its use, but there are plenty of brush fires to come yet.