PEORIA, Ariz. -- It was hours before Game 4 of the 2018 World Series. Los Angeles Dodgers star Manny Machado was in the weight room at Dodger Stadium, prepping for one of the biggest moments of his life. But in an instant, all that was put on hold. Kobe Bryant, Machado's idol, was in the nearby locker room, waiting to meet L.A.'s shortstop -- while wearing a Machado Dodgers jersey.

You wouldn't think a major league star would get nervous meeting another pro athlete. After all, Machado has been in the spotlight since he was a teenager, when he was drafted third overall by the Baltimore Orioles.

But this was different, an opportunity to come face-to-face with his idol. For as long as he could remember, Machado had loved everything about Lakers great Kobe Bryant, and in his telling of the story, the baseball star sounded as nervous as a 10-year-old boy.

"I'm working out," recalled Machado, now with the San Diego Padres. "I'm in the weight room getting ready for Game 4. And they come up to me and say, 'Hey, Kobe's here. He's in the locker room.' I'm like, should I stop what I'm doing? Or should I go say something to my favorite athlete of all time? I didn't know what to do."

Honoring the spirit of Bryant is the reason Machado felt the need to open up about his fondness for No. 8, the uniform number he chose when he was traded to Los Angeles in July 2018. If there was a silver lining to being dealt across the country, it was going to playing in the city where Bryant was a star.

Bryant was wearing that number when he arrived at Dodger Stadium for Game 4 in 2018. But it wasn't his own name on the back of the jersey.

"He was like, 'No, no, no, I want a Machado jersey,'" the Padres third baseman said. "When they told me that, I was like, 'What!? Are you serious?' There's no words to explain that. Kobe wants to wear my jersey. I was going insane."

As Machado was hurriedly finishing his workout in the weight room, Bryant was donning his jersey and waiting for him in the locker room. But before Machado could complete his last set, Bryant found him.

"He goes, 'OK, OK, I see you.'" Machado raised his voice and became more animated while imitating Bryant. "'I see what you're doing. I see you working hard.'

"So I kind of, like, finish my set. And I finally get up. And I introduce myself. I say I'm a huge fan. We talked for a couple minutes, and honestly, it was awesome."

Machado's dream of meeting his idol had come to fruition. All those years of hard work and inspiration stood in front of him for the first -- and last -- time.

"Honestly, I just wanted a picture," Machado said. "He puts his hand over my shoulder and right before the picture, he's like, 'Hold up, hold up.' He turns around. He takes off his Kobe blazer [to reveal his Machado jersey]. He's like, 'Now let's take the picture.' I mean, there's just no words to describe that feeling."

It's a moment Machado will never forget.

Although he grew up in Miami, thousands of miles from where Bryant played professional basketball with the Lakers, Machado gravitated to Kobe in the way so many athletes have expressed since his death. Bryant transcended sports -- and, apparently, time zones.

"Honestly, it was either the Heat on TV at the time or the Lakers, at 10 o'clock at night," Machado said. "So once I got done with my homework and got done with my baseball practice, I would get home, watch the Lakers play, and every time you saw Kobe step on the court, you kind of just knew that presence that he had. That's something that, as a kid, as an athlete, you admire, you look up to. 'How does he make it look so easy? I want to be like Kobe.'" 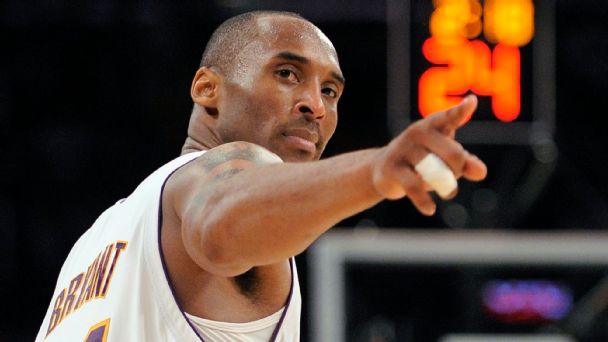 Remembrances and reaction to the death of Lakers legend Kobe Bryant. Index

Machado is just one athlete on one team, but through his eyes, as well as those of his Padres teammates, you can begin to understand what Kobe Bryant meant to others striving for greatness. Every night, the stands were full of admiring and rabid Kobe fans, but the inspiration he gave to aspiring athletes was just as powerful. The sports world and the public at large will honor Bryant and his daughter Gianna on Monday with a memorial service at Staples Center.

"My whole family is Lakers fans," Padres prospect Reggie Lawson said. "He's a living legend. I just got on the wagon, and when I started playing baseball, I just loved how he went about his business with that Mamba mentality."

Lawson had been planning to get a tattoo of Bryant on his leg already, but in the days after the helicopter crash that cost Bryant and eight others their lives, he did it.

"When I came out for spring training, I got it," Lawson said. "I was going to get it regardless, but now it was even more important."

Machado, who has a dog named (not surprisingly) Kobe, and Lawson aren't the only members of the Padres who want to keep Bryant's spirit alive. Pitcher Chris Paddack is petitioning the league to allow him to wear cleats in the Lakers' colors and that feature pictures of Kobe and Gianna.

The cleats, from Stadium Custom Kicks, are among the first of their kind, according to Paddack. When the picture of Kobe and his daughter on one side is scanned by a device, they appear in 3-D, and a song plays. Scanning the image of Kobe on the other side of the cleat triggers a recording of a pregame introduction of Bryant.

Paddack became a Kobe fan after reading the book "Relentless," written by trainer Tim Grover, who worked with Bryant and Michael Jordan, among others.

"I'm not a big reader, but I read that book cover to cover," Paddack said. "I just loved the way he went about his business. The legacy he's leaving, words can't describe.

"I thought it would be cool if baseball would let us honor him by wearing the cleats."

The broad appeal of Bryant isn't lost on Machado or his teammates.

"It's so interesting because the West Coast thing, usually you gravitate to where you are, but I think he became a worldwide sort of name, like Michael Jordan," Machado said.

"As an athlete, you appreciate what he's done. I appreciate it even more now. I'm in the position he was in. I'm one of the older kids on this team. I have to lead by example. I have to lead this team to a postseason, to a championship. He did that.

"I'm learning from him. How he worked, how he pushed other players to be the greatest. You can't take that for granted. If you don't put that blood, sweat and tears into your craft, you can never accomplish anything. That's what he did as a player, as a family man, as a husband, as a dad. He just did it all."