On the days when it feels like too much, like the world is caving in, Rene Saggiadi will walk toward the front door of the apartment he's not allowed to exit and look at the display that holds his World Series ring. It brings him comfort -- the thought of baseball, of the 2018 Boston Red Sox team that won a championship, of everything that mattered most until the coronavirus started ravaging his country.

Typically this time of year, Saggiadi, one of the foremost experts on baseball in Europe, is honing lists of players to follow and tournaments to attend as a scout for the Red Sox. Today he's on lockdown in Bari, a city on Italy's boot heel, for the 11th consecutive day. He patrols Twitter and reads "The Glory of Their Times" and talks to neighbors from his balcony and sings and tries to project normalcy in a moment that's anything but normal. He wishes for a reality that refuses to be, an end to the COVID-19 outbreak that has killed more people in Italy than anywhere else in the world.

"I just want to get back to my life," Saggiadi said. "And so does everybody else. Nobody's willing to give up because, I mean, what is the alternative? Just give up. And we can't do that. Humans don't do that. We have a history of surviving the most desperate situations, and we will get through this one as well. It's going to be painful. It's going to be long. But if you think about it, it's tougher mentally than physically. It's like being at war, but you're not fighting other humans like we used to do. We are fighting against an invisible enemy. And the only way to fight it is by doing nothing."

What Saggiadi can do is offer lessons to those around the world who aren't in countries on full lockdown like Italy, places that don't respect the merits of social distancing, people who see COVID-19 as a disease that afflicts only the elderly. His voice is just one, but it's one from the newest heart of the pandemic, and it sounds a stark warning that should resonate inside the United States and beyond.

ESPN Daily Podcast -- The Italian Scout: Baseball and the Center of the Pandemic

Saggiadi is no alarmist. He grew up in what he calls "delicate situations." His mother, an Italian diplomat, was stationed in Libya during Muammar Gaddafi's reign. She spent time in Afghanistan, Ethiopia, Ukraine and Georgia during its separation from the Soviet Union. Saggiadi lived in India as a teenager and attended the American Embassy School, where he fell for baseball. "Everything. I just love everything," he said. "I love the smell of freshly cut grass. I love the sound of the bat on the ball. I just love the strategy."

In the late 2000s, with a degree in computer science and business, Saggiadi gravitated toward the trove of PITCHf/x data available and figured perhaps he could latch on with a team as an analyst. Josh Byrnes, then the general manager of the Arizona Diamondbacks, instead offered him a job as a scout in Europe, and Saggiadi jumped at it. He spent time with the Los Angeles Angels before joining the Red Sox in 2014. He was married, living near the gorgeous Adriatic Sea, in a dream job. If life wasn't perfect, it was close.

Now, because of the coronavirus, he has left his home just three times: twice to take out the trash and once to buy groceries. His lively neighborhood is eerily quiet -- "beautiful and creepy at the same time," Saggiadi said. He can't leave his home without a piece of paper explicitly stating the reason.

"Literally we have started a practice of self-certification," Saggiadi said. "When you go out into the streets, for example, for grocery shopping, the police can stop you and ask you why you're around, and in that case, you have to say, we're around for like an emergency situation for going to work or coming back from work. To assist somebody who needs it or for grocery shopping. And they have the right to check on that. And if you are telling a lie, they can give you a ticket. And if you resist, they can actually even throw you in jail if need be. And while this does not look very democratic, it's actually within the constitution for medical emergencies. And it's really the only way we have to stop this virus from spreading."

If this seems draconian, excessive, Saggiadi would love to show you a copy of the edition of a newspaper in Bergamo, a city of about 120,000 in the Lombardy region, the center of the coronavirus outbreak in Italy. The standard obituary section runs one page. On March 14, it was 11 pages.

"They're way beyond ICU capacity," Saggiadi said. "So they cannot take care of all the people that need care. And so a lot of people are dying -- what otherwise would be preventable deaths just because there's too many. When people, when scientists talk about flattening the curve, what they're saying is that we can't avoid the virus spreading but we can slow it down so that it always stays below the hospital capacity so that hospitals can take care of each and every one of us if we need it.

"If you don't want anybody to die because of you, you have to stay home, even though you might be immune. And again, I want to stress the word might, because you might be immune or you might not. And you don't want to lose that lottery, because there's no coming back, especially with no vaccine. Yes, if you're young, the younger you are, you have a better chance at recovery. You have a better chance of getting it mildly or being asymptomatic completely. But it's only having a better chance. You're not immune to it. You might still get it. And even if you don't, what you could do is become a vehicle of contagion for weak people." 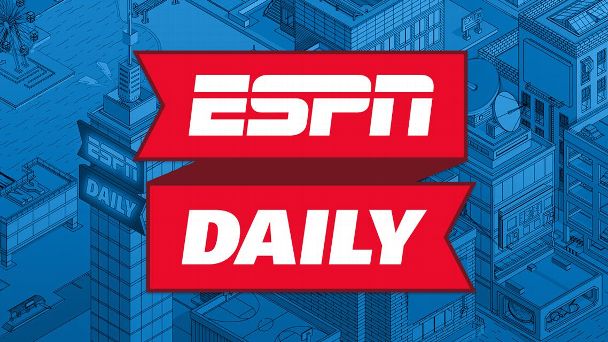 Jeff Passan tells the story of René Saggiadi, a Red Sox scout based in the Italian city of Bari. As his country deals with increasing contagion, we hear what happens when life and baseball pause, and how he's staying connected to the sport he loves.
Listen now!

When he saw the lax response in the United States to the coming coronavirus spread, Saggiadi unlocked his Twitter account and started broadcasting daily dispatches. He vowed to answer any and all questions. He wanted Americans to understand the threat. "It feels like we're in the same TV series," Saggiadi said, "but we're five episodes further along." He was compelled to show a world in which pizza delivery people were heroes.

"You can take away everything, but you can't take away pizza from an Italian," Saggiadi said. "So the pizza delivery guy was -- we are actually considering those guys and supermarket cashiers as first responders almost because they are risking a lot that you have to interact with a lot of people. So they are using masks, they're using gloves, but they actually keeping people from being insane. We were mentioning how hard it is, how lonely it is. So sometimes for lonely people, just getting something delivered home might be their only interaction for a week. So, yes, these people now, they are very important."

One of those lonely people, he fears, is his grandmother, Ersilia Cerasuolo. She lives in Lombardy. She is 96. She can't go to church, a daily activity. She can't take her postural gymnastics class. She can't check in on her friends, with whom she devised a system: If one's shutters aren't open by 8:30 a.m., the others call to check in and ring the police or an ambulance if there is no response. She can't cook for others, bringing little pillows of perfect gnocchi.

"When you go out into the streets, for example, for grocery shopping, the police can stop you and ask you why you're around, and in that case, you have to say, we're around for like an emergency situation for going to work or coming back from work. To assist somebody who needs it or for grocery shopping. And they have the right to check on that. And if you are telling a lie, they can give you a ticket. And if you resist, they can actually even throw you in jail if need be." René Saggiadi on the coronavirus shutdown in Italy

About 10 years ago, Ersilia underwent hip surgery so she could walk without pain, and that reinvigorated her, allowed her to scratch every social itch. Her relationships gave her life. And now her only interactions come via phone or chitchat on the balcony.

This is why Saggiadi worries. Because there are millions of Ersilias in Italy and the United States and around the world. And yet for that concern, that trepidation, that overwhelming sense of doom so familiar now to so many, Saggiadi does not let it win. He finds that comfort again in the game he loves.

"We find a way," Saggiadi said. "And, you know, that's -- I don't want to sound corny, but that's kind of what baseball is all about, right? You asked me why I love baseball. Well, one of the reasons I love it is because there's no time limit. You might be down seven in the ninth inning with two outs and nobody on base, and you may still win the game until you make the third out. You have a chance. There's no clock to run out. The best teams will find a way, and that's just poetic and romantic and it's all about life as well. This is what we're doing. It doesn't matter how bad it looks, it doesn't matter how many people have died so far and how many more will die.