This was supposed to be opening week, the time when MLB fans everywhere look forward to making a season's worth of memories. Since we won't have games to get excited about for a while, we thought it would be fun to take a walk down memory lane by reliving some of our favorite baseball moments.

In the fourth installment of our weeklong series focusing on a different baseball theme each day, we asked our MLB reporters to tell us about the best defensive plays they ever saw, with only one rule: They had to have seen it in person.

New York Mets left fielder Endy Chavez against the Cardinals in Game 7 of the 2006 National League Championship Series. For all of baseball's unforgettable moments in the postseason, there haven't been as many brilliant defensive plays as you might think. One of the best ever is one that will never get proper recognition.

MLB Best We Ever Saw Week 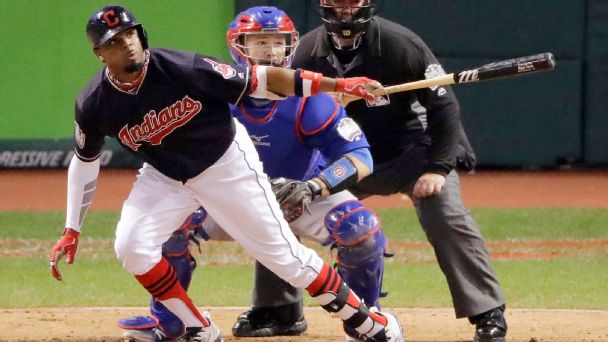 In the weeklong series focusing on a different baseball theme each day, we asked our MLB reporters to tell us the stories of the best they ever saw -- with only one rule: They had to be there to witness it in person.

The Mets and St. Louis Cardinals were tied 1-1 in the sixth inning when Scott Rolen hit a fly ball to deep left field. Chavez always wore one of the biggest gloves I have ever seen, bigger than that of Yoenis Cespedes, almost as big as Brett Butler's, even bigger than the glove of pitcher Greg Maddux. Chavez leaped, slammed into the left-field fence, reached a good foot above it and caught the ball.

The catch was somewhat lost in history because Yadier Molina hit a two-run homer in the top of the ninth for a 3-1 lead, and with two out and the bases loaded in the bottom of the ninth, Carlos Beltran struck out looking at a curveball by Adam Wainwright, ending the Mets' season.

One hundred forty-two voters chose to not include Roberto Alomar on their ballots the first time he was eligible for Hall of Fame induction, driving his vote percentage below the necessary 75% threshold for election. This was utterly shocking to me after hearing Alomar's peers rave for years about his incredible defensive skill, as well as his imagination for what was possible. Like Wayne Gretzky and Magic Johnson, he seemed to have an understanding of where everyone on the field was. With his balletic inspiration, Alomar changed the way defense was played for generations of middle infielders who followed him. 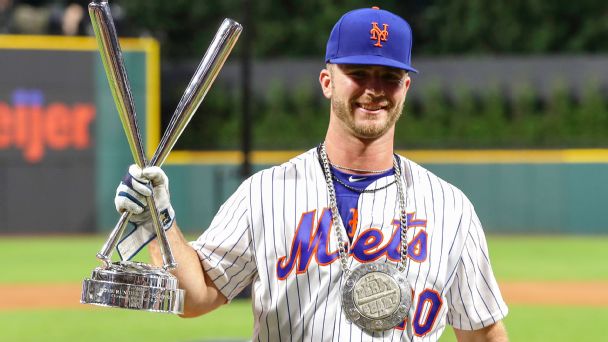 On Thursday, March 26, ESPN2 will be airing a Home Run Derby Classics marathon starting at 6 p.m. ET. How to watch »

In a game between the Orioles and Red Sox at Camden Yards in 1996, Boston's John Valentin rounded third base on a ball hit into the right-field corner, and Alomar, set up for a relay along the right-field foul line, caught the throw with his body aligned to rifle homeward. But midturn, Alomar fired all the way across the infield to third base, where Valentin had taken a wide turn. Valentin had no chance to get back to the bag, and he looked stunned as he was tagged out. It was among the many defensive alternatives that Alomar seemed to discover regularly.

David Schoenfield: You can top this? Gimme a break

This isn't just the best defensive play I've ever seen in person -- it's the best defensive play of all time. That's right. Forget Willie Mays' catch in the 1954 World Series. Forget Ozzie Smith's bare-handed grab of that bad-hop ground ball. This is it. Buck Martinez for the Blue Jays on July 9, 1985. Don't even argue about this because you'll lose.

Let's run down what happened here:

1. Jesse Barfield, who had one of the best arms of all time, throws an absolute howitzer from right field.

2. Phil Bradley, a former starting quarterback at Missouri, destroys Martinez in the collision at home plate. Martinez breaks his leg but manages to hold on to the ball.

3. Stormin' Gorman Thomas keeps on chugging around the bases.

4. Martinez, who can't get up because HE BROKE HIS LEG, throws wildly to third base. Thomas turns for home.

5. For some reason, George Bell (not pictured in the video because we needed to see the dude in the green shirt) is actually backing up the play and throws home.

6. Remember, MARTINEZ CAN'T GET UP BECAUSE HE HAS A BROKEN LEG. Bell's throw somehow finds Martinez's glove.

7. I have no idea what Thomas was thinking, but he somehow fails to avoid the tag. Martinez gets his second out at home plate, is carted off the field and misses the rest of the season.

Kirby Puckett, 1991 World Series, Game 6, third inning. Amid the cacophony of the Metrodome -- imagine the sound of 50,000 frightened macaws in a closet -- Ron Gant of the Atlanta Braves hit a drive to left-center. Puckett, the Minnesota Twins' center fielder, ran farther and faster than he seemed capable of doing and jumped higher than seemed possible. At the peak of his leap, his glove smacked against the Plexiglas as the ball landed inside it.

As Puckett fired the ball back toward first base to attempt to double up Terry Pendleton, Gant rounded first base and veered toward the dugout without taking his eyes off Puckett. He wasn't mad or even frustrated; he, like the rest of us, was trying to process what he'd just seen. I'm sure I've seen better plays -- Kevin Mitchell caught a ball bare-handed -- but the combination of artistry and the importance of the moment makes this one hard to beat.

Sam Miller: Simmons does the unthinkable

Defense is hard enough to precisely measure in the present, in front of us and with modern technology, let alone decades after the fact. As such, I wouldn't say definitively that Andrelton Simmons is the greatest defender of all time, but I believe it's true, and I watch him with the joy of believing that's what I'm seeing. At least once every few games, he does something with his body that is worth rewinding and rewatching, and at least weekly, he makes a play that is impossible for all but maybe a half-dozen other humans on the planet.

Out of literally hundreds of Simmons highlights, this is probably my favorite, not because it's especially explosive, flashy, physical or imaginative -- all qualities he has -- but because of how surprised the baserunner, the broadcaster and Simmons' third baseman are that he made the play. That, to me, is the most persuasive endorsement of a defensive play.