Jhonny Pereda thought the call was a prank.

With everything happening in the world, with Major League Baseball shut down due to the coronavirus pandemic, with his minor league income suddenly up in the air, Pereda couldn't believe he'd just been traded from the Chicago Cubs. As he sat in his Mesa, Arizona, hotel room holding his infant daughter, Carlotta, Pereda received a second call from Boston Red Sox assistant general manager Eddie Romero, confirming the news he'd just gotten from the Cubs.

That's when his new reality set in.

"I was just hoping and looking forward to the beginning of the season and to start making money," Pereda, a 23-year-old from Aragua, Venezuela, told ESPN through a translator. "I have to give support to my family. When I found out that the season was over, my first thought was, 'What am I going to do?'"

Boston acquired Pereda from the Cubs last Monday, completing a trade finalized in January that sent righty Travis Lakins to Chicago -- making Pereda the first player traded during the worldwide pandemic. When MLB decided last week to freeze rosters due to the suspension of the season, Pereda was joined by Rays minor league infielder Esteban Quiroz as the only players traded.

The terms of the Lakins trade required a player to be named later to be agreed upon by March 24. Last season, Pereda won the Gold Glove at the catcher position for all of minor league baseball, throwing out 50% of runners. Left unprotected by the Cubs in the Rule 5 draft, Pereda re-signed with the organization on a minor league deal this offseason before being dealt to Boston.

"We had to complete the trade by the 24th," said Red Sox general manager Brian O'Halloran. "Nobody was sure how things were going to go with the negotiations when the potential transaction freeze might take place. We were sort of resigned to the fact that it was unusual, but we were going to acquire a player that we couldn't see in person and that we couldn't have report to Fort Myers [Florida] and we just had to treat him as best as we possibly could."

His world now flipped upside down, Pereda's mind raced. What should he do next? He wondered if he needed to fly to Fort Myers to join the other minor leaguers in the Red Sox organization. Like many players from Latin America, Pereda thought too about his family back home, who depend on his baseball salary.

"Coming from a third-world country where everything is very hard and tough, with the entire situation, I just wish that MLB and other people can help the minor leaguers [more] than they are doing right now because we need that money to live and provide for our families," Pereda said. "I think I can speak for all the Latin-American players, coming from there to the States, when we arrive to this country, it is because we are going to work and we are trying to make money to provide for our families.

On March 19, MLB announced it would offer minor leaguers a "uniform compensation" package that would cover the period between mid-March and the start of the minor league season, but no further announcement has been made about compensation with the suspension of play now cutting into regular-season games. [Editor's Note: A few hours after this story was posted, MLB announced it would extend pay and benefits for minor leaguers until May 31 or until the start of their season.]

Pereda doesn't know what he'll do if there isn't more clarity soon. Pereda supplements his baseball salary by herding cattle during the offseason after investing in cows with his signing bonus.

On his phone call with Romero, Pereda was told the Red Sox would continue to pay for his hotel in Mesa, located near the Cubs' spring training facility, telling him to stay put for the time being. When Pereda asked about his salary, he was assured the organization would support its minor leaguers.

"I'm still not clear about quantity or how much it's going to be, if it's going to be meal money or if we're going to receive something weekly, so I'm just hoping this situation gets solved. I'm waiting to hear more. A lot of other guys are, too."

O'Halloran said the Red Sox have not made a decision regarding minor league salaries.

"We're glad to see something was resolved whenever that was, a week or so ago, for the minor league players on the allowances standardized across the game," O'Halloran said. "We were pleased with that and everything going forward is going to be dependent on what we hear from the league and what we hear from other clubs, but our general stance is that we want to make sure all of our players are in good health and have what they need, so we're looking forward to resolving that as I'm sure everybody is across the league as we go forward." 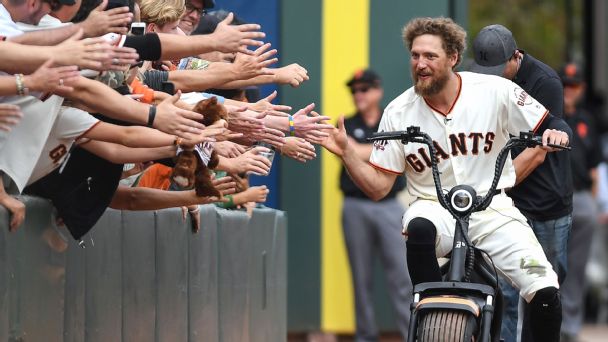 From Twitter to Twitch, these 10 players are providing a window -- often silly, sometimes serious -- in an unprecedented time in baseball history. Joon Lee »

Pereda prepared himself to dip into his savings account during this time to afford living in the United States. Back home, an inexpensive meal costs around $4 versus $15 here, according to Numbeo. Venezuela currently faces massive nationwide food shortages with the country's financial collapse over the past decade that economists say is worse than America's Great Depression.

Pereda thought about his wife, Griscarly Arias, and his daughter, both of whom came with him to spend the baseball season in America for the first time, navigating a new country, culture and lifestyle without speaking fluent English.

"The whole situation has me very concerned," Pereda said. "I don't want to miss a whole year without playing baseball and without getting my salary and the support to my family. I'm just hoping and praying every day for this situation to settle as soon as possible and we can start playing."

This is certainly not how he imagined bringing his family to the United States.

"It was completely shocking because it was [my wife's] first time coming to the U.S. just to see how everything was happening," Pereda said. "She was a little nervous about the situation, not being in her hometown and just trying to adapt to this system and culture and then this happens. We just have been working together as a family, try to stay together and stay home and trying to deal with the whole situation. This is out of our hands, so we are trying to go with the flow."

Pereda dreams of playing for the Red Sox at Fenway Park, but he spent the initial days following the season's suspension going to the Cubs' facility and hitting and throwing with his now-former teammates.

"A lot of teammates and coaches were surprised and asking, 'Hey, what are you still doing here?'" Pereda said.

Pereda is anxious to meet his new teammates, whenever that might be. But before that meeting can happen, he'll need to weather the storm during this unprecedented work stoppage.

When the Cubs' facilities shut down, Pereda found himself running near the hotel, looking for ways to work out with the other Venezuelan prospects stuck there with him. For now, Pereda said he and the other players avoid the topic of their long-term finances. Instead, their focus remains fixed on their families and their future in baseball, while their present becomes increasingly fuzzy.

"Just the cost of life of being here is very expensive and not only not having money to sustain ourselves here, but not being able to provide to our families back home, it's really frustrating," Pereda said, adding he feels minor leaguers aren't being heard in the conversation about what's happening in baseball right now. "Not listening to anything from us about it, it really hurts us."