As baseball's work stoppage lingered into the spring of 1995 and camps opened amid a loose plan for the teams to use replacement players, a small group of Baltimore fans gathered near the parking lot entrance to the Orioles' facility, bathed in orange T-shirts and caps. They clutched baseballs, bats and file folders with cards.

"Who are you guys waiting for?" I asked, walking past, at the outset of the first of two years covering the Orioles for the Baltimore Sun.

I stopped for what I thought might be a public service for this clan huddled under a rising, hot Florida sun. Cal Ripken Jr. won't be coming today, I said. The players are on strike, and no resolution is imminent. Cal is probably back in Maryland.

Relive 13 of baseball's finest pitching performances, from Don Larsen's perfect game in Game 5 of the 1956 World Series to Roy Halladay's no-hitter in the 2010 NLDS. Stream classic perfect games and no-hitters on ESPN+.

They responded with polite smiles but never moved, and were still there when I walked out at day's end, still holding their unsigned memorabilia. That resolute ardor for the Orioles' shortstop grew exponentially as the labor problems were settled, the players went back to work and Cal's consecutive-games streak continued. As union leaders Tom Glavine and David Cone would attest, that was a difficult year for the players generally, as frustrated fans expressed their anger over the interruption of baseball, the loss of the 1994 postseason and World Series.

But for Cal, there was only love and respect. The notion that the 1998 home run race between Mark McGwire and Sammy Sosa saved the sport of baseball is a popular narrative I've never believed, having witnessed the day-to-day response to Ripken around the country three years earlier.

Cal's 1995 march on Lou Gehrig's record, which culminated at Camden Yards in games 2,130 and 2,131 on Sept. 5 and 6, was exactly what the sport needed as it returned, and he was exactly the right person to provide it, because his consecutive-games streak was built upon an ethic fans wanted to see. He rightly referred to the fans' reaction to him as a celebration of baseball, and that occurred day after day when Cal was on the field, out in the open.

Here are some of the other bits of the summer of 2,131 that weren't always in plain sight for fans.

1. His autograph sessions were legendary.

You might have heard stories about Cal turning into a one-man autograph machine that year, and assumed such tales are exaggerated, or apocryphal, or myths borne through the fog of time.

Well, the stories are true.

But in the midst of the '95 season, he began to hold some postgame, late-night autograph sessions, home and road. After games, he'd retreat to the clubhouse for a quick bite to eat, and then take a seat next to the Orioles' dugout -- in my mind's eye, I can still see him with a towel draped over his shoulder -- as one single-file line snaked around the ballpark, extending to the left-field corner. And he would sign for everybody who took the time to wait, putting his name on baseballs, programs, bats, tickets, scraps of paper.

"It really began due to a simple surplus of energy, postgame," said John Maroon, who led the Orioles' media relations department. "He was pretty wound up after the game and he was getting a lot of requests from fans for signatures, so it started fairly generically and then became a thing. People started to clamor for it, and ask about it."

I can't remember actually timing those sessions, but they'd last more than an hour, easy. I'd return to the press box from the clubhouse, rewrite a game story, refresh the notebook -- and as I packed up my stuff, he'd still be signing.

The peak of his autograph work that summer, however, occurred at the All-Star Game festivities, in the middle of a deadly heat wave. Arlington, Texas, was the site of the event that year, and it was so hot, more than 100 degrees, that a lot of players understandably retreated into the air conditioning after they completed their round of batting practice. Cal remained outside to sign ... and sign ... and sign ... moving along the foul lines.

The late, great Gerry Fraley covered the Rangers at that time for the Dallas Morning News, and no writer had a more acerbic sense of humor. He was difficult to impress. But even Gerry stopped me to remark on Cal's effort to connect with fans.

2. Teammates believed he possessed a special power of recovery.

I can recall Roger Clemens drilling Brady Anderson in the middle of the back with a fastball, and the next day, most of Brady's back was covered with a massive bruise. Players get hurt, they bleed, they bruise.

But Cal's injuries just seemed to disappear. Former Orioles pitcher Ben McDonald inhabited the locker next to Ripken's and in a recent interview, he told a story of seeing Cal get hit by a pitch -- and when Ben asked Cal to see the resulting damage, there was nothing. A lot of teammates had stories like that, from the 15-plus straight seasons he played without missing a game.

3. Pitchers on other teams were seemingly scared to death by the prospect of injuring him.

The consecutive-games record was odd because no matter how effectively Ripken played, you knew well in advance the exact date he would pass Gehrig's milestone -- assuming he was able to stay healthy. One errant pitch had the potential to change that, of course, and I remember there being some angst when Cal was hit a couple of times early in the season -- in the fourth game of the season, and again two weeks later. This was not unusual: During the course of his career, he'd get hit anywhere from four to seven times a year. 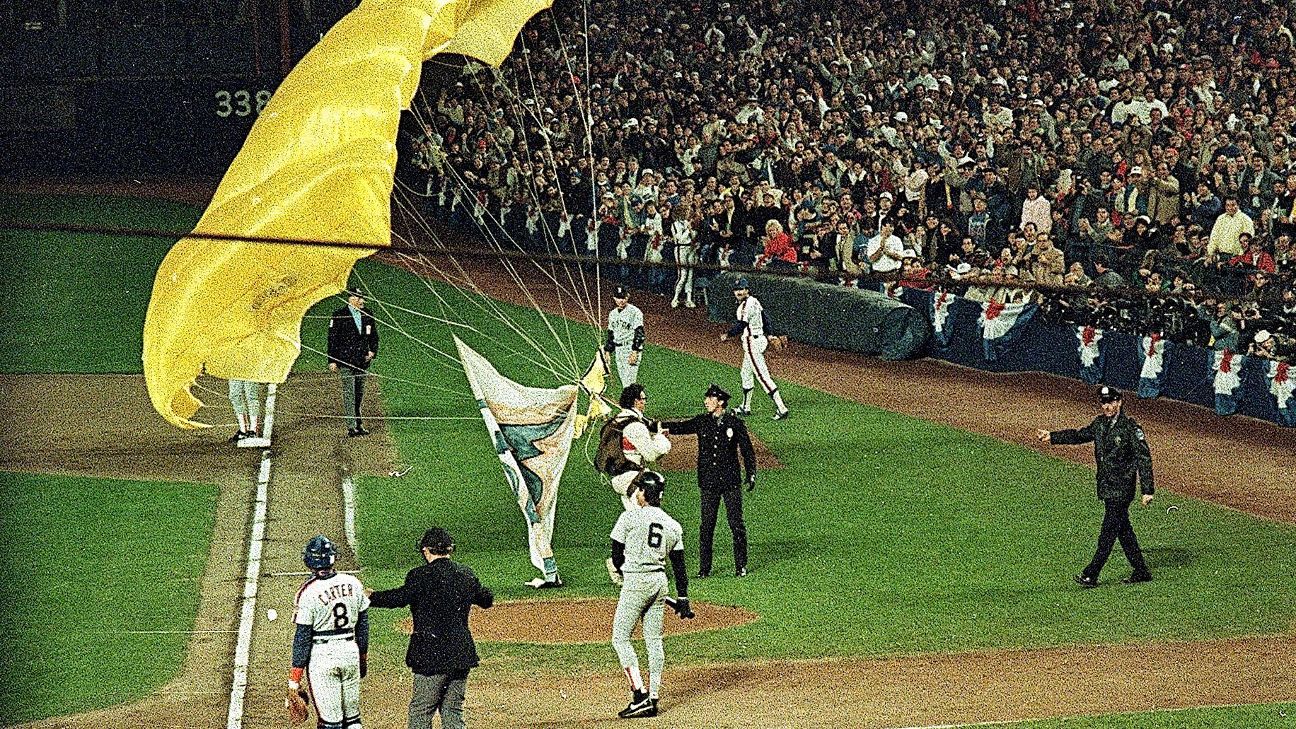 Beer flights. Knife fights. Planes, trains ... and parachutes? The most meme-worthy moments ever for all 30 MLB teams. Sam Miller »

Mike Flanagan, a coach for the Orioles that season, was the first to notice how opposing pitchers seemingly shied away from throwing inside to Cal.

In fact, he was not hit by a pitch in Baltimore's last 130 games. Everybody in baseball wanted to see him set that record.

4. The record-setting game was such a celebrated event that President Bill Clinton attended.

Clinton was in the ESPN booth when Cal hit his home run -- of course he homered in No. 2,130 and No. 2,131 -- and overpowered Chris Berman on the microphone, no small feat.

5. Cal fell into a deep slump after he broke Gehrig's record, which wasn't a surprise, given the enormous amount of energy expended in the run-up to the big day, and all of the stuff happening for games 2,130 and 2,131. Over the next 13 games, Cal went 3-for-44 with no extra-base hits.

On a Saturday afternoon at Tiger Stadium on Sept. 20, he was hitless in three at-bats. The press box was situated very high behind home plate in that old ballpark, and as I wrote my story after that particular game, I glanced to the field -- and saw someone walking toward home plate, carrying a bucket of balls and a batting tee, with a bat wedged in his armpit.

It was Cal, going to work, alone.

He whacked baseballs into the empty outfield before accepting the penance of retrieving them -- with help from a teammate or two who emerged from the clubhouse to join him -- and then repeated the drill.

He was baseball's most powerful player, its most credible figure, owner of the year's most celebrated record, and in an empty park following a meaningless game for a team out of contention, he looked for a fix to his slump.

And he got three hits the next day.