PORT CHARLOTTE, Fla. -- In the final days of spring training, before the abrupt closure of camps due to the coronavirus pandemic, the Tampa Bay Rays twice deployed a four-man outfield against Ozzie Albies in a game against the Atlanta Braves. That in itself isn't remarkably unique, as the Rays used four outfielders on occasion last season. What was unusual was the player the Rays deployed it against -- and especially the situation the second time they tried it.

In the first inning with one out and nobody on, Albies, a switch-hitter batting from the left side, came up, and second baseman Mike Brosseau moved into right field, with the four outfielders fanned out across the grass. Albies lined out to left-center, an easy play for Randy Arozarena, whereas in a traditional three-outfielder alignment, the ball might have dropped in for a hit. In the third inning, Albies batted with two outs -- but this time with a runner on first base. Albies showed bunt on the first pitch, then fouled off several pitches down the left-field line, trying to hit the ball the opposite way, before eventually striking out.

"It's more with the guys with the ability to hit the ball in the air, just trying to take away the extra-base hits," he said. "We're willing to give up a single on a certain side of the field. We do it with some athletic guys, but usually it's more the big power-type guys -- where it's like if they hit a single, we'll gladly be OK with that because now it's going to take two more hits to score that guy."

The game against the Braves was a split-squad affair, and Kiermaier wasn't in North Port that day. When told the Rays used the alignment with a runner on first, he was a little surprised. "Usually we only do it with no one on base," Kiermaier said, "but in spring training, I guess you can sit here and do different things, so that might be the first time that we've done it with a runner on base. We are not afraid to be unorthodox." 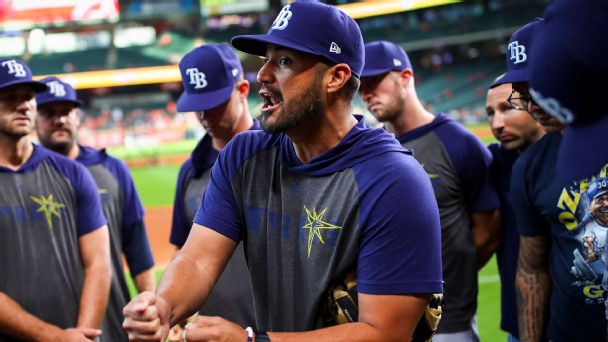 English lessons, iPad workouts and home cooking are some of the ways teams are helping minor leaguers who couldn't get home when camps were closed. Alden Gonzalez and Marly Rivera

Indeed, from the same innovative organization that gave us the shift and the opener, the four-man outfield might be the next defensive revolution in baseball. According to Sports Info Solutions, in 2018, there were 37 four-outfielder alignments on balls in play across the majors. In 2019, there were 101, with the Rays' 48 accounting for nearly half of those. (The Reds had 35, so two teams accounted for 82% of the four-outfielder setups.)

Tampa Bay manager Kevin Cash suggested this isn't just a spring training experiment and that there could be times when the Rays use four outfielders with a runner on base during regular-season games.

"I think we're going to find some situations where we can use that," he said in March, and not just when left-handed batters are at the plate. "Even if there's a runner on third base and less than two outs, it might be beneficial. This is a good time to explore these things, and when a ball is put in play, we learn a little bit from it."

I would argue there have been three major developments in devising defensive game plans during the live ball era (aside from changes in pitching strategy). In chronological order:

1. The first of these occurred after offense soared in the 1920s. In the dead ball era, a period lush with sacrifice bunts and other small-ball tactics, playing third base required quickness and agility and was more of a premium defensive position than second base. We know this not just from the literature of the era, but because second basemen -- with the likes of Nap Lajoie, Eddie Collins and Larry Doyle -- collectively outhit third basemen in most seasons. With the advent of the livelier ball, however, third basemen and second basemen had flipped in defensive importance by 1930, and third base became more of a hitter's position. (Likewise, first basemen of the dead ball era such as Hal Chase and Frank Chance were lauded for their defensive abilities, but first base soon became a slugger's position.)

2. The advent of artificial turf -- first with the Astrodome in 1966, then with the construction of numerous multipurpose stadiums in the 1970s -- put a renewed emphasis on speed, especially in the outfield. The new stadiums generally had bigger outfield dimensions than their cozier predecessors, and the ball would scoot rapidly across the fake grass. Whitey Herzog built entire teams around speed and defense in Kansas City and St. Louis. In the spacious Astrodome, the Astros fielded outfields with three center field-caliber defenders, such as Jose Cruz, Cesar Cedeno and Terry Puhl. The occasional lumbering corner outfielder still existed -- think Greg Luzinski -- but not to the extent we saw in the 1950s and 1960s.

3. The third change was extensive use of the shift, first popularized by the Rays under Joe Maddon around 2010 and now used with such increasing regularity that it's a routine part of the game.

The four-man outfield isn't exactly new. It has been used in isolated cases for decades against sluggers such as Willie McCovey, Harmon Killebrew, Frank Robinson and Mark McGwire. Herzog used it against Jim Rice in 1978. Still, the four-man outfield was not used at all in 2016 and just once in 2017. This whole idea is still in the embryonic stage, and it will take more than just one team to start a revolution. The Pirates, under new manager Derek Shelton (who spent seven years as hitting coach for the Rays), also experimented with four-man outfields in spring training, so maybe the wave is beginning.

No team is better equipped to use the tactic than the Rays, who have long stressed versatility from their position players. Brosseau came up through the minors as an infielder before playing 33 innings in the outfield as a rookie last season. All-Star second baseman Brandon Lowe started five games in the outfield, and the Rays indicated he could see more time out there this season. Joey Wendle has played both infield and outfield. Even in the minors, top-100 prospect Vidal Brujan has the speed and agility to play the outfield, if needed, and the team acquired speedy infielder Xavier Edwards in the Tommy Pham trade in part because of his potential to play on the grass as well.

"There are some things you have to get comfortable with," Brosseau said. "I guess it's still fairly new in the organization. Last year was the first time I ever experienced it."

Before the game against the Braves, the Rays coaching staff had discussed the parameters in which to use the four-man outfield against Albies and Austin Riley, a right-handed hitter. Against Riley, the third baseman moved down the left-field line.

The decision on whether to use the alignment also can depend on the pitcher. If the pitcher throws a high-spin fastball up in the zone that generates a lot of fly balls, the Rays are more likely to use four outfielders. Minor leaguer Joe Ryan was the starter in the Braves game, but when side-arming reliever Ryan Thompson, a pitcher more likely to produce grounders, was on the mound, the Rays played a conventional defense for Albies' third plate appearance.

Relive 13 of baseball's finest pitching performances, from Don Larsen's perfect game in Game 5 of the 1956 World Series to Roy Halladay's no-hitter in the 2010 NLDS. Stream classic perfect games and no-hitters on ESPN+.

Still, Brosseau said the second Albies at-bat, with the runner on first, was "super interesting." As he explained, if there's a base hit, it's a race between the baserunner and the shifted fielder to get to third base, "but you can't really throw to a fielder on the run and expect him to make the tag. There's still some experimenting to go on."

Cash admitted in that scenario that you're basically conceding the runner going to third base. Maybe so, but it still takes another base hit to score the runner -- and that's the whole point. Eliminate the double that could bring home the man on first.

In 2020 baseball, with strikeouts higher than ever and singles at their lowest percentage of overall hits in history, it's more difficult to string together three singles in one inning to score a run. The goal of the four-man outfield, thus, is to eliminate -- or at least cut down -- on extra-base hits. While the overall average rate of doubles per game has remained fairly constant for the past 25 years (although the rate of 1.76 in 2019 was the highest since 1.80 in 2009), the lower batting averages and increasing rate of home runs means a higher percentage of balls in play are doubles:

A key for the Rays' approach is how the whole operation is a collaborative effort between the front office, the coaches and the players. General manager Erik Neander described the Rays' philosophy as being instrumental behind all their innovations. This isn't a dictatorship implementing analytics without involving the players. Indeed, Brosseau and pitcher Ryan Yarbrough brought up the same collaborative process without being asked about it.

"It comes down to how comfortable we feel," Brosseau said. "The more non-game reps we get, and then try to transition that into games to where we're comfortable with how it fits. Two doubles in a row, that scores a run. Two singles in a row, you can live with that. The whole process is very open. There's a lot of communication. The front office isn't just throwing stuff at us."

The Rays hadn't used a four-man outfield behind Yarbrough in spring training -- he is basically the exact opposite of a high-spin fastball pitcher and relies on inducing soft contact and ground balls -- but he understands the rationale behind it.

"We know when [we] do deploy it, it's for a reason," he said. "I don't think you ever try to second-guess. They have reasons to back it up, so they're doing it for our best interests."

Does it all feel like too much of a drastic change? Too much risk? Imagine a scenario where Albies lays down a bunt single and the next batter hits a three-run homer. Sure, that could happen, but think of all the scoffing directed to the shift early on. Some of that criticism lingers. But in 2011, there were 2,350 shifts across the majors, and in 2019 there were more than 46,000. Just as it became overwhelmingly clear that most ground balls are pulled, the logic of using more four-man outfields will surface -- and, no, it's not that easy to just slap the ball to left field for a base hit or lay down a bunt. That's why the usage of shifts continues to increase.

So expect to see more four-man outfields when baseball resumes, at least from the Rays.

"I wouldn't doubt it," Yarbrough said. "If we're trying it out now, I'm sure at some point it will be pulled out."