If you're really going to get into this thing, you've gotta pick a team.

That was my first thought as rumors swirled that KBO broadcasts might be coming to ESPN and there might be a way someone who is very much missing the sport to watch live baseball every day while we wait for the majors to return. And that is my first bit of advice to you, because if you're reading this, we can assume you've either joined me on the 2020 KBO bandwagon or you're at least curious about climbing aboard.

Flash-forward two weeks and my mornings start with hours of live (or newly DVR'd) Korean baseball. I regularly open conversations by saying, "If you know what happened in the KBO game, don't tell me. I recorded it." My house is divided when my NC Dinos square off with my wife's adopted KT Wiz -- a rivalry I'm dominating thus far. My sudden expertise has even landed me a role as a voter in ESPN.com's now world famous weekly KBO Power Rankings, although being an ESPN MLB editor helped me get the gig.

From that initial task of picking a team and learning to appreciate breakfast baseball to discovering what's the same -- and much different -- about watching the KBO from MLB, here's my two-week crash course to get you up to speed on the Korea Baseball Organization.

The rules of picking a favorite KBO team

Picking a team sounds easy enough, right? The only problem: Entering the season, my entire knowledge of KBO teams consisted of remembering Eric Thames played for one called the Dinos before he joined the Brewers, and that Hyun-Jin Ryu's old KBO images showed him in a jersey with Eagles across the front.

Luckily, ESPN happens to have an in-house KBO expert in Joon Lee, who wrote this handy guide to each team, so I set my own ground rules and headed to Joon for a final decision.

First, if you are choosing a team now, it's because you want to actually watch them play, so I narrowed the field to teams appearing most on ESPN's broadcasts. And while jumping on the KBO bandwagon is cool, jumping on a winning team bandwagon still seems wrong. With that in mind, I ruled out the defending champion Doosan Bears, the Kia Tigers -- described as the Yankees of the KBO. No thanks. -- and the Kiwoom Heroes for being No. 1 in our preseason power rankings.

All this left me with a choice between the NC Dinos and the LG Twins (yes, KBO teams have names that include corporate sponsors like Kia, LG and Samsung) to which Joon responded:

Boom. A brand-new lifelong die-hard Dinos fan is born. And if the Dinos' 8-1 start is any indication, Joon was right.

Pick a favorite team. Check. Now it's time to actually watch some baseball! From the first pitch on Opening Day on, just tuning in to live baseball right now feels incredible, but it doesn't take long to notice what's different from MLB.

When you turn on a major league game, the odds are pretty good you're going to see a pitcher pumping high-90s heat. That's not going to happen in the KBO. In fact, the average KBO fastball velocity this season sits at 88.6 mph compared to the 93.1 mph average in MLB last season. What does baseball look like without a Noah Syndergaard or Aroldis Chapman touching triple digits on the radar gun?

What if Trout played in the KBO? 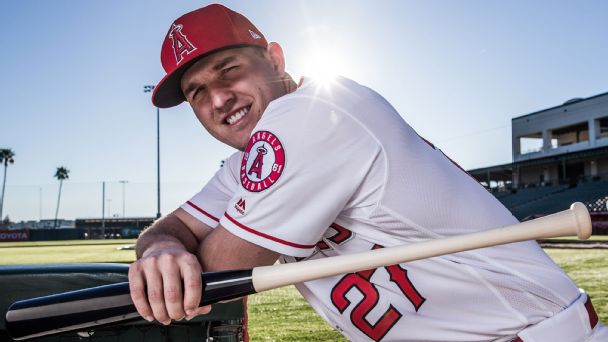 How good would Mike Trout be in Korea's top baseball league? We crunched the numbers. Dan Szymborski

A lot like MLB looked not that long ago actually. Without blazing heat coming in from the mound, hitters attack with a focus on putting the ball in play and strike out far less (batters strike out once per 5.71 plate appearances in the KBO compared to 4.36 in MLB last season) and batting averages are higher (.273 in the KBO to .252 in 2019 MLB). But that's not to say the long ball doesn't exist in South Korea -- it just doesn't occur quite as much as we've gotten used to in the majors.

Add it all up and you get a game with a little more constant action -- balls in play are exciting! -- and you actually see just over a run a game more than we did in MLB last season.

Some of these names are very familiar

No, this isn't Major League Baseball. In fact, it's the equivalent of somewhere between Double-A and Triple-A in terms of the level of play. But there are plenty of players who evoke a "Wait, he's still around?" reaction while you watch.

One of my favorite messages to wake up to in the past two weeks was from a friend declaring "Aaron Altherr is gonna be Eric Thames 2.0" after the Dinos slugger hit one out of the stadium last week. If the name sounds only slightly familiar to you, ask a Phillies fan what they thought the ceiling was for Altherr, the outfielder once nicknamed "The Fresh Prince of Altherr," when he hit 19 home runs in limited action for Philadelphia in 2017.

Nobody in the KBO has a better MLB transaction history than LG Twins ace Casey Kelly. The son of ex-major leaguer Pat Kelly and a former first-round draft pick by the Red Sox, Casey was once the centerpiece of a trade that brought Adrian Gonzalez to Boston from the Padres. You might have heard of another then-prospect in the deal: a young first baseman named Anthony Rizzo.

Former A's/Cubs/Astros/Reds/Marlins/Orioles right-hander Dan Straily is one of the league's elite pitchers. Preston Tucker, brother of Kyle, is one of the league's best hitters. Tyler Saladino is suiting up for the Samsung Lions after playing for the Brewers as recently as last year. Dixon Machado, Warwick Saupold, Ben Lively, Aaron Brooks and Odrisamer Despaigne are some other names you might recognize.

With three foreign players allowed on each KBO roster, and many of those being American players who had a least a cup of coffee in The Show, watching a game is sort of like opening up an old pack of baseball cards and suddenly remembering a player you haven't thought about in years.

While that walk down memory lane is fun, there's a much better reason to watch the KBO: You just might get in on the ground floor on a budding star. Remember what I said about the league being the equivalent of Double- or Triple-A baseball? Well, it's a little more complicated than that. The top players in the KBO can really play; it's just that the depth in the league isn't nearly as good as MLB or even Japan's pro league.

That means if you tune into a game and someone putting up big numbers is hitting in the middle of the lineup, it means he's at least a borderline MLB player in terms of ability.

One name stands out from the rest in that regard: Baek-Ho Kang, a 20-year-old with easy power who is crushing KBO pitching despite being nearly a decade younger than the average player in the league. He's younger than Fernando Tatis Jr. and he's also the reason my wife is sticking with her KT Wiz fandom choice (telling me, "I don't jump ship") despite their 1-7 start.

Kang's age and tools caught the attention of our MLB draft expert Kiley McDaniel, who said Kang would go in the top half of the first round if he were eligible for next month's MLB draft. If you play fantasy baseball, that's stock you buy. If you just want to be able to tell your friends you saw a star player before they did, that's a reason to watch the KT Wiz.

What about the bat flips?

If you heard anything about the KBO before this season, it was probably about the league's epic bat flips. And there's a good reason for that: KBO bat flips are epic. Each is its own work of art and adds flair to a home run in the way slapping the backboard after a dunk or spiking the football after a great catch spices up those games.

But I'll raise you one for all the bat-flip talk. My favorite thing is something I witnessed during Friday's Doosan Bears-Kia Tigers game: a sixth-inning ground ball bat flip. That's right, a Doosan Bears batter flipped his bat after swatting a five-or-so hopper to the shortstop. And it wasn't followed by a bench-clearing brawl, a brushback pitch or a lecture from a veteran player about the right way to play the game. Baseball is supposed to be fun and this kind of expression on the field is really fun.

And what about baseball without fans?

One thing Joon Lee keeps telling me is that we're not getting the full experience because the crowd atmosphere is part of what makes the KBO so much fun. He says it's a mix of going to a rowdy college football, basketball or hockey game combined with the jubilation and cheer of a BTS concert. Yeah, that sounds awesome. When they can start filling the stadiums again, I can't wait to see it.

But for now, the no-fans experience is a pretty good preview of what baseball might look like if MLB can return in front of empty stadiums this summer. And here's the surprising thing: It doesn't seem nearly as strange on TV as you might think.

So much of the TV baseball experience revolves around the center-field camera view in at the pitcher-batter matchup and, especially in the KBO where stadiums have high backstop fences behind the plate, that doesn't look all that different.

Do I miss seeing the crowd go wild after a big play or hearing boos after a missed call? Of course. But after watching a couple of weeks of KBO games, I can confidently say that if games start with no fans in the seats here, watching baseball is still going to feel like watching baseball.

There is one thing missing from the KBO experience so far though. Merchandise! I would love to get my hands on a Dinos hat or a KT Wiz shirt -- and have heard from many others looking for some KBO gear as they watch the games. They're currently nearly impossible to get in the U.S. though -- the KBO says it's working on it -- so if any readers in South Korea want to hook me up, well ... your favorite team's spot in the Power Rankings can't be bought, but a little goodwill never hurts.