Hyun-Jin Ryu won the gold-medal game for South Korea at the 2008 Beijing Olympics. He is the first player to be named KBO Rookie of the Year and MVP in the same season. He is the most successful Korean player to make the jump from the KBO to the major leagues. He is the reason the Los Angeles Dodgers became the first team in Major League Baseball to have every game broadcast in Korean.

He is the first Korean-born pitcher to start both an All-Star Game and a World Series Game. At four years and $80 million, he signed the biggest free-agent deal for a pitcher in Toronto Blue Jays history last winter. In addition -- and he refutes it, but video attests -- he became one of the few KBO pitchers to pimp his bat in an MLB game after hitting his first career home run.

With MLB on hiatus during the coronavirus pandemic, the most accomplished Korean player in major league history and one the most recognized celebrities in his home country, Hyun-Jin Ryu, is now sitting at home watching the KBO.

And according to him? So should you.

"American-style baseball revolves around power, home runs, slugging percentage. Korean baseball is more based on your on-base percentage, closer to traditional baseball," Ryu told ESPN through a translator from his spring training home in Florida. "They play sound fundamentals, are contact-focused. It doesn't matter what part of the lineup you are, if you need to bunt, you bunt. It's more classic baseball versus current MLB baseball, which is power-focused."

And while the KBO remains one of the few professional sports leagues to have returned to action, they had to do so without one of their primary assets -- their fans. Ryu deems KBO fans a vital part of what he referred to as the singular "pageantry" of Korean baseball. 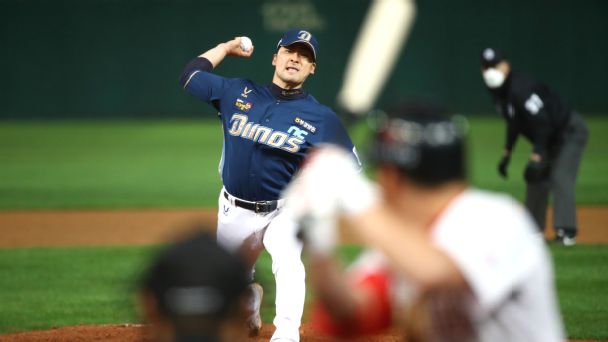 Power Rankings, power surges and a drive-off home run. Here's what you need to know this week in the Korea Baseball Organization. KBO Weekly

How to watch and ESPN schedule

"Korean fans are fanatical. It's a celebration, a big party!" he explained. "Every game is a celebration, regardless of whether you're winning or losing. The fans are there to cheer you on, no matter what. They don't boo because it's a sign of disrespect. During baseball games, people in in America just sit around. In KBO, you can stand up for an entire game. And it's really, really loud."

An All-Star every year in seven seasons with the Hanwha Eagles, Ryu became one of the KBO's most dominant starting pitchers.

Ryu joined Hanwha as its second overall draft pick out of high school in 2006 and went on to become one of the greatest stars in franchise history, so revered that no Eagles player has worn his No. 99 since he signed a six-year, $36 million deal with the Dodgers in 2012.

TVN, a South Korean network under the CJ E&M umbrella, the mass media and entertainment empire behind the Oscar-winning Korean-language megahit "Parasite," just wrapped up extensive filming after following Ryu's every move for an upcoming documentary on his career accomplishments. The envisioned four-part feature has a working title of "Monster," Ryu's Korean nickname, which he wore on the back of his jersey during 2019 Players' Weekend, and stems from being considered a "monster pitcher."

He remains close to many of his former teammates and coaches in the KBO, particularly Kim In-sik, Ryu's first manager at Hanwha and skipper of the Korean 2009 World Baseball Classic silver medal-winning team. Kim even officiated Ryu's lavish January 2018 wedding to TV sports announcer Bae Ji-hyun, who gave birth on Sunday to the couple's first child, a girl named Lucy.

Since joining the league in 1996, the Eagles have won only one Korean Series championship, back in 1999, but they've finished as runners-up five times, most recently in 2006. Ryu believes they have the goods to get back into championship contention.

How to become a KBO die-hard 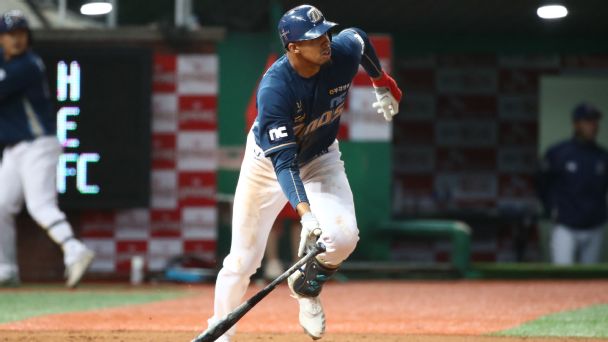 Bat flips after ground balls. Dinos vs. Wiz trash talk. And an endless search for fresh merchandise. Here's what it's like jumping on the KBO bandwagon. Dan Mullen

As Ryu envisaged, the Eagles' pitching has been solid so far this season, but they currently have one of the lowest-ranking offenses in the 10-team league. They're in eighth place (6-9) after a slow start in the 144-game season.

Arenado: 'I miss baseball every day'

The Rockies star shares what his game days were like, but how he has to spend them now during a pandemic. Story »

Seeing KBO games broadcast on national television in the United States has been a great source of pride for Ryu, who credits his seven years of playing Korean professional baseball as indispensable to his success in the majors. With a 2.98 career ERA in MLB, Ryu is currently the only pitcher born in an Asian country with a sub-3.00 career ERA (minimum of 500 innings pitched) in major league history.

"KBO has a very disciplined structure. There's a lot of focus on teamwork, in terms of adhering to the team standards versus self," he explained. "Coaches in the KBO, especially in Hanwha, taught me to be very disciplined; it made me mentally stronger. They gave me confidence to pitch at the most elite level. I was taught discipline and the mental aspects of the game. But mostly, being in the KBO taught me responsibility, and that has been fundamental in my career."

And in case you were wondering, even as a pitcher, he has no issues with the renowned flamboyance of KBO bat flips.