The 2020 Major League Baseball season was going to be remarkable from the get-go for a number of proposed rule changes. Now that we're more than a quarter of the way through the season, we have a sense of how much these new rules have had an impact on the game. With that in mind, we checked in with three of ESPN.com's baseball insiders -- Bradford Doolittle, Sam Miller and David Schoenfield -- to give us their reads on how these rules are working so far, and whether we should keep them or chuck them into history's dustbin.

Extra innings runner on base rule

Bradford Doolittle: It's a gimmick, and it's not the way major league games should be decided. I understand that so far, the rule has been popular. But the message the reaction sends is being misinterpreted. What I get from it is that what people like about it is that the rule forces teams to (mostly) think beyond playing for the home run. The strategies that come into play when an inning starts with a runner already on second base are ... just baseball, in the way that we've mostly known it up to the past few years.

People like a diversity of strategy, and while home runs have their appeal, they can't be the only on-field offering baseball features. Address the over-incentivization of home runs, and the practice of carrying too many pitchers, and you have a better balanced and nuanced game and this silly gimmick is not needed. And as for using it as a game-shortening measure, it's a ham-handed and misguided way of dealing with what is the real underlying problem.

Miller: Every half-inning goes in terrifyingly unpredictable, dynamic directions, flowering into unanticipated strategic dilemmas and wild swings in win expectancy with nearly every play. And the fan has some faith that the viewing experience will deliver what it promised -- a victor -- at a reasonable hour.

David Schoenfield: While the one or two games every year that go 17 or 18 innings are always fun, I think the idea of a long extra-inning game is actually more exciting than the actual product. If a game goes that long, it's usually because nothing is happening. Indeed, the collective batting average in extra innings last year was .233, the lowest of any inning. The collective slugging percentage was .394, the lowest of any inning. Now we have instant excitement and strategic options with the runner on second base. In fact, this rule is helping keep the sacrifice bunt from complete extinction. There have been just 20 sac bunts all season through Sunday, with six of those coming in extra innings.

Last season, 91 of 208 extra-inning games went 10 innings (43.8%). It's a small sample size with just 16 extra-inning games through Monday, but nine of those (56.3%) were over after 10 innings and another five were over after 11 innings -- so that's 87.5% of extra-inning games over after 11 innings compared to 71.6% last year. So, games are ending a little quicker, and of course the marathon games are unlikely (we've had two 13-inning games). But it's not a HUGE difference. The biggest impact might be the elimination of the marathon games, which can wipe out an entire bullpen in one night and have a potential ripple effect for several days thereafter (including forcing a team to send a player to the minors for no other reason than to get a fresh arm up).

Based on early returns, the new rule has shortened the length of extra-inning games while increasing the prevalence of scoring and deemphasizing all-or-nothing approaches. The average number of extra innings in games tied after nine frames has dropped from 2.14 to 1.57 over last season, while the runs-per-nine total has skyrocketed from 4.26 to 8.43. (Though, because runs scored by the free baserunner are unearned, extra-inning ERA has actually declined.) There has also been an increase in elective strategy. On a per-nine-innings basis in extra innings, steals have gone from 0.62 to 1.08, successful sacrifices have gone from 0.35 to 1.08 and intentional walks have gone from 0.85 to 1.43. Meanwhile, homers per nine innings during extra innings have dropped from 1.30 to 0.36. Through Monday, there had been as many extra-inning triples (two) as homers.

Verdict: Keep it or lose it?

Doolittle: My subjective view is that baseball is a better game without the designated hitter. Others disagree. We had a system where both versions of the game were offered. While there are minor competitive issues with having leagues with different rules, that is outweighed by the preference for traditional rules by fans of the National League game.

How real are your team's playoff hopes in a season that's already racing by? Here are our updated win forecasts and 16-team playoff odds for all 30 teams. MLB Stock Watch (ESPN+) »

People get peevish about watching noncompetitive pitcher at-bats, but that's a complaint about the noncompetitive pitcher, not a problem with the game. Pitchers who put in the work to contribute at the plate gain a deserved edge when going against those who don't. And, sure, even the best-hitting pitchers generally don't hit as well as a DH (though so far in 2020, DHs are hitting an aggregate .217), but they aren't judged by how they hit in comparison to position players. They are judged in comparison to other pitchers.

It's an aesthetic issue, and while I haven't seen any recent numbers, I highly suspect that NL fans overwhelmingly oppose the DH. Should that not count for something?

Miller: I barely notice it. Back in the old days, when a lot of people watched only NL games or only AL games, it might have been jarring. But nowadays I switch among a half-dozen games in any given evening, some of which had DH, some of which didn't, some of which had NL teams playing with DHs when it was an interleague game. What's a few more?

If this sticks around for good, I'll feel a pang of nostalgia some years down the road as I grow to miss the weird details of pitchers batting. For now, I notice nothing missing, nor consciously notice anything added.

Schoenfield: I've leaned slightly pro DH in recent years, mostly because I think it's a little ridiculous that you have different rule sets for different games. I also enjoy, however, that the NL game is a little harder to manage and it forces the NL manager to deploy his bench more than an AL manager. But this one is pretty easy: Has anybody missed watching pitchers hit? No. Don't lie.

Verdict. Keep it or lose it?

Miller: Lose it, but I say that with the least possible emotion, and with the certainty that the world is moving toward it inevitably.

Doolittle: This one I'm more tepid about, as opposed to the love/hate dichotomy. I do think that mid-inning pitching changes slow the game down at just the wrong time and don't really add much, even strategically. There is every bit as much strategy with this new rule as there was before. However, the underlying problem -- excessive and largely unnecessary pitching changes that kill the flow of action -- could be addressed in ways that have additional benefits.

Early Takeaways For All 30 Teams 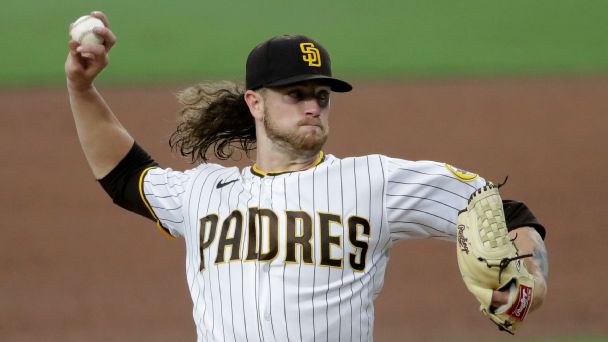 Not sure what to make of your team's early results? Kiley McDaniel goes deep on what stands out so far.

My preference would simply be to limit the number of pitchers a team could have on the roster, and limit how often the roster could be changed. This would force teams to stop the reliever shuttle and get more out of each individual hurler. You might have an additional restriction that says you can have one mid-inning pitching change per game. Those measures, I think, would have more of an impact than this one, which addresses a practice that was well on the way to being outmoded anyway.

Miller: To me, the key thing so far is that it hasn't eliminated lefty specialists, so much as it has led to lefty specialists facing righty sluggers. That mismatch is wonderful entertainment: A major leaguer whose weakness is fully exposed, who is barely qualified for what he's being asked to do, in a high-leverage moment, has to somehow make it through. This has been especially cool in tandem with the extra-inning rules. With the go-ahead runner in scoring position and the middle of the order often coming up, teams have had to hand whole innings over to pitchers instead of slowing everything down with lefty-righty-lefty sequences.

Schoenfield: I always come back to this: If you were designing baseball from scratch, nobody would think, "Hey, you know what's a great idea, let's allow three different pitchers to face three different batters, and they have to run in from the bullpen, and then warm up, and then he throws two pitches, and the next guy comes in from the bullpen, and HE has to warm up, and he throws five pitches, and then ..."

Now, I also understand that a manager should be able to use whatever pitcher he wants in whatever situation, so I'm a little torn, but from an entertainment perspective, this does speed the game up a little. Now, about that pitch clock ...

Thus far, lefties have thrown 25% of all relief innings, down the slimmest bit from last year's 26%. This is more or less what we hypothesized from studying last year's lefty usage. The four pitchers who threw the most now-outlawed types of appearances last year -- Andrew Chafin, Alex Claudio, Adam Kolarek and Oliver Perez -- are still employed and pitching regularly, and have collectively been about as effective as they were last year. So not much change for them. Unfortunately, not much change for the league's pace of play, either. The average time of a nine-inning game this year is three hours and five minutes, same as last year, tied for the slowest in history.

Verdict: Keep it or lose it?

Doolittle: Of all these rules, this one is most starkly not major league. While it's true that in early baseball history doubleheaders would sometimes get trimmed, 21st-century clubs are built for nine-inning games and anything less than that feels incomplete. For 2020, it's a necessary evil, on that much we can agree. Beyond that, adopting this format for doubleheaders because games are too long or too many pitchers are needed would be an extremely ham-handed way to deal with the underlying issues.