With the 2020 MLB season hitting the home stretch (already!), ESPN has a Sunday doubleheader with four teams hoping to make some noise in October. The Giants and A's get things going at 4 p.m. ET, followed by Twins-Cubs at 7 p.m. ET.

To get you ready for the twin bill, we asked national baseball reporters David Schoenfield and Jesse Rogers some key questions about the teams.

The Oakland Athletics haven't advanced in the playoffs since 2006. Will they break that slump this year?

Jesse Rogers: Not if they play the Cleveland Indians in the first round. The A's starters are good but none give you that scare the Indians can throw at you. Cleveland has its own issues, which might show up in a longer series. But shutting down an offense for two games? That should be Cleveland's specialty this postseason.

David Schoenfield: The good news is that after three straight losses in the wild-card game (2014, 2018, 2019) the A's will at least get a best-of-three opportunity this time. The strength of the team is the bullpen, which isn't the worst thing to have going for you in a short series. Manager Bob Melvin would have quick hooks for his starters and rely on his relievers. As of now, the A's would actually play the Astros in the first round and they've gone 7-3 against Houston. Those games have been extremely low scoring, with the A's averaging just 3.8 runs per game and Houston 2.5.

I'll say A's over Astros, but I'm with Jesse if they meet Cleveland, I'll go with the Indians shutting an Oakland offense that will be without Matt Chapman and has seen Marcus Semien and Matt Olson fail to replicate their 2019 production.

How are the Chicago Cubs doing as well as they are with Javier Baez, Anthony Rizzo, Kris Bryant and Kyle Schwarber all hitting around .200?

From the games that matter most to what the matchups would be if the season ended today, we get you ready for baseball's wild sprint to the finish. MLB Playoff Push »

Rogers: Pitching. Just like the Indians, the Cubs have been fueled by the top end of their rotation as well as an improving bullpen. There isn't a need to look deeper than Yu Darvish (Whose return to dominance I profiled here), Kyle Hendricks and 'no-hit' Alec Mills as a good part of the reason the Cubs are in first place despite some down years by their stars.

Schoenfield: The Cubs haven't hit -- but nobody has in the NL Central. Are they using balls left over from 2014 in that division or something? Entering the weekend, the Cubs actually rank 17th in the majors in wOBA, which isn't great, but is still the best in the division. Ian Happ, Jason Heyward and Jason Kipnis have helped to make the offense respectable and the pitching/defense entered the weekend allowing the second fewest runs per game in the NL, behind only the Dodgers.

Which of the two teams -- the Twins or the Cubs -- will last longer in the playoffs? 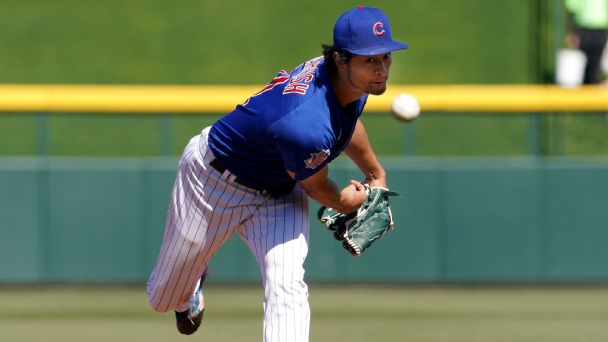 Here's how a heated discussion with his pitching coach and some advice from Trevor Bauer helped the Cubs righty rediscover his best form.
Jesse Rogers »

Schoenfield: Well, it looks like the Twins are pretty much locked in to face the Yankees in the first round, it's just a matter of where that series will be played. The Twins, of course, are riding a seemingly impossible streak of 16 consecutive postseason defeats going back to the 2004 Division Series. Thirteen of those losses have come against the Yankees. You can't really say the Yankees are in their heads because these have been different groups of Minnesota players, but it's fair to venture that the Twins would probably rather face anybody else in the first round. When they met last season, the Twins' rotation was on fumes because of injuries and they're in better shape this year with Kenta Maeda having a terrific season. In fact, dare I suggest the Twins do this: Skip Maeda in Game 1 and use Randy Dobnak or a bullpen game against Gerrit Cole and then go Maeda in Game 2 and Jose Berrios in Game 3?

(So my answer is the Cubs will last longer.)

Rogers: Neither. They'll both go out after the first round.

Schoenfield: Ahh, Jesse, you underrated the Cubs. The bottom of the NL is terrible. They're going to play the Giants or Marlins or Reds or Phillies; I'll take the Cubs over any of those teams, although Darvish's postseason history is, umm, a pause for concern.