I check all of the boxes.

I played nine seasons in the big leagues with the Philadelphia Phillies, Chicago Cubs and Texas Rangers.

I have experience as an executive subcommittee member in the Major League Baseball Players Association and am well-versed in baseball governance.

I have an Ivy League degree at a time when that means a lot for executive opportunity in baseball.

I've been a candidate before, and I believe I have the voice and drive to be an excellent major league manager.

But I can't be your candidate right now.

That truth has a lot to do with another box I check: Black father.

As is the case with any potential manager who has young children, the stress of considering a position that keeps you away from home is real. The significance of missing major milestones in their lives and the guilt of putting so much on your spouse makes even the greatest job a compromise.

But as a Black father in 2021, this compromise becomes a deal-breaker for me.

How can I leave my children for extended periods of time when, every day, the poison of racism makes me fear for their safety?

The past year has been one of racial reckoning in America. But in the Black experience, much of what we saw was business as usual. It's been a year that has given us even more indisputable evidence of systemic racism, sometimes stark brutality caught on camera -- and most of my four kids, all under 13, are of an age to pay close attention.

Appreciating that I have the privilege to make this choice, I want to be present as much as I can as they ask probing questions about this reality. It matters to me that I can share firsthand experience to help them understand, but I still want them to retain hope. Even as the children of a former big leaguer, the advantages that come with that do not make them immune. Those advantages also make it important to teach them to embrace empathy for others, and show determination in the face of hate.

I knew what it meant to be a Black man in America well before I was a parent, before I found out that shoveling my own driveway involves risk, that buying a house brings the potential of lowering property values, that signing up my kids for an education involves countering forces that erode their self-esteem -- when schools are still largely segregated and security officers are summoned disproportionately to deal with Black students. But knowing these things now, how can I leave all that at the door? 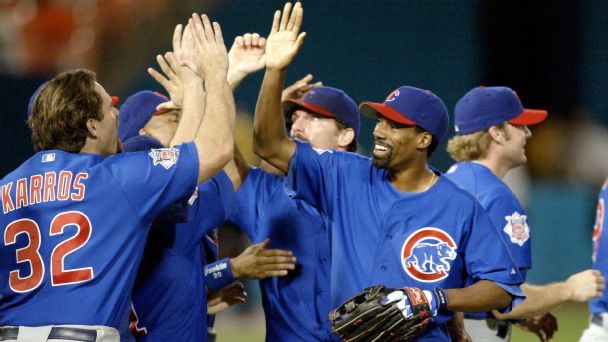 • More from The Undefeated

In late 2014, I knew I entered my interview with the Tampa Bay Rays as a long shot to become their next manager. The Rays brought in what must have been the most diverse field of candidates in history. Meanwhile, back in Black life, it was just a few months before a law was enacted in Connecticut to address an encounter I had with a police officer in my very own driveway.

On a snowy day, I went out to shovel when an officer from another township parked across the street and eventually approached me. He rudely asked if I was shoveling "other people's driveways" to make "some extra bucks." I told him it was my home. When he finally left, after making a sarcastic remark, I stood there, feeling robbed of my dignity and my rights on my own property. It took 18 months of my life, countless meetings, community engagement and a few sit-downs with my family to achieve restorative justice. The "Glanville Law" was born, reminding officers that you cannot cross town lines and enforce the municipal laws of a different town. My kids were watching.

I didn't get the Rays job, which even then I was nervous about taking. The following year, I landed in Los Angeles after midnight, and when I went to get a cab with my white colleague, the cab driver saw me and told me to "go take the bus, it is $19." He refused to drive me to my hotel. When police did a sting to see how often this happened at LAX, the first night it happened to 30% of Black undercover riders. We're talking about one of the most diverse airports in the world.

My son noted a pattern: "Every time these bad things happen to you," he said, "it seems to be because of your color."

I have made my way in sports media, which I enjoy immensely. Still, I don't take my decision not to actively pursue a managing job at this time lightly. I am grateful for the inquiries I have received over the years, not just for my future, but because I could be part of the league's effort to rectify a legacy of inequity. It is a critical time as our country still sorts through its pain, underscored by the killing of George Floyd. I want to believe that being in that manager's office is an opportunity to shape the culture, to welcome others who have been othered, to be representative, to see talent through unique eyes, to unearth winning outside of traditional bias.

Baseball's front offices have embraced analytics in the 21st century. Diversity? Not so much. Joon Lee »

But this path is no guarantee. A great mentor, Dusty Baker, has had an incredibly successful career by any standard, approaching 2,000 wins and managing against the tides as a Black leader. Yet, he's also lost jobs after making the playoffs and winning 90-plus games. In one case, he had to wait until a white candidate rejected a position because of a lowball offer. Most recently, jobless for two years after winning 97 games, one of the most iconic Black managers in history was asked to clean up the mess after a once-in-a-century scandal in Houston. Being Black, you pay attention to how your legacy representatives are treated. Especially when more Dusty Bakers are needed in the game -- not fewer.

After the Selig Rule, a policy that mandates teams consider minority candidates, was introduced in 1999, teams quietly began to remove previous managerial experience as a requirement. Analytics became a big driver in hiring. Long struggling for a fair shake, Black candidates were initially told they needed extensive managerial experience to get in the interview room. Then, in the second decade of the Selig Rule, 11 white candidates were hired without any previous professional coaching or managerial experience. In one case, a team filled its open managerial job by pulling from its front office, handing its general manager a field position instead of hiring an experienced candidate. Yes, many of the above were respected players, and they collectively had a lot of success, but still that could not explain the absence of color. In every single facet of a Black person's life, the rules change as soon as you get on line.

The recent events in Washington, D.C., only crystallized what I already knew, that our country has two competing stories, and at the center of those stories is power and race. It's hard to address my children's questions about why, in this moment, a predominantly white mob would garner such favoritism relative to a peaceful Black assembly in the same place. To see the dual interpretations of threat play out before your eyes, reveals and stirs that sense of inequity. It was hard not to be afraid for the future because of how much this untethered terror reminded me of the worst of our past.

I believe I'd be a success in the dugout. Yet I have this horrible feeling about walking out the door for a year and not being there to help my kids navigate these kinds of moments.

Glanville on the ESPN Daily podcast

While there is tremendous progress in certain areas -- progress we must fight to help sustain -- I would grapple with being an absentee Black father for a full big league season. I realize that so many committed parents find careers in the game of baseball. They make it work, they combine the two worlds. They endure for the privilege of working in a sport they love. I have a great appreciation for how they do it.

But if we truly value diversity, it has to be reflected more than through a sprinkling of people of color in the chairs of power. We have to do more than post Black Lives Matters signs. We have to learn from the story of these diverse candidates and understand what they face every day, as many of them, like me, prepare their children to face white supremacy being given its biggest hall pass in generations.

Despite the progress we have made, the worst of what we are seeing today is who we are too. It exists everywhere, even in baseball. The many times I was told an experience with racism was a figment of my imagination, now has a face, and apparently a gun, for the world to see. Am I safe? Are my kids?

As long as I have those existential questions, particularly while my kids are young, I will be a hesitant candidate. Admitting that, I wouldn't fault anyone for not considering me. But I still believe the game can help make the world better -- for all of our children -- even as I choose to cheer from afar.