When I first reached out to Henry Aaron to tell him I was interested in writing a book about his life, he did not want to talk to me. He was convinced the public had no interest in him, except to have him serve as their proxy to criticize Barry Bonds as Bonds neared his all-time home run record. Henry's titanic statistical achievements cemented, he was tired of the constant misinterpretation of his worldview. The journalistic response to his critique of race relations had turned him inward. In print, he saw himself portrayed as bitter, always bitter, when in fact he was merely telling the story of his life -- answering the questions he was asked. When we first spoke, he was resigned to the idea that people did not want to really know him. Instead, they wanted him to reflect a sense of their own better selves. His perspective of his greatest moment -- breaking Babe Ruth's all-time home run record -- was somehow less important than theirs, and his view that the greatest moment of his career finally ended the worst period of his athletic life complicated their enjoyment that the night of April 8, 1974, brought them. The public reduced the effects of his own journey to him simply being bitter without cause. 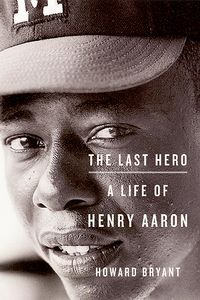 Henry's critique was central to his life, and the critique was a simultaneously gentle yet ferocious indictment. Over the course of his 86 years, America asked him to do everything right. It asked him to pull himself up by his bootstraps: Henry's father had built the family house with saved money and leftover planks of wood and nails he scavenged from vacant lots around the Toulminville section of Mobile, while he had taught himself to play baseball. America asked him to put in the hours and the hard work and to not complain: Henry played 23 seasons and never once went on the then-disabled list after his rookie season ended three weeks early because of a broken ankle. No special favors. No handouts. America asked him to believe in meritocracy, the meritocracy of the record books and the scoreboard.

America asked him to do all of the things, and when he did them, he found himself at the top of his nation's greatest sporting profession through the merit of statistics. In return, the FBI told him his daughter was the target of a kidnapping plot. For nearly three years he required a police escort and an FBI detail for himself and his family. He finished the 1973 season with 713 home runs -- one shy of tying Ruth's record -- and believed he would be assassinated in the offseason. He had received enough letters to convince him so. He received death threats from 1972 to 1974 -- all for doing what America asked of him.

He was unconvinced a writer would take him seriously, because over his lifetime precious few had. As he seemed to warm to the idea -- or at least not view it hostilely -- he asked me a question I would never forget: "How many pages will it be?" It seemed so odd -- yet the question was self-explanatory and my response would telegraph to him how seriously I took the project. Biographies of towering figures in the classically grand tradition are thick. They are doorstops. They are meaty paperweights that sit on the bookshelves whose girth scream importance -- even if 95% of the population never finishes them, even if I was thinking, "Mr. Aaron, the only thing worse than writing a lousy book is writing a really long, lousy book." To him, big people got big books, and because he did not yet have one, he did not think people cared. Henry wanted to make sure I was willing to put in the work to understand a life.

He possessed an uncommon decency, a quality in short supply today. His decency convinced him no one was interested in him, not because he did not believe his life was important, but because he was not an anti-hero whose deep flaws, scandal and misdeeds made him more marketable. He was just a solid person. No jail. No arrests. No substance abuse, falls from grace, or mistresses.

Henry understood at once his place in the world and how his talent had created a different lane for him. The people who once dismissed him, and his people, made exceptions for him because he was The Hank Aaron. He was rightfully distrusting of them. He watched the change in how America viewed him as his talent kept proving its cultural racism wrong. And instead of his constant defeat of its presuppositions, the culture did not change, but in its eyes, he did. Henry became dignified.

In the African American story, dignity is such a sly and deceptive word, simultaneously complimentary and condescending, and dignity was attached to Henry like a surname. Its affixation to him, of course, said more about his world than it ever did about him. For what was called dignity was simply an acceptable response to hostility, and it was easier for writers and broadcasters, fans and executives to concentrate on his response to hostility than the hostility itself. It is a common expectation of African Americans that they be more conciliatory and not vengeful, invested and not apathetic, constantly brave and aspiring and dignified in the hostile territory of indignity. When he smiled at the hostility, he was dignified. When he did not, he was bitter. Dignity has always felt like code for treating white incivility as inevitable behavior, of not ever punching the punchers.

His life seemed to mimic his career, a long, triumphant marathon where in the end his values proved sturdier than the temporary sensations of the moment. And through all the years -- like hitting 20 home runs for 20 straight years -- he was still there.

There was a hidden fear I felt for my own family that I also felt for him: the worry that Black people in their 80s and 90s would die before the 2020 election, and during the last part of their lives they would bear witness to both the elation of an African American president and a hostile response so severe it was reminiscent of the previous backlashes to Black success. I was with Henry at his house in Atlanta on Oct. 1, 2008. After we had finished talking, he and his wife, Billye, were heading to the polls to vote early for Barack Obama, the act of doing so its own statement. Her first husband was the late civil rights activist and Morehouse College professor Dr. Samuel Woodrow Williams, and before his death in 1970, Billye had long been part of the Atlanta civil rights movement. The Braves moved to Atlanta after the 1965 season, and Henry met with Andrew Young, Ralph Abernathy and Martin Luther King, Jr., and told them he did not believe he was sufficiently doing his part in the movement. King and Young assured him that as a Black pro sports star in the South, his role was significant. To cast a presidential ballot for a Black man 42 years later was for them a major emotional event.

When Henry and I last saw each other, in Atlanta in early 2018, this -- along with tennis ("Do you think Serena will get another one?" he asked) and the NFL playoffs -- is what we talked about. And he reminded me of his father working at the Mobile shipyard during World War II, when white workers rioted because African Americans were being hired, taking what they believed was theirs and theirs only. Henry was dignified, but he never forgot what was done to his people and by whom.

He never mentioned not surviving the vicious presidency of the past four years, but I worried about it for him, as I did for all the Black people of his generation for whom the vote was something some had literally died for -- a vote that today was being strategically suppressed and delegitimized. When I wished him a Happy New Year a few weeks ago, he was grateful for surviving, and excited for Georgia. What he saw in the country reminded him of where it had been, of how deeply the past had wounded him, and he feared seeing the past in the future. We talked about losing Joe Morgan and Jimmy Wynn, Tom Seaver and Whitey Ford and Bob Gibson and Lou Brock and Al Kaline with pain and absolutely no hints that day that he and I would never speak again.

Before we hung up the phone, he said what he always said, "Call, any time. I love when we talk," and I said I would, but I also knew the truth: I never called him nearly enough because he was the great man, Henry Aaron, and one does not respect an invitation by overstaying one's welcome. Now, that time cannot be recovered.

When he was behind Ruth, he was ahead of America. When he passed Ruth, America still had not caught up to him -- and now, respected as royalty, I asked him if there was ever a quiet moment when he could sit back with an umbrella in his drink and revel in triumph, that he indeed had made it. He said yes so many times, delighted in the happiness he had not felt in 1974, making bitterness the inappropriate adjective it always had been. He challenged baseball and had reconciled with it. He was an unquestioned immortal, no longer slighted. Jeff Idelson, former president of the National Baseball Hall of Fame and Museum, saw to that, as did his friend and former baseball commissioner, Bud Selig, who made it clear to all underlings at MLB that Henry was a made man, not to be harassed. President George W. Bush awarded him the Presidential Medal of Freedom.

In 2009, Henry, his wife, Billye, and I were sitting in a conference room at the Hall of Fame in Cooperstown. I was trying to comprehend the historical arc of Henry Aaron, and told him he represented so much of the Black American aspirational journey. I said to him, "You went from your mother hiding you under the bed when the Klan marched down your street as a toddler to sleeping in the White House as the invited guests of the president."