John Means was almost perfect for the Baltimore Orioles on Wednesday, but he will happily settle for a no-hitter and one of the greatest pitching performances in team history.

Means retired all 27 batters he faced in a 6-0 victory over the Mariners at T-Mobile Park in Seattle, but he did allow a baserunner when Sam Haggerty reached on a third-strike wild pitch in the third inning. The Orioles then caught Haggerty attempting to steal second base, but the wild pitch nullifies the perfect game bid.

Means is believed to be the first pitcher in major league history to lose a perfect game on a third-strike wild pitch. According to Elias Sports Bureau research, he is the first pitcher to throw a non-perfect no-hitter with no walks, no hit batters and no errors.

John Means is the first Orioles pitcher to throw an individual no-hitter since Jim Palmer in 1969.

That snaps the longest active streak without an individual no-hitter among current franchises.

"To be honest, I can't even put it into words right now. I felt OK all game, didn't really have a changeup until the end, but glad I got it going," Means said in the postgame interview with MASN.

Means later told SportsCenter that he was not disappointed to miss out on perfection.

"Yeah, right now it doesn't matter at all to be honest with you," he told ESPN. "I was just happy I made a good pitch, I was struggling with the curveball recently, so I was just happy I got it over and got a swing and miss on it, so that is all I was happy about. I was just trying to keep my cool with him on first base. I'm glad Sevy (catcher Pedro Severino) made up for it by getting him out at second."

Means had never pitched more than seven innings in a game, but he had the Mariners confused all day with his arsenal of a low-90s mph sinker, a curveball and a terrific changeup. He struck out 12 and induced 26 swings and misses. He threw first-pitch strikes to a remarkable 26 of the 27 batters he faced -- the highest percentage of first-pitch strikes in a complete game in the pitch-tracking era (since 1988).

Means said his biggest pitch on Wednesday was his inside fastball.

"I have to be able to do that to get the changeup working. Sevvy (catcher Pedro Severino) called a great game. Those fastballs saved me," he said.

The closest ball to a hit was J.P. Crawford's flare to center field with two outs in the sixth inning, but Cedric Mullins made a sliding grab. That blooper had a chance to drop with a .480 expected batting average via Statcast measurements, but Mullins got a good jump and handled it easily.

Kyle Lewis flew out to the warning track in left field leading off the bottom of the eighth, and the only hard-hit ball -- a ball hit at 95 mph or higher -- was a routine infield pop-up. Means entered the ninth inning at 101 pitches. He got Dylan Moore to pop up to third base on a 2-2 changeup, struck out Haggerty on another changeup, then got Crawford on a soft liner to shortstop for the 113-pitch no-hitter. 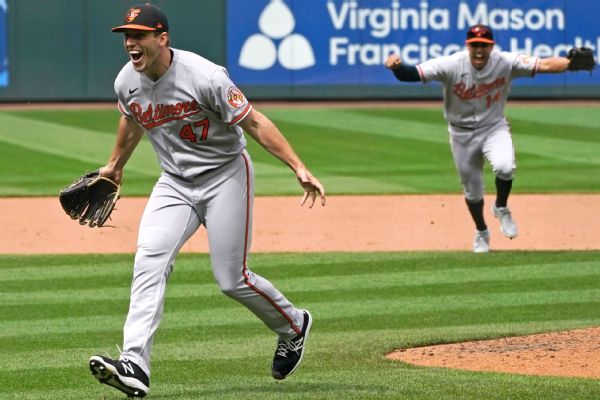 • Didn't have any college offers out of high school
• Drafted by the Braves in the 46th round in 2011 (that round no longer exists)
• High school teammates with Bubba Starling, the 3rd overall pick in 2011 (he ended up beating Starling to the majors)
• Threw a no-hitter with Low-A Delmarva in 2015
• Younger brother Jake selected by Royals in 22nd round of 2019 draft
• Wife Caroline a former professional soccer player

"Really can't put into words what the last three outs, seeing how the teammates embraced him,'' Baltimore manager Brandon Hyde said. "Our your clubhouse after the game it was like we clinched a playoff spot.''

Means said he'll be thinking of his wife, Caroline, son, McCoy, and mother on the flight back to Baltimore. He said his father, Alan, who died last year after receiving treatment for pancreatic cancer, was with him on Wednesday.

"I know my dad was back there today, telling me what pitch to throw," he told MASN.

Means finished with a game score of 99, the highest in Orioles history for a nine-inning game. Erik Bedard and Mike Mussina shared the record at 98, both in 15-strikeout shutouts. Means improved to 4-0 with a 1.37 ERA in 2021.

Means' no-hitter is already the third this season. The San Diego Padres' Joe Musgrove (against the Texas Rangers on April 9) and the Chicago White Sox's Carlos Rodon (against the Cleveland Indians on April 14) also have achieved the feat this season.

It's the first time since 1969 there have been three complete game no-hitters this early in the season.