Baseball will return to the Olympics this summer in Tokyo for the first time since 2008 as a six-team tournament, with four nations already qualified: Japan, South Korea, Mexico and Israel. The United States is attempting to become one of the other two countries in the Olympic tournament if it can win the Baseball Americas Qualifier, taking place in Florida through June 5, with all games available on ESPN+ including Tuesday's 7 p.m. ET matchup with the Dominican Republic. The U.S. opened play with a 7-1 win against Nicaragua.

Before we get to some of the players to watch in the qualifier, the rules of the tournament:

Despite the non-40-man limitation, the U.S. team, managed by Mike Scioscia, does include several interesting prospects to go with a slate of former major leaguers and rates as the heavy favorite to advance to Tokyo (although the U.S. was also the favorite at the Premier12 qualifying tournament in November 2019 when Mexico pulled off the upset):

The road to the 🥇 starts NOW #ForGlory🇺🇸

Ready to get after it at the @WBSC Americas Qualifier with this squad 💪 #RoadToTokyo | 🔗: https://t.co/hgkzlpwnGd pic.twitter.com/6tQklnZ7WO

Let's look at some of the key players, starting with the prospects:

Triston Casas, 1B, Red Sox: The highest-rated prospect on the roster from Kiley McDaniel's preseason top 100 at No. 52, Casas is built like an NFL tight end with big power from the left side. He's off to a strong start at Double-A Portland, hitting .328/.400/.552 with four home runs.

Matthew Liberatore, LHP, Cardinals: Many thought the Rays got a steal when Liberatore fell to the 16th pick in the 2018 draft, and he had a fine 2019 season in Class A, but the Rays traded him to St. Louis in the Randy Arozarena trade. No. 80 on McDaniel's top 100, Liberatore is 0-3 with a 5.48 ERA at Triple-A Memphis, although he has pitched better than the ERA indicates. He relies on a low-90s sinker and plus curveball and could see the majors at some point in 2021.

Simeon Woods Richardson, RHP, Blue Jays: No. 90 on the preseason top 100, Woods Richardson was the Mets' second-round pick out of a Texas high school in 2018, and then included in the Marcus Stroman trade with the Blue Jays in 2019. Just 17 when drafted, he's still just 20 and pitching in Double-A, where he has allowed 14 hits in 19 innings with 31 strikeouts and eight walks. With three plus pitches and command, he's on the fast track to the majors, although he's not yet on the 40-man roster.

Jarren Duran, CF, Red Sox: Duran didn't crack the top 100, but he might now, given the power he has showcased early on in Triple-A, hitting .278/.366/.625. His seven home runs in 2021 are already more than the five he hit in 132 games in the minors in 2019, when he hit .303 with 46 stolen bases. Given Boston's outfield situation, if he keeps hitting, he may be playing in Fenway later this summer rather than Tokyo if the U.S. qualifies.

Joe Ryan, RHP, Rays: A seventh-round pick out of Cal State Stanislaus in 2018, Ryan dominated the minors with a mid-90s high-spin fastball in 2019, striking out 183 in 123.2 innings. He's at Triple-A Durham, where he has 32 strikeouts and six walks in 21.2 innings. The Rays have a crowded 40-man roster and Ryan isn't on it yet, but it's not inconceivable that he could come up later this summer, probably helping out as multi-inning weapon in the bullpen.

Now, some of the more recognizable names:

Matt Kemp: The former MVP runner-up was actually an All-Star as recently as 2018, but he hit .200 in 20 games for the Reds in 2019 and was a part-time DH for the Rockies in 2020. Kemp didn't receive any invite to spring training this year, so it looks like his MLB career is probably over. He should get at-bats at DH.

Todd Frazier: The 11-year veteran hit .086 in 35 at-bats for the Pirates this season before Pittsburgh designated him for assignment earlier in May. Frazier has played for Team USA on the collegiate national team in 2006 and as part of the Pan American Games in 2010.

Jon Jay: Another player with 2021 major league experience, the 36-year-old hit .357 in five games for the Angels before they designated him for assignment on May 14. He actually remains part of the Angels' organization after clearing waivers and returning to Triple-A.

Homer Bailey: Author of two no-hitters, Bailey made two starts for the Twins in 2020 before a biceps injury ended his season. Like Kemp, he wasn't with a team in spring training.

David Robertson: We last saw Robertson in 2019, when he blew out his elbow seven games into a three-year contract with the Phillies. The Phillies bought out his 2021 option, but given his 2.90 career ERA, it's certainly possible Robertson could pitch his way back to the big leagues. He said he had offers in the offseason, but nowhere that felt like the right fit. He was a member of the 2017 World Baseball Classic gold-medal-winning team.

Edwin Jackson: Yes, add another team to Jackson's ledger -- he pitched for 14 of them across 17 big league seasons, not counting two stints with the Tigers. He was last seen in the majors in 2019, when he posted an unseemly 9.58 ERA in 67.2 innings.

Some players to watch on other teams:

Jose Bautista, Dominican Republic: Yep, he's still around at 40 years of age, although he last played in the majors in 2018. Other veterans on the Dominican roster include Melky Cabrera, Emilio Bonifacio, Juan Francisco and Jumbo Diaz. The only pitcher with big league experience since 2018, however, is reliever Williams Jerez. 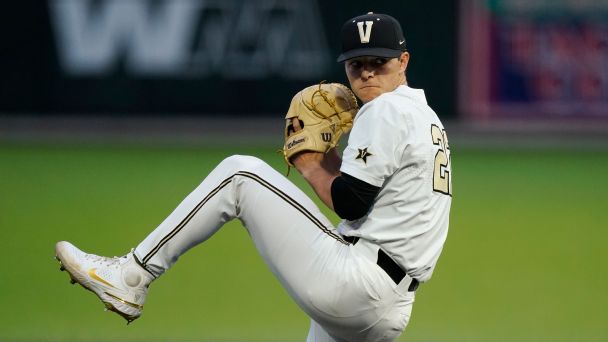 Two months from draft day, it's time for our first look at how every first-round selection will play out.

Julio Rodriguez, Dominican Republic: The top-rated prospect on any of the rosters, the Mariners prospect was No. 9 on McDaniel's top 100. He's off to a strong start at high-A Everett, hitting .322/.404/.575, although he has struck out 26 times in 21 games. Royals shortstop Jeison Guzman and White Sox right-hander Emilio Vargas are a couple of other prospects of note.

Anibal Sanchez, Venezuela: The long-time starter was a key member of the Nationals' rotation during their 2019 World Series title run, but he struggled in 2020. Other recognizable names with major league experience include catcher Robinson Chirinos, infielder Hernan Perez and pitcher Wil Ledezma.

Ivan DeJesus Jr., Puerto Rico: The Puerto Rican roster has a few players with MLB experience, including DeJesus, Jesmuel Valentin, Jason Garcia and Noel Cuevas, but the majority of the roster is former minor leaguers no longer in affiliated baseball.

Jeter Downs, Colombia: Born in Colombia, the Red Sox prospect entered the season No. 41 on the top 100, although the jump to Triple-A after only a handful of games at Double-A in 2019 has been tough going; he's hitting .239/.333/.394 with 31 strikeouts and eight walks. Jhon Torres is another interesting prospect, currently in high-A for the Cardinals, where he's hitting .291, albeit with no home runs.

John Axford, Canada: The Canadian roster features former big league hurlers Axford (who hit 96 in a recent exhibition game), Andrew Albers, Scott Mathieson, Chris Leroux and Dustin Molleken as they elected to go with a more experienced squad. Mariners prospect Ben Onyshko is the youngest player on the team at 24.

Carlos Teller, Nicaragua: Nobody on the roster has played in the big leagues, although there are many players with international experience, included the left-handed Teller, who heads the pitching staff and started against the U.S. on Monday.