Shohei Ohtani is a wonder.

My MLB career spanned the heart of the steroid era in baseball. Its noxious cloud still makes us question today's players and their motives, and tantalizes any performer to consider modern shortcuts to gain an edge.

But the most damage it did might be in robbing us of our ability to be awed -- fans and players alike.

As a young Little Leaguer -- playing for hometown businesses like Joey's Children's Wear or Carratura Construction -- I'd watch batting practice at a big league ballgame whenever we got there early enough. Growing up in New Jersey, I'd go to Yankee Stadium or Shea. I watched the trajectories, the four-second wait for the ball to come down. Baseballs looked like planetesimals, orbiting the brilliance of the talent on the field. Where would their orbit take them? Anything seemed possible.

I learned to judge fly balls through baseball's requisite course in ballistics. I needed to know if a fielder could catch it, or should have caught it, to speak intelligently in the inevitable debates. I could also hold my breath after sensing it might go over the fence. The ultimate crescendo on baseball's sheet music.

I became one of those players, yet I never lost the power to be awed by incredible moments. It didn't have to come from the guy with the best fastball or the most prodigious power -- it could come from anyone, anywhere. You could not will it, you could not contrive it, and even when you tried, you could never understand how it would be received. In 1999, I managed to surpass 200 hits in a season, but how could I have imagined that my 200th hit would come on a home run against the team that had traded me?

Just as I watched the batting practice of Vladimir Guerrero Sr. to see how hard and far he could hit a ball, or Billy Wagner throwing fireballs from his fire-hydrant frame, I was even more moved when I saw Eddie Oropesa reunite with his family, which he had not seen for years after defecting from Cuba.

The game is rightfully called "The Show," and from the power-precision of Curt Schilling to a Scott Rolen home run trot to Jimmy Rollins' sixth sense on the bases, it was a daily occurrence to be amazed by my teammates and my opponents. But you never knew when it was going to happen. You just saw the ingredients shifting around in the mixing bowl until the right combination coalesced and it started to glow.

I played against the best; I played with the best. There are players who make you watch the replay for a second look, and then there are players who make you look up to the stars. Ohtani is that star, distant for his unimaginable and unreachable talent but our nearest star for the brilliance he shows on the field, reinvigorating our game. He has all the ingredients to make magic at any given moment.

I can tell you some mechanical truths to Ohtani to give you context. I can't recall a hitter being able to consistently take a pitch he was beat by and still hit it for a home run to the opposite field. He turns an emergency swing, a swing meant for defense and caution, into a weapon and reduces top-notch pitchers to space dust. But he also can defeat top-notch hitters with his arm, dealing scintillating splitters and teleporting rocket fastballs at 100 mph. That combination places him alone in the sky, a rare comet that reduces us all to Rosetta space probes trying to land on its surface.

Yet he chooses not to be alone, seeking instead to bring the game with him, challenging us to see that it can follow.

Years ago, long before Ohtani's arrival in the States, I interviewed Masanori Murakami, the first Japanese player to play in the big leagues (for the San Francisco Giants). He came to America in the mid-'60s as we faced social revolution, and he was teammates with future Hall of Famers Willie McCovey, Willie Mays, Orlando Cepeda, Duke Snider, Juan Marichal and Gaylord Perry. I asked him which player from Japan he was most excited about at the time. He answered without hesitation.

A teenager at the time.

I went online and I saw the power and the arm, the way Ohtani could light up the radar gun, but it takes more than that to be an agent of change. Talent can be bought or even shot into your arm, but Ohtani had soul, defying roles and labels and living in the previously unknown space between the batter's box and the mound. You wondered if he could pitch to himself.

In my years in sports, I have seen a team rally behind a teammate when he lost his sister in his homeland of the Dominican Republic and the power of unity as we traveled after 9/11, when players from all over the world supported each other.

It spoke to how someone can have your back, can understand you, can change your heart without speaking a word. So much of the game is nonverbal. A hand on your shoulder, a pat on the back, the look in your eyes.

On the field, in baseball, there is not much to say until time has done its work. During the game, in the present, we signal, we sign, we gasp, we speak without speaking. Who is covering on a double play, what pitch is coming, where I should play when the hitter gets two strikes. 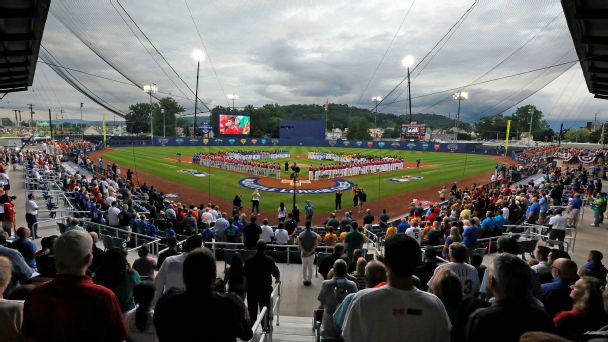 There is a universal language we learn to understand. Much is unwritten, outlining a range of expectations around respect, honor, retaliation and celebration. It morphs and shapes without a sentence being uttered, edited by time, tradition kicking and screaming along the way. It implores us not to get hung up on predetermining who gets to be an editor.

The game is most hopeful when it embraces how its artistry knows nothing of the limitations of our self-imposed constructs -- that our uniform, our city, our team are strong enough bonds to check ego at the door, even when larger society might remind us of its social batting order. An order that does not win ballgames.

I have seen balls hit a mile that defied what my experience told me was possible, and my suspended disbelief did not stay suspended when I knew the scope of how much performance enhancement plagued the game. It was like revealing the secret to a magic trick. Part of us wants to stay forever in our Little League uniform and revel in the blind faith of innocence. But while magic is important even to major leaguers, integrity is more important.

Ohtani has renewed that sense of awe -- a chance to be awed again -- tugging at the childhood of perennial All-Stars and season-ticket holders alike. He takes me back to my first over-the-fence home run in Little League, as a 9-year-old. I hit it off of Mike Wilkins, a blond-haired Goliath who must have been 10 feet tall. I ran around the bases in a fog, amazed at how I produced, and then felt, the unfathomable. Ohtani is that chance to see how much a player -- teammate or opponent -- can amaze you and redraw the lines of our imagination. He pushes us to remember how important it is to open our hearts and minds to what is so much bigger than us.

I am thankful for Ohtani because he has restored what playing in the steroid era took from me, a doubt that took away my ability to know what was authentically great. The unfortunate truth that the magicians of my game cared more about self than anything else, ignoring the importance of how you get there. Or, as my mom would say, "They want to get there without going."

So this week it is fitting that Ohtani will take the field in Williamsport, home of the Little League World Series. He has the ability at a major league field to make it look like he is hitting at a park where it's just 225 feet to all the walls, but he also has the ability to turn All-Star opponents and teammates into their 10-year-old selves.

The path you take matters, and Shohei Ohtani has reminded us that wonder is a necessary aspect of progress. To see our own reflection in others, to hope for a better version of ourselves, to know that our brilliance does not require the dimming of others, and that we can understand this to our core, without saying a word.