The celebration was subdued after the Chicago White Sox clinched the American League Central Division in Cleveland last Thursday: Just hugs and high-fives in a rainy mist near the mound at Progressive Field, as the team celebrated its first division title since 2008.

There were two reasons for the White Sox's reserved nature. This day had seemed inevitable for almost five months, and the team was telling the baseball world it has much more to play for this year.

And the victory was notable for one more reason: Incredibly, the clinching win came 38 years and six days after the last time manager Tony La Russa lead a White Sox team to a division win.

Those celebratory scenes were a far cry from the controversy upon La Russa's hiring last October, and they only came after the 76-year-old manager earned the trust of his young, vibrant clubhouse. There were some rocky moments, for sure, while that trust took time to build, according to the heart and soul of the whole organization.

"Yeah, definitely," shortstop Tim Anderson said on the field after the win. "I think he was the right man for the job. I couldn't be more happy for him to lead. He's been nothing but positive since he's been here."

For the White Sox, having spent 142 days in first place, clinching became inevitable, but La Russa's success with the team was anything but after a decade away from the dugout. He last managed for the St. Louis Cardinals in 2011.

And what La Russa knows from experience could fill every locker in Guaranteed Rate Field. After 34 years managing in the majors, he brought a certain presence to a roster with an average age of 28.2.

But it hasn't been without hiccups. When La Russa publicly chastised April phenom Yermin Mercedes for swinging at a 3-0 pitch in a blowout, he rubbed some the wrong way, igniting the debate between old-school and new-school approaches.

The effects reverberated throughout the clubhouse -- pitcher Lance Lynn defended Mercedes, leading La Russa to clap back at him -- but it was Anderson who had the last word, one which set the tone for the clubhouse for the rest of the season.

"Tony's like that dad, we're like his kids," Anderson said at the time. "We're like the bad kids who don't listen. But we all get along."

That incident -- which felt like it dominated headlines for weeks -- now feels like a distant memory, after the White Sox built an insurmountable lead in the AL Central.

"By example, he showed what he was about and what he expected," Leyland said. "He wasn't trying to impress anyone.

That fun would only come after the trust between manager and players grew with time. It would be needed as the White Sox found the path to success littered with roadblocks.

It didn't take long for La Russa's three decades of experience to be needed. The team lost left fielder Eloy Jimenez (pectoral) in spring training, center fielder Luis Robert (hip flexor) in May and then second baseman Nick Madrigal (hamstring) in June. And there were plenty of other nagging ailments as well, including to Anderson, the former batting champ.

"He's managed more than I've been alive," pitcher Dallas Keuchel said. "We had to navigate some things. He never let us feel bad about ourselves just because we had two to three injuries. That's my lasting first impression of Tony."

La Russa had an even more succinct answer.

"Concentrate on what you have, not what you don't have," he stated. "The games still count."

Asked if there was one moment during the season which stands out above all others, Keuchel couldn't come up with one.

"But I think that's a good thing that I can't pick one point," he said. "You have to be so consistent in this game. Tony has been that."

La Russa has often said he walked into a good thing with the White Sox. The team was fully out of its rebuilding stage and onto its winning one when the three-time World Series winning manager was hired.

As he navigated those early injuries, and the team got production from young players like Andrew Vaughn and Gavin Sheets, the White Sox began to roll. They went 19-10 in May and never relinquished first place after taking the division lead on May 4.

Knowing his earlier comments of joining a good thing, La Russa was asked if he backed off at all, letting his ultra-talented team try to coast.

"That's 180 degrees the exact opposite of what we believe," he answered. "We believe we coach our asses off the first day of the year and the last day of the year. There's always tweaks. We've been on alert the whole time. You never back off. The game is too volatile."

Gaining trust of his players wasn't his only concern. He had to simply get to know them on the field. What makes them tick? Which pitchers are go-to high-leverage guys? That takes time on any team, but on a fully formed contender, La Russa knew he had to accelerate the learning curve.

"While you're learning about your players, you can lose some games," he said. "So I was most worried about familiarity."

Perhaps his biggest contribution at the time was going micro on his team instead of macro. There was a sense of survival before they could take off.

"The message is always the simpler, the better," La Russa explained. "You try to win the series. That doesn't change. The consequences change but not the game. The worst thing you can tell a team is we have to sweep a series."

La Russa's biggest challenge is ahead of him. His team isn't playing its best baseball and is still dealing with injuries, including to starter Carlos Rodon, a key first-half cog. Keeping his team sharp in the final games, as the White Sox attempt to overtake the Houston Astros for home-field advantage in the first round, combined with getting healthy is what's at stake.

"Any time you have the slightest distraction and start taking for granted a game or series, you are exposing yourself to getting in a rut that you can't just turn back on," La Russa said. "Our priority is if a guy is sore, he's going to rest. The guys that play are going to play like it's the seventh game of the World Series. You have to keep trying to win now."

See Rodon for evidence. He's getting up to 10 days between starts. And while that philosophy is sound, it's not 100% foolproof. Anderson is dealing with leg issues, so you won't see him going full speed. 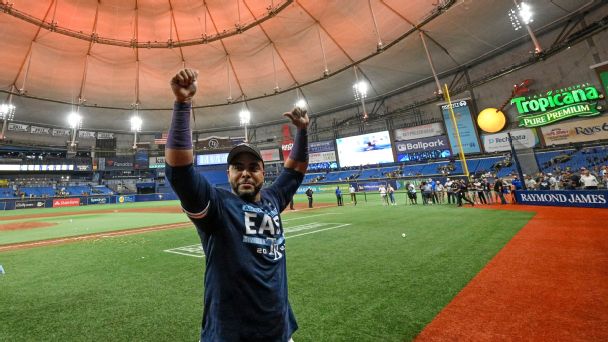 Which teams are in, who can clinch next and the full postseason schedule through the World Series. Story »

It's becoming more and more apparent that La Russa might be willing to trade home field advantage in the first round for a healthy roster in October.

"The difference between 2005 and now is the division is horrible," says Ozzie Guillen, a television analyst who was the White Sox' manager when they won their last World Series. "It wasn't in 2005. That was a great division. Right now, the White Sox went through a tough challenge with injuries but not the division. ... Tony knows exactly what he has to do. He's won it easy, and he's won on the final day to get in."

In fact, his last time in the postseason, La Russa's Cardinals did indeed get in after winning Game No. 162. This time it's much different, igniting another old debate in baseball. Is it better to win a division by 10 games or by a couple? Baseball might be the only sport where rhythm is so important.

To keep sharp, La Russa even played a recent 14-game stretch against plus-.500 teams like a playoff preview. He challenged his team to prep as if each series were a playoff one. They went 7-7.

"I thought that was very smart," Leyland said. "They still had some injuries. Came out of it .500. ... When the playoffs come, you can flip a coin. It's a crapshoot when you get in there."

Leyland actually downplayed the experience factor in October considering the nature of short series but he noted it's likely to appear leading up to the postseason.

"It's about the side stuff that goes on," Leyland explained. "The tickets and family and stuff like that. Tony's experience will come in good there if they listen."

Perhaps prepping for the postseason will be just as important as playing in it. The White Sox aren't firing on all cylinders like they were earlier this season. They know they have to pick up their game -- since the All-Star Break, they've played .500 baseball.

"When you get your magic number into the single digits then you have to talk to your players about how you finish it," La Russa said. "And how you finish it takes you into October. We need to play better."

There was a time where the White Sox could have been considered an AL playoff favorite, but now they're likely to enter the postseason as a clear underdog. The team is hoping experience does matter.

"He's got to have seen 99% of what's happened or what will happen," Keuchel said. "We know he's going to handle it based on his experience. We're going to need it."