It's a little melodramatic to suggest the Toronto Blue Jays' season was on the line Wednesday night against the New York Yankees, but it's not exactly incorrect.

With the Boston Red Sox closing out a 6-0 victory over the hapless Baltimore Orioles, the Blue Jays were tied 5-5 in the eighth inning, having blown an early 4-0 lead against Yankees ace Gerrit Cole. They were in danger of falling four games behind the Yankees and, more importantly, two games behind the Red Sox for the second wild card, with just four games remaining.

Up stepped Bo Bichette leading off the bottom of the eighth against Yankees reliever Clay Holmes, who isn't a household name -- understandable given he pitched the first four months of the season with the Pirates -- but has been crushing hitters of late. He came over in a deal at the trade deadline that nobody paid attention to and has been close to unhittable since joining the Yankees, with just one extra-base hit allowed in 25 innings.

Bichette is one of the rising young stars for the Blue Jays, but has played in the shadow of MVP candidates Vladimir Guerrero Jr. and Marcus Semien. He had already homered off Cole in the third inning, and after taking a 96-mph sinker low for ball one, he drove a 94-mph sinker on the insider corner to right-center, just clearing the scoreboard for the 6-5 lead -- an incredible display of bat speed to drive that pitch to the opposite field. Bichette exploded around the basepaths, slapping his chest and raising his arm as he rounded third base and eventually received a curtain call from the Blue Jays' fans. Jordan Romano closed it out for his 22nd consecutive converted save, and the Blue Jays remained one game behind the Red Sox and moved two games behind the Yankees. They are very much still alive.

I think most hardcore baseball fans who don't root for the Yankees or Red Sox would prefer to see the Blue Jays in the playoffs. TV executives, not so much. It's not just that we've seen the Yankees and Red Sox in the postseason so much over the decades -- and the Red Sox just won it all three years ago. It's simply that the Blue Jays are fun, imposing and, frankly, would be the more entertaining team to watch in October.

They have Guerrero. They have Semien, who notched his 44th home run with a first-inning blast off Cole, to set the single-season record for home runs by a primary second baseman, breaking Davey Johnson's record of 43 for the 1973 Braves. They have Bichette, who is hitting .295 with 28 home runs and 101 RBIs, meaning he and Semien became the first second base/shortstop combination with 100 RBIs in the same season since Bobby Doerr and Vern Stephens of the 1950 Red Sox. They have George Springer and the joyful Teoscar Hernandez. They have the likely Cy Young winner now in Robbie Ray (Cole's second bad start in three outings all but wraps it up for Ray). They have the home run jacket, adorned on the back with logos of all the countries represented on the team's multicultural roster and awarded in the dugout after each home run. They have Romano, the closer who is straight out of the 1980s with his moustache. They have those baby blue uniforms they wore on Wednesday, another relic of the '80s. 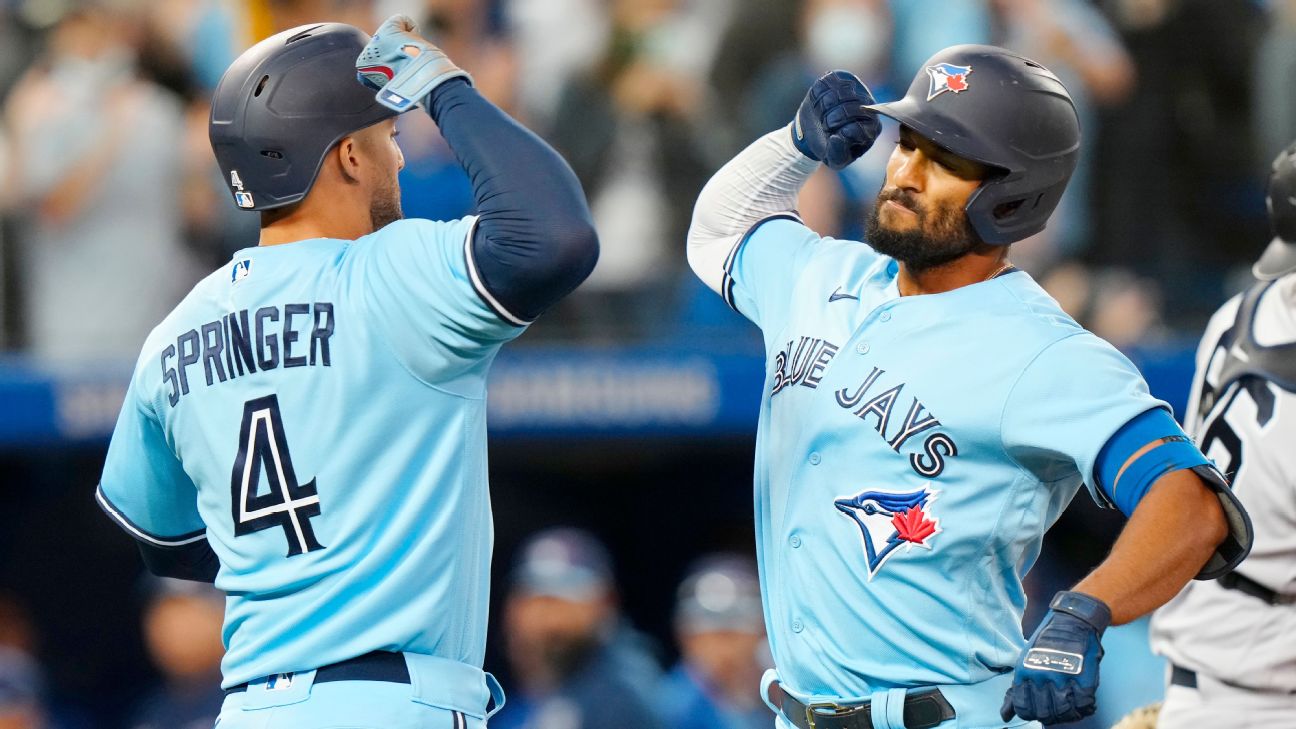 The Jays have had the most high-scoring games, scoring 10 or more runs 21 times, most in the majors, and scoring a whopping 250 runs in those 21 games, an average of 11.9 per game. They've won 18 games by eight or more runs, most in the majors. By contrast, the Red Sox have just eight such wins and the Yankees six. On the other hand, they've scored two runs or fewer 40 times -- almost the same as the Red Sox (41) and Yankees (42).

So they have basically the same number of low-scoring games but a lot more high-scoring games, which is why they're trailing in the standings despite that superior run differential. I'm not exactly sure what this says about the Toronto offense.

Do they simply beat up on bad pitching and the back ends of bullpens more than other teams? Since the lineup is so right-handed, are they susceptible to certain types of right-handed pitching? Is it just one of those things that has happened?

It could be all of the above.

Still, it feels like the Blue Jays would have the best chance of the three teams to make a deep run into October. The offense is explosive, the rotation has solidified with the trade for Jose Berrios and the emergence of rookie Alek Manoah, and the bullpen has been much improved over the past two months. The Yankees and Red Sox, meanwhile, continue to run hot and cold. The Yankees seem to go as Giancarlo Stanton and Aaron Judge go (hot of late) while the Red Sox are just a game over .500 in the second half.

The good news for Toronto is Cole has made his last regular-season start. His next game will either come Monday in a potential tie-breaker game or in Tuesday's wild-card game. The Rays, meanwhile, will start Ray on Thursday against Corey Kluber. The Red Sox can get one more regular-season start out of Chris Sale (on Sunday), but Nathan Eovaldi started Wednesday, so he's on the same timetable as Cole.

All this means the four clubs (including Seattle) are already in the midst of playoff baseball. Just win and stay alive for one more day. The Yankees have a little cushion. The Red Sox have a soft schedule. The Seattle Mariners aren't even supposed to be here. The Blue Jays? They're just hoping to go 4-0, hand out that home run jacket many more times over the next four days and then watch that scoreboard.