BOSTON -- The chants at Fenway Park during this Red Sox playoff run echo in your mind. When Gerrit Cole struggled through the AL Wild Card Game, failing to make it past three innings, Boston fans made chants of "GERRIT!" ring through the crowd. When Rays outfielder Randy Arozarena ran out to right field, Red Sox fans in the bleachers let him hear it with chants of "RANDY!" (He tipped his hat in response.) After Luis Patiño gave up a game-winning home run to Christian Vazquez in Game 3, fans greeted him pre-game in Game 4 with jeers, leading the Rays pitcher to blow kisses to the crowd. When Patiño later entered the game -- facing Vazquez -- the Fenway crowd echoed a jeer from annals of Red Sox history.

Maybe it's the months spent inside during COVID quarantine. Maybe it's that the Red Sox find themselves back in the playoffs after posting one of the worst records in baseball during the 2020 season. Maybe it's the division rivalry playoff games against the Yankees and the Rays that elicited the rowdy bleacher chants, but few around Fenway Park can remember an atmosphere this loud and enthusiastic as the audience the Red Sox played in front of in Boston during this playoff run.

With the roar of a Marathon Monday crowd behind them, Boston advanced to the ALCS with a 6-5 win over the Rays on Monday night. The Red Sox took the lead early in the game in the third inning behind a Rafael Devers three-run homer, an Alex Verdugo RBI double and an RBI single from designated hitter J.D. Martinez. While the Rays chipped away at the score in the fifth innings with an RBI from Austin Meadows and a sixth-inning Wander Franco home run, even tying the score in the eighth, the Red Sox rallied yet again, with a Kiké Hernandez walk-off sacrifice fly in the bottom of the ninth inning.

Players on both the Rays and Yankees admitted the effect of the crowd on the game. The sentiment from those around the team -- from the Fenway Park security guards to the players to the coaches to the front office executives -- remained the same across the board: The crowds in Boston are at another level this postseason, a near-legendary status.

There's magic in the air right now at Fenway Park.

Outfielder Hunter Renfroe: "I think that was probably the best fans, noise, interaction that I've ever seen, from both ours and Yankees fans alike."

Hitting coach Tim Hyers: "My personal experience, this has been as good as any. I've had my kids in town and they've been to a lot of playoff games with me and they said this was incredible. They haven't experienced Fenway like it was in the past week."

Chief baseball officer Chaim Bloom: "I've had people who have been in this organization for decades tell me that last Tuesday was the best night at Fenway that they've experienced. Last night, tonight -- everybody brought it."

The crowds at Fenway have plenty of reasons for excitement. Coming into the season, the analytics group for the Boston Red Sox projected modest expectations for the 2021 team, a squad they believed could win around 86 games and compete for a wild-card slot. Instead, by the end of the first half, they were on pace to win 98. No other team in baseball tallied more comeback wins, who, in the process, re-calibrated expectations for the season.

Still, Red Sox fans fumed at the trade deadline when the team added slugger Kyle Schwarber and reliever Hansel Robles but no additional reinforcements to the bullpen and rotation. By late September, after the Sox were swept by the Yankees then dropped two-of-three against the Baltimore Orioles, the pressure had risen again -- Boston needed a win in the final game of the season to clinch a spot in the wild-card game. In that must-win game against the Nationals, the Red Sox fell behind 5-1 before Rafael Devers hit a game-winning home run -- his second of the day -- that helped supercharge the Red Sox into the playoffs in one of the final plays of the MLB season.

Better yet, their wild-card appearance would come at home -- against the Yankees. In front of the first playoff crowd at Fenway since the 2018 World Series, the Red Sox showed up early -- scoring two runs against Gerrit Cole in the first inning. They controlled the entire game and won 6-2. That win set a tone, and they haven't lost a playoff game at home yet.

In a season following one where no fans could enter the ballpark, the Red Sox could feel the difference in energy with a packed Fenway Park. Outfielder Alex Verdugo described playing in front of no fans in 2020 like "hearing crickets" -- "the weirdest feeling." The presence of the crowd at Fenway Park this postseason, he said, actively changed the dynamics on the field.

"It's just natural adrenaline," Verdugo said. "When you already have guys rooting for you, you don't need to bring that much energy because it's already there. It gives you that extra adrenaline, that extra butterfly that makes you want to get it done."

Each of their postseason wins had a different hero: Devers. Hernandez. Vazquez. But even before the postseason fireworks began, Alex Cora pointed to his ballclub's roster depth -- particularly as a parallel with the 2018 team that beat the Dodgers in the World Series. As Boston prepared to finish off the Tampa Bay Rays in Game 4, that assessment was more true than ever -- and Cora believes it's a huge reason why the team is moving on to the American League Championship Series.

"As far as versatility, we have to be creative and we try to maximize our roster the best we can," Cora said earlier in the season. "I think that team was faster. We were able to do more running the bases, but I think result-wise, offensively, it's very, very similar."

That offense is the core to the team's success this postseason -- and in the regular season, when Boston finished fifth in baseball in runs scored. Cora's belief in the team's ability to collect runs fuels an optimism in the Boston dugout that no matter the score, the Red Sox offense gives the team a chance to win -- much like the 2018 team, when they averaged more than five runs per game.

But the dynamic in the crowd differs from 2018.

"Shoutout to all of the fans. You guys have been on your feet for two days straight, and I don't know how you're doing it," said designated hitter JD Martinez. "It's awesome. In 2018, everybody was hyped and pumped, but not like this. I feel like this year is just a little bit different." 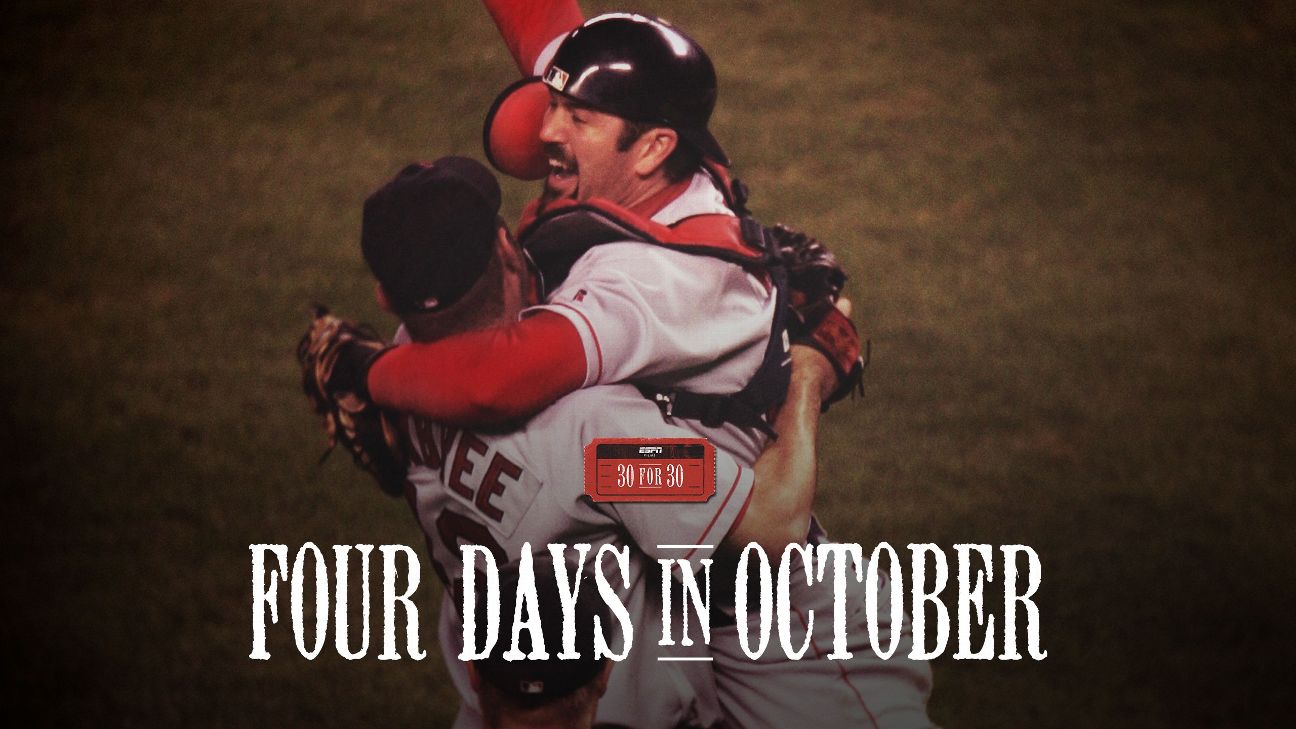 Over four consecutive days and nights, this determined 2004 Red Sox team miraculously won four straight games to overcome the inevitability of their destiny. Stream on ESPN+

Hernández, perhaps more than any other player, seemed to take advantage of the magic in Fenway this weekend, following up his standout Game 2 performance with another three hits in Game 3, including a solo homer and a game-tying RBI. The eight hits in two games tied the all-time record in a single postseason (Derek Jeter had eight hits in two games during a span between the 2005 and 2006 postseason), while his seven consecutive hits fell one short of the all-time record.

It was the kind of performance Hernández had hoped for since he signed with Boston, looking to establish himself as an everyday player after his time with the Dodgers typecast him as a utility player. But for much of the season, the transition seemed unlikely to work out. Hernández said he struggled to feel comfortable in the early part of the season after Cora anointed him the lineup's leadoff man. He started to settle in in late June, when Hernández decided to hit the reset button on his season after hitting .227/.287/.387 through June 25 before smashing a leadoff homer against Gerrit Cole on June 26.

"I told myself that the season started today and started feeling better, and then that day against Cole, they put me back in the leadoff spot and I was already feeling pretty good at the plate and then I said that I'll take my chance the first pitch of the game and I hit a homer first pitch," Hernández said. "I took off from there."

The combined playoff experience of the roster contributes to the team's ability to stage comebacks, according to Hyers. Bogaerts, Devers, Martinez and Vázquez all played big roles on the 2018 championship team while recent additions like Hernández, Schwarber and Renfroe all boast playoff experience on their resumes.

"They don't panic and they know how to play the game to win and offensively they know how to succeed," Hyers said. "Doing it is a different thing, but they have that experience to draw from."

As much as this team reminds its manager and many of its players of 2018, going from here, they'll be comparing themselves to a different Red Sox team: the 2013 squad. The 2021 Red Sox were the fourth team since 1969 to advance to the LCS one season after finishing last in their division. The previous one to do it? The 2013 Red Sox -- who went on to win the World Series.

To get there, the Sox will need more of the offense that won them the first two rounds -- and, yes, a little more luck. Bloom acknowledges that a lot of things needed to fall Boston's way to find themselves in the ALCS -- from the Giancarlo Stanton lasers in the wild-card game that would have been homers in most other ballparks, to the Kiermaier double off of Renfroe's hip.

"I'm just glad the baseball gods," he said, "had our backs."