Dave Dombrowski knew the moment could go one of two ways.

On April 11, 25-year-old third baseman Alec Bohm had made three errors in a game against the New York Mets, and the Philly crowd was showering him with boos. After Bohm was caught on camera mouthing 'I f---ing hate this place," the Philadelphia Phillies president was hopeful the leadership he acquired in the offseason would show up.

"Our players got with him right after the game," Dombrowski told ESPN recently. "(Nick) Castellanos, (Kyle) Schwarber, (Kyle) Gibson and (manager) Joe Girardi all got with him. Then he addressed it head on."

Instead of slipping out without speaking to reporters or doubling down on his frustrations postgame, Bohm stood in front of his locker and held himself accountable for what was caught on camera.

"I said it. Do I mean it? No," Bohm said after the game. "It's a frustrating night for me, obviously. Made a few mistakes in the field. Look, these people, these fans, they just want to win. You heard it, we come back, they're great. I'm just sorry to them. I don't mean that."

The next night, Bohm was greeted with a standing ovation from the 26,045 fans at Citizen's Bank Park as he walked to the plate for a pinch-hit at-bat in the eighth inning.

"He handled it as well as you possibly could handle it," Dombrowski said.

In that way, at least, Dombrowski's offseason additions were working exactly to plan.

Of course, given those plans, it also comes as no surprise the incident would ignite over defense. Since the two days in March when the Phillies surprised the baseball world by signing both Kyle Schwarber and Nick Castellanos, one question has percolated: Can Philadelphia catch the ball enough to win?

The Phillies were already a poor defensive team before their moves this offseason, ranking 24th in the majors with a minus-21.1 rating since the start of the 2020, according to Fangraphs. Last season, they were dead last in the majors in defensive runs saved.

Going into the offseason, the logical step seemed that any moves the Phillies made would be aimed at addressing their run prevention problem -- instead, they signed two players who ranked near the bottom of Statcast's outs above average metric in Schwarber (first percentile) and Castellanos (fifth).

Schwarber has been hearing criticism about his defense since he came up with the Cubs as a converted catcher in 2015, and the subject was brought up often during an adventurous postseason at first base for the Red Sox last season.

Castellanos, meanwhile, is coming off an All-Star 2021 season with the Reds in which he accumulated 4.0 offensive WAR -- and negative-1.3 defensive WAR, according to baseball-reference.com.

Luckily for the Phillies, they will likely only need defense from one of those players at a time, thanks to the introduction of the universal DH, which became a reality in the new collective-bargaining agreement after the MLB lockout ended.

"I sort of scratch my head when people [complain about it] because the reality is only one is scheduled to play in the field on a daily basis," Dombrowski said of Schwarber and Castellanos. "The other one is a designated hitter."

(Of course, two weeks into the season, Phillies manager Joe Girardi was already penciling Schwarber and Castellanos into his two corner outfield spots at spacious Coors Field after a sore elbow dictated Harper would need to take over the designated hitter spot. Harper is expected to return to the outfield soon.)

But most of all, the Phillies say there's no cause for concern because their players are committed to putting in the work.

"We weren't as good as we needed to be last year," Bohm said during spring training. "Everyone knows that. We're working on it."

Whether it succeeds could be up to infield coach Bobby Dickerson, a defensive guru who has worked with four Gold Glove winners and is best-known for his work with Manny Machado. Dickerson first paired up with the five-time All-Star in Baltimore and spent the past two seasons in San Diego as the Padres bench coach (he spent 2019 as part of the Phillies staff).

"It doesn't have to be spectacular," Schwarber said. "If we make our routine plays, that's how you win baseball games."

And so far with Dickerson back in town, the Phillies are making the routine plays, ranking 13th in the majors in outs above average.

"Bobby Dickerson is one of the best in the game," Bryce Harper said. "Guys have to want to be coached. Guys need to buy into that. If we do that, we'll be better than we were last year."

The biggest reason that the Phillies weren't worried about giving up a few extra runs this summer because of their defense was that they were now even less worried about scoring them.

"Score a little more than we let in, right?" Harper said of the team's philosophy.

When Dombrowski added both Schwarber and Castellanos -- joining dangerous hitters like Harper, J.T. Realmuto, Rhys Hoskins, Bohm and Jean Segura -- he put National League pitching on notice that the Phillies were going to thump. As much as they heard the talk about their potential issues on defense, players were reminded their offense could be special. 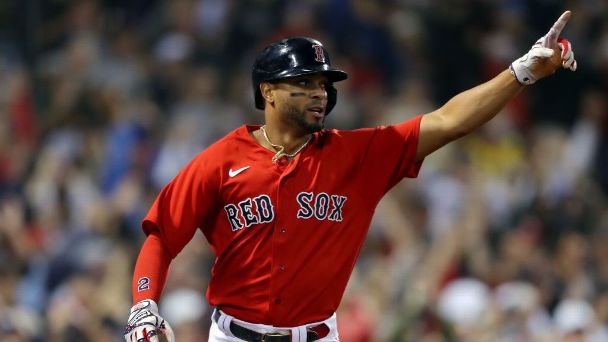 "I was joking with Schwarber the other day when we scored 10," starter Kyle Gibson said. "He said 'I could see this happening in about 40 percent of your starts.' Sign me up for that!"

They will need them to hang with the Braves and Mets at the top of a strong NL East -- but so far early returns have been mixed.

Small sample size alert, but 13 games into the season, a lineup expected to be the Broad Street Bullies has been closer to league average, ranking 12th in MLB at 4.38 runs per game after finally exploding for nine runs in Wednesday's series finale in Denver.

As for the newcomers: Castellanos has hit the ground running in his new home, posting a .953 OPS. But Schwarber has struggled to find his footing, hitting just .170 in his first 47 at-bats even after introducing himself to his new fan base by belting a 426-foot home run on the seventh pitch he saw in a Phillies uniform on Opening Day.

For the Phillies to get where Dombrowski envisions them going this year, those tape measure home runs and offensive outbursts need to come often enough to offset their defensive shortcomings.

"On paper we look good, but we have to go out there and do it," Harper said.

Castellanos echoed that sentiment: "What can be done doesn't mean s---."

Their lack of defense wasn't the only reason that the Phillies bringing in Schwarber and Castellanos was surprising. But in giving Dombrowski the green light to sign them both, owner John Middleton showed again that he is willing to do whatever it takes to bring a championship to Philadelphia.

"When I first heard I was kind of speechless," Harper said. "It shows how much ownership wants to win...I've never worried about that with Mr. Middleton. Going through the lockout stuff I knew I didn't have to worry about my owner. He wants to bring a championship back to Philly."

This is a team that has doled out more than half-a-billion dollars to make Harper, Realmuto and Zack Wheeler the core of the roster since Middleton famously said, "We're going into this expecting to spend money -- and maybe even be a little bit stupid about it," heading into the 2018 offseason.

Gibson joined the team through a trade from the Rangers in 2021, but he could tell the Phillies were a team to watch way back during his 2019 free agency.

"Oh, I was looking at Philadelphia in free agency, for sure," Gibson said. "I don't think it's a secret the Middleton family wants to win. I think they felt like this is our time."

And so exactly one day after the team agreed to a four-year, $79 million contract with Schwarber on March 16, Dombrowski approached Middleton about inking Castellanos as well. He knows some executives would have been shown the door, but after a year on the job, he had a good handle on his team's owner.

"After signing Schwarber, I went home and I'm looking at my stuff, and I see Castellanos is still out there and don't see him close to signing anywhere," Dombrowski recalled. "I told (Middleton) it would be a big contract but not an unreasonable one.

And if Castellanos had any hesitation about signing with a squad that had just picked up a similar player, it faded quickly -- that move actually made Philadelphia more attractive to the slugger.

"When they signed Kyle and showed the confidence that they had in who he was, a lot of organizations wouldn't do that for him, because everything is so analytically driven," Castellanos said. "But knowing who Kyle is - and banking on that - showed me this organization is in tune with baseball players and cares about the right thing. That was peace of mind for me."

For now, the Phillies are a work in progress, attempting to improve on defense while waiting for their offense to click and highly regarded starting staff of Wheeler, Gibson, Eflin, Aaron Nola and Ranger Suarez to hit their stride -- they can help the team in the field as well.

"The more strikeouts you have, the less defense you need," Gibson said. "Defense is a lot of effort. Guys are putting in the work."

Like Dombrowski, a city that's hungry for postseason baseball is watching closely for it to come together. But the architect of the team is sure of one thing; his big additions this past offseason -- Schwarber and Castellanos -- will be in the middle of it all.

"They are as advertised," he said. "They bring a different edge to our club. There's no question that they do."