LOS ANGELES -- The Baltimore Orioles made high school shortstop Jackson Holliday the first selection in Major League Baseball's draft on Sunday, but the biggest shock came with the No. 3 overall pick, as the Texas Rangers selected Kumar Rocker, the highly touted pitching prospect who famously did not sign with the New York Mets last season.

Rocker, 22, was selected 10th overall last summer, but the Mets ultimately did not offer a contract after some concerns with his medicals. Rather than return to Vanderbilt, Rocker made five appearances for the Tri-City ValleyCats of the independent Frontier League, posting a 1.35 ERA with 32 strikeouts and four walks in 20 innings while reportedly reaching 98 mph with his fastball. He was expected to go late in the first round, but the Rangers clearly see enough upside to have taken him high in a draft that does not boast much pitching.

The Rangers are expected to be able to sign Rocker for about $2 million less than the $7.59 million that is designated for the No. 3 overall pick, sources told ESPN's Jeff Passan. Rangers general manager Chris Young said the organization is "extremely comfortable with the medical review."

"Kumar's risk is on the medical; we recognize that, but we are comfortable with what we've seen," Young added. "This is an elite competitor, an unbelievably strong, tough person who, if you talk to anybody who's been around him, he's just a winner. We're comfortable with the medical, we're excited about where he is physically and we're looking forward to a great future with the Texas Rangers."

Rocker was named the Most Outstanding Player in the 2019 College World Series and was a finalist for the Golden Spikes Award in 2021 alongside Leiter, leading Division I with 14 wins and tying Leiter for the lead with 179 strikeouts while adding a 2.73 ERA in 122 innings. (Arkansas pitcher Kevin Kopps won the 2021 Golden Spikes Award.) Rocker underwent a shoulder procedure shortly thereafter, in September 2021, but the procedure was considered minor and did not involve his rotator cuff or his labrum.

Rocker spent the next 10 months trying to prove himself anew, but he said he always believed he would be a first-round pick again.

"I think my talent speaks for itself," Rocker said on a video conference.

Asked if he has an added chip on his shoulder based on what he went through last year, Rocker said: "I wouldn't necessarily call it a chip on my shoulder, but I have renewed motivation moving forward just to attack my work at a different rate, in a different way."

Holliday, the son of seven-time All-Star Matt Holliday, is an elite hitter who made significant strides in several aspects of his game during his senior year at Stillwater High School in Oklahoma. The 6-foot-1, 175-pound left-handed hitter finished his senior season with a .685 batting average and was named the Baseball America High School Player of the Year.

Holliday previously committed to Oklahoma State, where his uncle, Josh, is the head coach, but he will now likely venture directly into professional baseball, where his improving quickness and arm strength are expected to keep him at shortstop. Holliday's calling card, however, is his hitting. The 18-year-old already has an advanced approach in the batter's box, having accumulated 89 hits in 41 games last season and breaking the high school record previously held by Philadelphia Phillies catcher J.T. Realmuto. 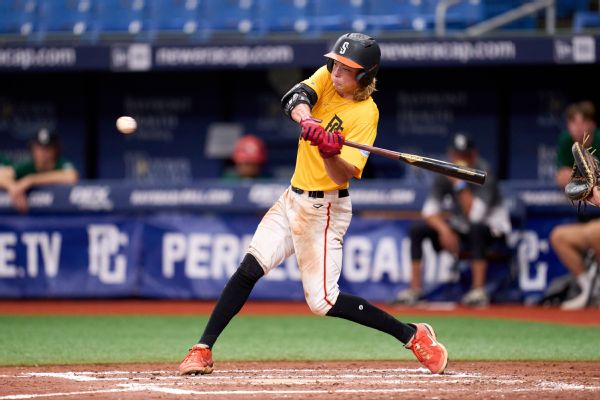 "I kind of found out as they were saying it," Holliday said of realizing he would be the first player drafted. "That was really cool. My dad didn't really tell me. He was kinda on the phone, and then he's like, 'All right, you're just gonna find out.' That was really, really neat and something that I'll probably never forget. I didn't know it was a possibility, to be honest, going into the high school season. I just wanted to help my team win and hopefully put myself in a good position heading into today."

There was a lot of uncertainty about whom the Orioles would take No. 1 overall, with Jones, Georgia high school middle infielder Termarr Johnson and Cal Poly shortstop Brooks Lee -- picked eighth overall by the Minnesota Twins -- among the rumored selections. Orioles general manager Mike Elias likened it to "deciding what to order in a five-star restaurant."

"This was a very good class," Elias said. "We boiled it down to five players. We had advocates and rationale for taking any one of the five players; but ultimately, you're only allowed one of them, and we picked our favorite one."

Jones, a Vanderbilt commit, is a premium defensive center fielder with five-tool potential, just like his father. The younger Jones stands 6-foot-4 and 180 pounds, and he is coming off winning the Gatorade Georgia Baseball Player of the Year Award while leading Wesleyan School to the Georgia Class A private school state championship.

Jones is arguably the best defender, at any position, in this draft and has displayed both elite foot speed and bat speed on the showcase circuit. His swing still isn't a finished product -- he is 18, after all -- but he has continually improved upon his plate discipline, and more raw power will come as he fills out his frame. Jones batted .570 with 13 home runs, 32 stolen bases and a 1.702 OPS in his senior year.

The Pittsburgh Pirates selected Johnson at No. 4, and the Washington Nationals followed with Florida high school outfielder Elijah Green at No. 5, making this only the second time in draft history that high school position players went with four of the first five picks.

Johnson, 18, is considered the best hitter in this draft and is arguably one of the greatest high school hitters in history, his bat drawing comparisons to the likes of Rafael Devers, Jose Ramirez, Wade Boggs and Vladimir Guerrero. A 5-foot-10, 175-pound left-handed hitter, Johnson already possesses the bat speed, power and hand-eye coordination that could eventually make him a consistent 30-homer threat in the major leagues. Johnson, an Arizona State commit, played shortstop in high school but is deemed a better fit at second base at the professional level.

"The Pittsburgh Pirates got the best player in the draft," Johnson said from the site of the draft at L.A. Live. "We gon' make it happen."

Green is the son of former Pro Bowl NFL tight end Eric Green. The younger Green, 18, is a prototypical risk-reward type who many thought might slip in the first round of the draft. He stands 6-foot-3 and 225 pounds, and he boasts the elite power, speed and arm strength that had him on a trajectory to develop into a slam-dunk No. 1 overall pick heading into 2021. But Green has produced some worrying swing-and-miss rates while playing for IMG Academy in Florida the past two springs, though he ultimately slashed .462/.592/1.000 in 25 high school games this season.

The Orioles had the No. 1 overall pick for the second time in four years, after drafting Oregon State catcher Adley Rutschman in 2019, and they are just starting to emerge from a prolonged rebuild as players matriculate through their system.

The Orioles, with Rutschman now in the majors, recently went on a 10-game winning streak to vault into the American League wild-card race despite playing in the industry's most difficult division. In five seasons prior, they lost a major-league-worst 64% of their games. Each of their past four first-round picks was a collegiate position player, with Baltimore drafting, in descending order: outfielder Colton Cowser (fifth overall in 2021), outfielder Heston Kjerstad (second in 2020), shortstop Jordan Westburg (30th in 2020) and Rutschman.

The draft will be only 20 rounds long for the second straight year (it was previously 40 rounds), and the Orioles entered it with the second-largest bonus pool in history at $16.9 million. The Mets are the only team with two selections within the top 30, one of which is compensation for not signing Rocker last year; and the Los Angeles Dodgers are the only team with zero, a penalty for the amount at which they exceeded last year's luxury tax threshold. This year's No. 1 overall pick comes with a slot value of $8.84 million, but the Orioles have gone under slot with their past two first-round picks in order to use the savings elsewhere in the draft.

Each selection within the first 10 rounds of the draft comes with an assigned value. Teams are mostly free to ration out the totality of their bonus pool as they please but face overage taxes if they exceed their allotted amounts. First-round picks begin to be taken away if teams outspend their allotted amounts by more than 5%. Teams have outspent their allotments 172 times in the 10 drafts with bonus pools but never by more than 5%, according to MLB.com.

The first three pitchers taken in this year's draft -- Rocker, Horton and Hughes -- all went higher than many of the draft prognosticators had them ranked from a talent perspective, a nod to the relative lack of top-shelf pitching talent. The San Diego Padres later took a chance with right-hander Dylan Lesko with the No. 15 pick. Lesko, out of Buford High School in Georgia, became the first junior ever to be named the Gatorade National Baseball Player of the Year in 2021, but he suffered an elbow injury in April and underwent Tommy John surgery.

The Padres have historically taken high-upside chances like Lesko under president of baseball operations A.J. Preller.

"I feel great," Lesko said of his recovery from Tommy John surgery, which sidelines pitchers anywhere from 12 to 18 months. "I don't think there are going to be any complications."