One of my favorite "Peanuts comics is a Sunday strip in which Charlie Brown, determined to finally get a baseball card of his favorite player, Joe Schlabotnik, buys $5 worth of cards. This was back when $5 bought you roughly 500 cards, all of which your mother (or spouse) would one day throw away.

Charlie Brown opens every single package, becoming ever more frantic and frustrated as he goes along, until he is knee-deep in opened wrappers and discards. Naturally, he doesn't get a single Joe Schlabotnik card. Lucy, however, then spends a penny for one pack of cards and, sure enough, gets Joe Schlabotnik. AUGGGHHHHH!!!!!

Everyone knows that feeling all too well. So with the release last week of the new 2013 Topps set, I crossed my fingers and hoped for the best when I opened my first pack of cards of the season.

Here's what I got:

No. 329: Rafael Soriano. The card shows Soriano in a New York Yankees uniform, but the reliever just signed a two-year deal with the Washington Nationals for $28 million. That's a lot of money for a closer, but you might over-spend, too, if your city hadn't been in a World Series in 80 years and you'd just given up four runs in the ninth inning to lose a series-clinching playoff game. Talk about AUGGGHHHHH!!!!!

His new contract lifts Soriano's career earnings to $67 million. Not bad for a reliever the Seattle Mariners once traded to get Horacio Ramirez. When Seattle made that trade, I figured then-general manager Bill Bavasi knew something the rest of us didn't. Turns out, no, he didn't.

No. 38: Brian Wilson. I like the text on the back of this card: "'The Beard' saw nearly the entire 2012 season shaved off his career by Tommy John surgery in April." Where does Wilson's beard rank in all-time facial hair? I would put it behind Rollie Fingers' handle-bar mustache and way ahead of Derek Holland's pubescent mustache from two years ago. Evidently, though, Wilson did not have that high a BAR (Beard Above Replacement) because he was amply replaced in both the closer and beard role by Sergio Romo last year. I'm not sure where he'll land, but given their no facial hair policy, I'm guessing it won't be with the Yankees.

Oh well. If nothing else works out, he can always get work endorsing Smith Brothers cough drops.

No. 133: James Shields. The back of the card reads, "Trade rumors whirled around James last July, but the Rays wisely held onto their all-time wins leader." Well, at least for a while. Sheesh, I'm only three cards into the pack and all three players are no longer with the team pictured. And the amazing thing is, none of them is Octavio Dotel.

No. 94: AL ERA Leaders. Season-leader cards were always a disappointment as a kid, and they remain so. It's not a player card and it's not much of a photo, either. Besides, doesn't Topps understand that stat-heads don't care about ERA anymore? They want Adjusted ERA+ or WHIP leaders!

No. 298: World Series Game 1. On the other hand, the World Series recap cards were always a favorite when I was a kid, so I love seeing this one. I tear up just seeing this card. Not because I'm emotional about my childhood team winning a World Series. I'm over that; after all, this was the Giants' second world championship in three years. No, I'm tearing up because while I was interviewing Pablo Sandoval after the Giants beat the Tigers, someone sprayed champagne right in my eyes and they still sting.

No. 224: John Jay. This one has Jay crashing against the padded fence to make a catch. It's a beautiful card, even if it shows Jay next to a ghostly image of Tony La Russa on the wall, contemplating a pitching change. Action photography has improved remarkably since I started collecting cards as kid, back when a fuzzy photo of Harmon Killebrew popping up was worthy of "in action" status.

No. 112: Mark Reynolds.For some reason, this card is splashed with a sparkly green tint that makes it look like Reynolds joined the Care Bears over the winter instead of the Cleveland Indians. For the record, the photo still has him in a Baltimore Orioles uniform.

No. 262: Kevin Correia. Correia won his seventh consecutive start on Aug. 8, at which point the Pittsburgh Pirates were 16 games above .500 and 2½ games ahead of the Giants in the wild-card race. Pittsburgh went 16-36 the rest of the season to finish with its 20th consecutive losing season. And, sadly, there is a decent chance the Pirates will pay tribute to Roberto Clemente with consecutive losing season No. 21 this year. Correia, though, won't be there to help. He signed with Minnesota in December, making his card the fifth in this pack to have a player in the uniform of a team for whom he no longer plays. Publishing deadlines are odious.

No. 190,: Daniel Descalso. This is another terrific card, with a photo of Descalso at Busch Stadium, leaping high over second base. Or possibly, given the height of his leap, the surface of the moon.

No. 162: Kyle Seager. The back of this card reads: "Kyle won an open competition for third base job in 2012, and became arguably Seattle's top 'money hitter.'" I agree that Seager was one of the few pleasant surprises for Seattle last year. But being called the Mariners top "money hitter" is like having the International Monetary Fund list your currency higher than Greece's.

So, overall, it was a disappointing pack: eight player cards, four of whom are no longer with the team depicted, and no stars. But I will say it is a very good-looking set. And I love the career chase feature.

This card (1988 Topps, No. 610) prompts one obvious question: Is Keith Hernandez wearing the same funny-nose-and-glasses disguise that Bobby Valentine wore with the Mets a decade or so later? 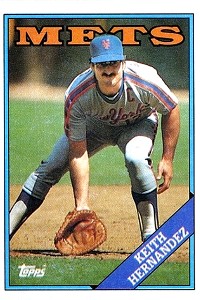 And That Will No Doubt Be Followed By Six More Months Of Such Stories.The good news is that Punxsutawney Phil did not see his shadow last weekend, which means we are due for an early spring. The bad news is that he did see Alex Rodriguez's shadow outside a Miami wellness clinic, signaling six more mind-numbing weeks of A-Rod stories, speculation and rumors.

I Don't Think Scott Boras Does This With His Clients. Earl Williams, the 1971 National League rookie of the year, died of leukemia last week at age 64. You might not remember Williams, a first-round draft pick who hit 61 home runs over his first two seasons, including 33 as a rookie. His career went into steady decline after that, and he was out of baseball by 1978. And that's when perhaps his most lasting claim to fame took place.

As the New York Times mentioned in his obit over the weekend, Williams was so desperate for a job that he took out a want ad in the Times.

The "no police record" was a nice touch for the resume; but, unfortunately, there were no major league offers. Williams played two seasons in the Mexican League and then retired, sadly ending what had been a promising career. May he rest in peace.

There are a couple clues in this fragment. The biggest one is the name Wilhelm. You can see that he hit a home run and that he picked up the win in relief. The other names (Mays Westrum, Thomson) indicate this is a New York Giants game from the early 1950s; and their opponent also puts it in that time frame as Boston didn't have a National League team after 1953. Put all that together and you might have guessed that this is one of Hoyt Wilhelm's first games.

In fact, it's the game in which he got the first win and the first home run of his Hall of Fame career. (The home run was also his first career hit.) That was a pretty special day for Wilhelm. Though he played another 20 seasons, he never again hit a home run.