According to a recent, well-researched and very entertaining Boston Globe story, major league game times are longer than they used to be, reversing a trend. They're back up to an average of nearly 2 hours, 58 minutes this year, matching the all-time high in 2000.

As the Globe and so many others (including myself) have detailed over the years, the reasons for the increased length of games are legion. Longer TV commercial breaks. More pitching changes. Pitchers taking too much time on the mound once they get there. Hitters listening to every verse and chorus of their walk-up music, then constantly stepping in and out of the box. And, of course, the Red Sox and the Yankees playing each other.

It's a travesty, isn't it? Why, if something isn't done immediately, baseball games soon will be lasting as long as football games!

That's the puzzling thing about this. The media is busy whining about baseball games lasting nearly three hours, but isn't at all concerned about football games almost never lasting less than three hours.

But the average time of a baseball game increases by a couple of minutes, and it's time for a constitutional amendment outlawing walk-up music.

Don't get me wrong. I don't enjoy a slow-paced game any more than the next guy. Watching a hitter fiddle with his batting gloves or a manager making another pitching change bores me, too. Baseball famously is played without a clock, but it could occasionally stand being played with a stopwatch.

This, though, is not the proper time to complain about the pace of games. No, after the past week's excitement, it's time to salute baseball for the length of its games.

Last week, we saw bonus panels pile up like student loans. The White Sox took a 5-0 lead in the top of the 14th inning against Seattle on June 5, but the Mariners extended the game into the 15th when third baseman Kyle Seager hit a game-tying grand slam. How cool was that? The game finally ended in 16, with the White Sox winning 7-5. Then on Saturday, the Blue Jays and Rangers played 18 innings in Toronto, and the Mets and Marlins played 20 innings in New York.

I missed that Mariners-White Sox marathon because I was covering the French Open. But it was such a noteworthy game that its write-up was one of the main headlines in the sports section in France in the roundup of U.S. news. Trust me, the Mariners are rarely national news, let alone international news. But all of those extra innings made them noteworthy in Paris.

That's because the more innings that are played, the more tense and gripping the games get. I can easily lose patience with a dull, slow game, wishing the players would just hurry up and end the thing so we can go home before the morning rush hour. But as soon as the game goes into extra innings, I never want it to end.

I love extra innings and extended stanzas. I want to see benches empty and bullpens drained. I want to see rosters so depleted that position players are forced to take the mound and pitchers are forced to run the basepaths. I want to see the14th-inning stretch and the 21st-inning stretch. And someday, I hope to see a 28th-inning stretch, because that will mean I will have been present for the longest game in major league history. (The current big league record is a trifling 26 innings, while the minor league record 33-inning game between Pawtucket and Rochester in 1981 was so endlessly fascinating that it was the subject of a terrific book three decades later.)

As we sing in "Take Me Out to the Ballgame," once the game goes into extra innings, "I don't care if I ever get back." As one columnist wrote, if you don't like a long game, you don't have to watch. As for me, give me more innings, not fewer.

After all, as commissioner Bud Selig learned at the 2002 All-Star Game, the only thing that angers people more than a slow game is one that ends abruptly without a resolution.

Each week, I provide a fragment from an old box score and challenge you to determine what game it is from and why it's significant. I give this one a difficulty rating of 6. Answer below:

This weekend marks the 25th anniversary of "Bull Durham," the best baseball movie ever made. In recognition of that, here's a baseball card for Ebby Calvin (Nuke) LaLoosh, who, fortunately, did not start a trend with the garter belt look. At least not that we know of. 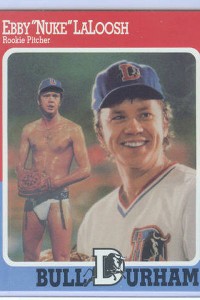 How realistic was "Bull Durham?" I will take a look at that very question in a story on the movie's 25th anniversary Friday.

But even he lost because of the Mets' Shaun Marcum, who pitched eight innings in relief the same game. He lost the game, but he wins this week's award:

That was the longest relief outing since Scott Sanderson in 1989.

The Big Mouth. Hey, I always was a Frank Thomas fan. He will absolutely receive my Hall of Fame vote. But I don't want to hear any more former players talking about how they were clean and how steroid-users should be banned from Cooperstown, as Thomas did last week. I am not in any way suggesting Thomas took PEDs. I don't think he did. But we simply don't know about him or any other athlete. Lance Armstrong, after all, maintained he was clean for more than a decade. That's what makes the whole "Let's ban them" argument impossible to apply. We just don't know who did and who didn't take PEDs before baseball started testing. Even now, we only know for sure about the occasional player who tests positive. We can't pick and choose who we give a free pass to and who we suspect. (And players from the days of widespread amphetamine use shouldn't get too high and mighty about steroid use, either).

There was just one big clue in this fragment: The 0-for-11 for Pick. That would be Charlie Pick, who is the only player to go 0-for-11 in a major league game since 1916 (and possibly before that). He did so in the aforementioned longest game in big league history, the 26-inning 1-1 tie between Brooklyn and Boston on May 1, 1920. Pick entered the game batting .324. He finished batting .250.