LON ROSEN RECALLS the first half of the Los Angeles Dodgers' season not for Clayton Kershaw's four-hit, complete game shutout and exclamation-point home run against the defending World Series champion San Francisco Giants on Opening Day, or for the dreadful 60 games that followed and had manager Don Mattingly wondering if he would be wearing a Dodgers uniform at the All-Star break. Instead, Rosen pointed to a series of seemingly mundane planning meetings with a cross-section of Dodgers advertising and marketing officials on how to approach the season opener at Dodger Stadium. 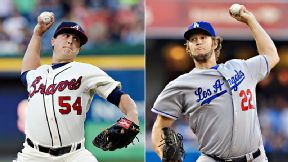 Think, people. Think. Rosen, the Dodgers' chief marketing officer, implored the staffers in the months before the season began to respect the game's traditions but not to limit their thinking to traditional Opening Day celebrations of bunting and speeches. He wanted his people to think bigger, broader, and grander, to consider this day on par with Super Bowl halftime shows and the opening and closing ceremonies at the Olympics and the World Cup. For more assistance and creative energy, the Dodgers worked with Dick Clark Productions, which had produced the Golden Globes, the American Music Awards, and the Miss Universe pageant. After all, this was Los Angeles. The city that invented the entertainment industry, Rosen reasoned, should be able to pull off an afternoon worth remembering.

On a perfect, sun-splashed day, the Dodgers ran a video replica of the torch run that precedes the Olympic opening ceremony. Approximately 56,000 fans were glued to the new multi-million dollar high-definition video boards watching the city's high-wattage superstars flip a baseball from one celebrity to the next until the ball wound up at Dodger Stadium. On screen were Snoop Dogg and Chris Paul, Blake Griffin and Rob Reiner, Britney Spears and Kobe Bryant, Wayne Gretzky, Jessica Alba, Samuel L. Jackson, among others, with Kareem Abdul-Jabbar making the final toss -- a sky hook, naturally, to part-owner Magic Johnson, who thanked Kareem on the video board and then, after shaking hands with the players, stepped out of the home team dugout, introduced by the legendary Vin Scully.

After showcasing the glamour of LA, there was a nod to history. Nearly fifty years had passed since the 1963 Dodgers swept the Yankees to win the World Series. Maury Wills and Tommy Davis represented on the first base line. Next to them stood Orel Hershiser and Tommy Lasorda, honoring the 25th anniversary of the Dodgers' last championship, the 1988 club that stunned Oakland.

Johnson greeted Lasorda and walked to the pitcher's mound. Hershiser, who was to receive the first pitch, crouched behind home plate. As Johnson limbered up to deliver the first pitch, with the San Gabriel Mountains resting famously in the background, Mattingly walked gravely to the mound, as if it were late in the game and the bases were loaded. He said a few words to Johnson, took the ball, and then raised his left arm and pointed to the bullpen, where 77-year old Sandy Koufax, the greatest pitcher in Dodgers history, emerged. The place went wild. Koufax took the ball and threw out the first pitch. The star power was overwhelming. The pride of the franchise flared.

"I didn't want the same old stuff. I told them if anybody came up with birds flying into the sky to forget it," Rosen said. "I wanted them to give me something. I don't think anyone had ever been removed before throwing out the first pitch. I didn't tell anyone that Sandy was going to do it. We had an entire chest of tools to play with. Create something special. Give me something that announced us."

To Dodgers president Stan Kasten, the pregame show defined the organization as much as the highlights of a restorative summer: Kershaw heading toward a potential second Cy Young Award, the sudden star of Cuban showstopper Yasiel Puig, and the 42-8 midsummer streak that pushed the Dodgers into first place and the National League Division Series that begins Thursday against Atlanta.

The reason was clear: Regardless of what occurs in October, the Dodgers may have already won. A management team has been put in place with huge resources, a massive television package, staggering geographical resources similar to the New York Yankees and one of the most powerful brand names in sports.