The baseball postseason is unpredictable, but there is one sure thing. At some point, the hero will be asked to describe his feelings, and he will say something like, "It hasn't quite sunk in yet." Then he'll disappear into the shaving cream pie or the champagne spray or the phalanx of microphones and notebooks. 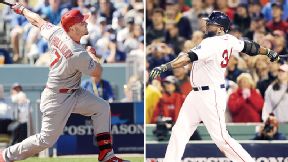 So when does It -- capital I -- sink in, and what does It feel like? It might happen right away, or the morning after, or the following spring, or years later. Gone are the days when Bobby Thomson could take the Staten Island Ferry home after hitting The Shot Heard 'Round the World (1951) or when Bill Mazeroski could sit on a bench in Schenley Park with his wife, feeding squirrels while the rest of Pittsburgh celebrated his ninth-inning home run off Ralph Terry (1960).

Those were simpler times, when the demands on heroes weren't quite as great or immediate. The afterglow seems to take a little more time to kick in nowadays, but It eventually happens.

With that in mind, we asked some selected heroes from the franchises represented by this year's postseason teams to pinpoint when It hit them.