MESA, Ariz. -- Some people have epiphanies when they're struck by bolts of lightning. Addison Russell inadvertently glimpsed his destiny via a beer sign on the north side of Chicago.

In 2010, Russell was a 16-year-old high school sophomore playing in the Under Armour All-America Baseball Game at Wrigley Field when he noticed a neighborhood billboard with a picture of a frosty cold brew beside the words "Where Clark Met Addison." As a product of the Florida panhandle, Russell was unfamiliar with the intersection at which Wrigley sits. But the sign resonated with him anew when the Chicago Cubs acquired him from the Oakland Athletics by trade in July 2014.

"At the time, I was like, 'What does that sign mean?'" Russell said. "Of course, it was the corner of Clark and Addison Streets. I thought that was pretty cool. When I got traded to the Cubs, that thought came back into my head: 'Maybe I have a chance to play in that stadium again.'"

For all the Cubs' torment, they stack up nicely with their MLB competitors in the shortstop department. Ernie Banks won two most valuable player awards at short and hit 277 of his 512 home runs at the position on his journey to Cooperstown. Don Kessinger could really pick it back in the day, and Shawon Dunston possessed the mother of all howitzers. Those three are joined by Joe Tinker, the only .262 hitter to be feted with a Hall of Fame plaque and a poem for the ages.

Against that illustrious backdrop, the argument can be made that Russell arrives at the biggest crossroads and the most exciting time in franchise history. With the team's world championship drought at 108 years and counting, the Cubs are coming off a 97-win season and generating buzz that has prompted the fan base to think the previously unthinkable. Wrigley Field, like the 25-man roster, is undergoing major renovations, and Russell arrives on the scene alongside Carlos Correa, Xander Bogaerts, Francisco Lindor and Corey Seager in a budding "golden age" for shortstops.

If the Cubs are the least bit anxious about entrusting the pivotal defensive position on the field to a kid who is four years removed from anchoring the Pace High School Patriots' starting infield, Russell eases their concerns by arriving at the ballpark early, putting his head down and getting down to business every day. He's a perfectionist and a stickler for detail who should come with a "no maintenance required" label.

"He's got a good head on his shoulders," Cubs president of baseball operations Theo Epstein said. "He's our youngest player, but he might be the one we worry about the least."

During the Cubs' first full-squad workout Wednesday at Sloan Stadium, Russell took his hacks in a batting practice group with Jason Heyward, Jorge Soler and his new double-play partner, Ben Zobrist. In idle moments outside the cage, Russell flipped his bat back and forth between his legs and from one hand to another with the dexterity of a baton twirler.

As Russell worked, the team's new community ambassador looked on approvingly from behind a pair of shades and a Cubs spring training cap. Hall of Fame second baseman Ryne Sandberg knows the real deal when he sees it. Russell has already gained Sandberg's seal of approval.

"His potential is very good," Sandberg said. "He reminds me of a young Barry Larkin, maybe. He has that kind of look and feel. He's very athletic, and he can improvise on making throws when he gets to balls. There's a little bit of an acrobat in there. But there's some steadiness with him too, which is what you want at the position."

"He's one of the more efficient young infielders I've ever seen, when it comes to his movements," Maddon said. "I can only compare him to Derek Jeter. For me, Jeter had the perfect method of picking up a ground ball -- like a Gary DiSarcina. It was very simple, very boring. I think Addison fits in that category."

Mature beyond his years

It would be an understatement to say Russell handled his rookie year with aplomb. Although his 149 strikeouts and .242/.307/.389 slash line were signs that some growth is in order at the plate, Russell displayed considerable pop with 29 doubles and 13 homers in 475 at-bats. That's the same number of homers new Cubs outfielder Jason Heyward produced in 547 at-bats.

"This guy is going to hit," Maddon said of Russell. "If you shake his hand, he has huge paws. Watch him in BP, and it's loud, and it's far."

Russell's glove is his calling card at the moment. He ranked fourth among second basemen with a Defensive Runs Saved of plus-9 the past season, according to Baseball Info Solutions, and he tied for fourth among shortstops with a DRS of plus-10. He possesses a double-barreled ability to make Web Gems and turn routine ground balls into foregone conclusions.

Russell honed his fundamentals under the tutelage of Karl Jernigan, a former Florida State outfielder who played in the San Francisco Giants' chain in 2002-03. He learned to field balls in front of his body, and he embraced the idea that everything begins with efficient footwork and a solid base. Punctual to a fault, Russell prefers to beat the ball to a spot, rather than rely on athleticism or pizzazz.

Nitpickers point to his low throwing slot and an arm that wore down as the 2015 season progressed. But Russell has exceptional accuracy and hits the first baseman in the chest every time.

Russell's slow heart rate was a gift from a higher power. During the 2014 Cubs Convention, he surprised attendees by revealing that he didn't watch much baseball as a youth, and his boyhood idol was the late martial arts icon and action film star Bruce Lee. For a player with so much baseball rat in him, Russell grew up with an appreciation for multiple sports. He played football until his sophomore year in high school and warmed to the contact as a running back.

"This guy is going to hit. If you shake his hand, he has huge paws. Watch him in BP, and it's loud, and it's far." 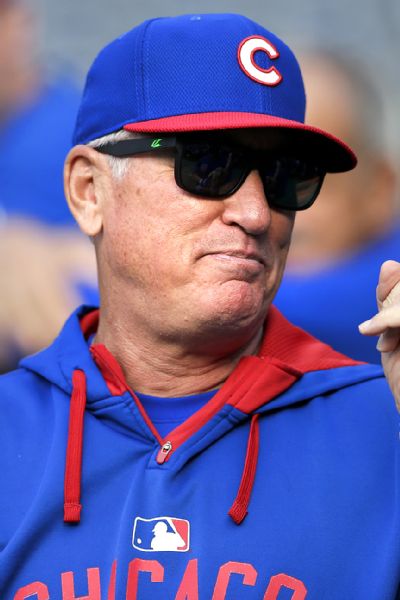 "I could barrel through the line," he said. "I lowered my shoulder. I wasn't scared of getting hit, and I had some good footwork and juking moves. It's all about reading people's eyes. Whenever you come head-to-head downfield with the safety, it's a pretty cool feeling. You do the best you can so he can't tackle you. That's kind of a game I played. I imagined myself as I'm trying to run away and these guys are trying to catch me."

After the Athletics chose Russell with the 11th pick in the 2012 draft and, with a $2.625 million signing bonus, dissuaded him from accepting a scholarship to Auburn University, Russell headed to the Arizona Rookie League and began a quick ascent through the minors. He also paid off a personal debt to the people who so faithfully supported him in his pursuit of a dream.

Russell is the oldest of four children, and the family spent lots of time moving around during his youth. In an effort to inject some stability into the dynamic, he spent a chunk of his bonus on a two-story home with an acre of land for his parents and three siblings in his native Pace, Florida.

Russell feels a special sense of gratitude to his mother, Milany, and his step-father, who entered his life when he was a toddler. Wayne Russell, who works as a cook at the Tuscan Oven pizzeria in Pensacola, was always available with tough love or an encouraging word.

"He always believed in me," Russell said. "The little stuff he used to get on me about hasn't changed. He sees the little kid in me, and it's really cool."

His outward calm notwithstanding, Russell is not above using stray personal slights for motivation. He was a bit heavy and out of shape coming out of high school, and some members of the scouting community and the media speculated that he lacked the attributes to play shortstop in the pros.

After the Cubs chose outfielder Albert Almora at No. 6 in the 2012 draft -- five spots ahead of Russell -- team officials got an update when they saw Russell play shortstop in the Arizona Fall League in 2013. They quickly realized they might have passed on something special.

"I wouldn't say we whiffed, but we didn't spend the time we needed to on him," said Jason McLeod, the Cubs' senior vice president of player development and amateur scouting. "I saw the physicality and the bat speed and the way he carried himself in the Fall League, and I was like, 'Oh, boy.' As the guy who oversees the draft, I was kicking myself a little bit."

McLeod was understandably thrilled when a fortuitous set of circumstances brought Russell to the corner of Clark and Addison eight months later. In July 2014, the A's were 53-33 and pushing to get over the postseason hump when vice president of baseball operations Billy Beane acquired starters Jeff Samardzija and Jason Hammel from the Cubs for a package that included Russell and outfielder Billy McKinney. Although the trade looks bad for Oakland in hindsight, Epstein passes on taking a victory lap.

"Billy is one of the few general managers who's not afraid to make a deal like that to increase his chances of winning in the postseason," Epstein said. "It was a brave trade, and I admire him for making it. We were just in a different place than they were. I like to think if we were in the same place, I would have had the guts to acquire what our big league team needed, which is what he did."

Although everything is trending positively for Russell, he approaches the 2016 opener in unfinished-business mode. After helping the Cubs reach the playoffs, he suffered a hamstring injury in the division series against the St. Louis Cardinals and was a spectator when Chicago dropped four straight to the New York Mets in the NLCS.

At the Cubs Convention in January, Russell spent some time getting acquainted with Zobrist, who signed with the team as a free agent in December. Russell made a positive first impression when he brushed aside talk about middle infield dynamics and told Zobrist, "I don't care about anything else. I just want to win." Russell also made it clear he was itching to arrive in Arizona to start spring training.

"You can see the anticipation," Zobrist said. "Probably more than anybody else in here, he wants to be out on the field right now. He's just like a horse who's bucking right now, and you need to let him out of the pen."

Seemingly, a new wonder awaits each day. In August, Russell's fianceé, Melisa Reidy, gave birth to a baby boy named Aiden Kai, and in January, he and Melisa were married. Russell always felt a sense of responsibility as the oldest of four children, but the flurry of recent life events has taken his dedication to a new level.

As his hero, Bruce Lee, once observed, "If you are in a hurry, you will never get there."

With purpose in his step and resolve in his eyes, Addison Russell is methodically following life's plan. It doesn't take a billboard to confirm he has landed in the right place.