The breakdown of all of their picks is below, along with answers to some interesting questions that stood out from the predictions. Also, to see each voter's individual picks, click here.

Steve, you're the only one who picked the New York Yankees to win the AL East. Why?

A nice blend of youth and experience, speed and power. And then there's the DNA -- the last time the Yankees went four years without finishing first was 1993. -- Steve Wulf 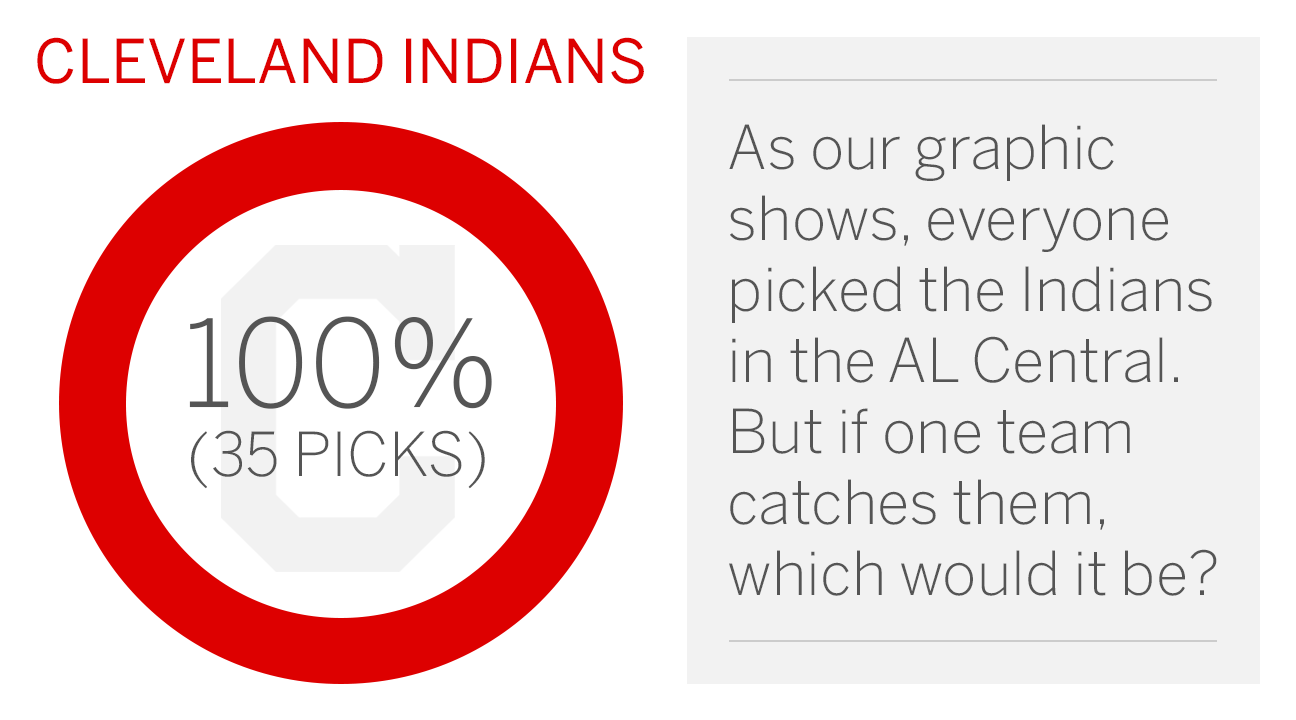 The Tigers are probably the consensus No. 2 team in the AL Central, and if it takes only 85 or 86 games to win the division, sure, they could take it, but the Royals are just one season removed from winning 95 games. They'll need bounce-back years and good health from Mike Moustakas, Alex Gordon and Lorenzo Cain, plus much better numbers from Eric Hosmer, and somebody to step up in the rotation to replace Yordano Ventura, and the bullpen has to replace Wade Davis and ... well, you never know. -- David Schoenfield

Dave, the Astros were a popular pick last year, too. Why will this year be different?

The Astros had the youngest group of position players in the AL last year, and I see that core group of Jose Altuve, Carlos Correa, George Springer and Alex Bregman all having big seasons -- but this time supplemented by a better supporting cast that now includes Brian McCann, Josh Reddick and Carlos Beltran. Everyone worries about the rotation, but I think it's an underrated group, although a better season from Dallas Keuchel will obviously be key. -- Schoenfield 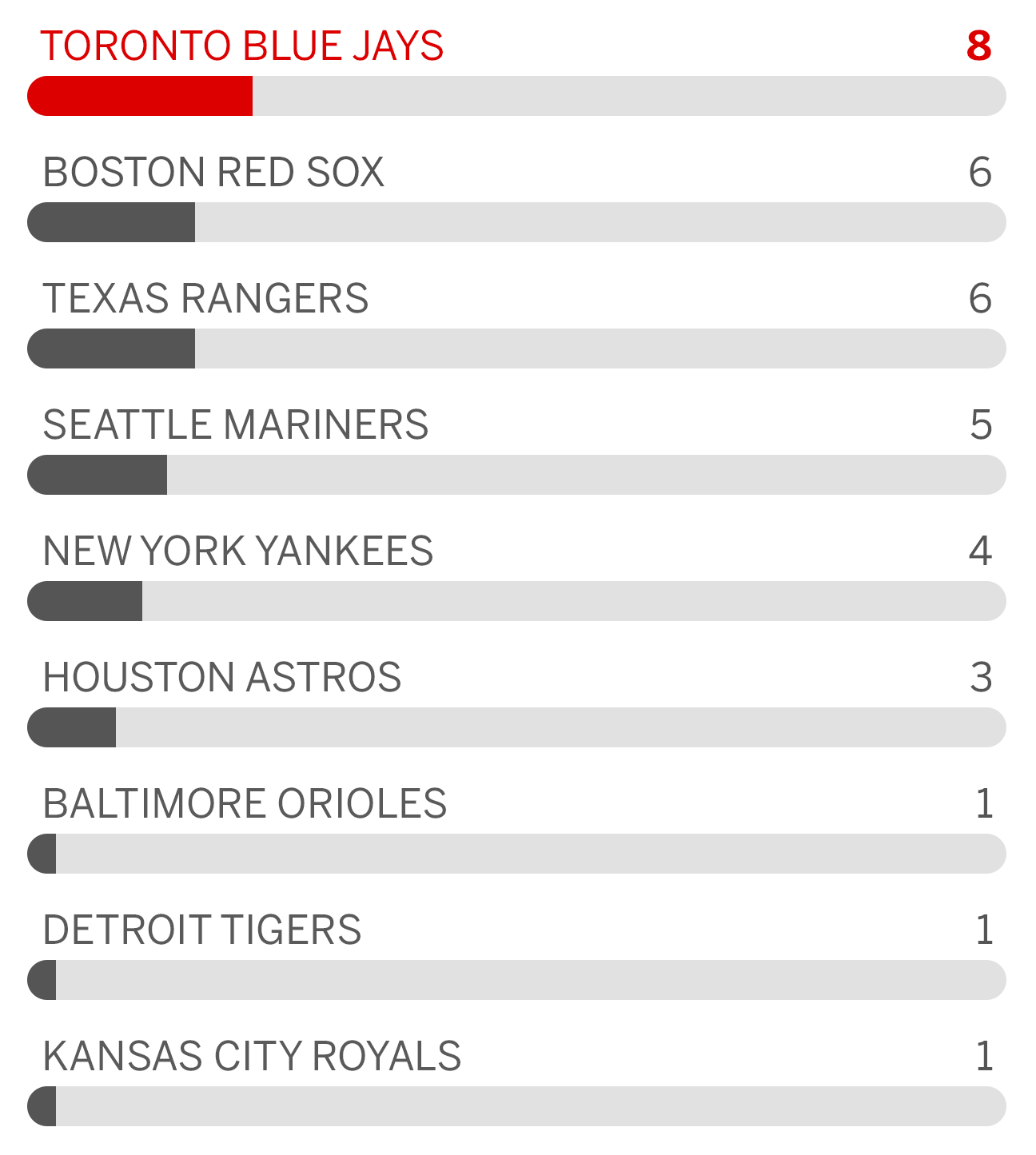 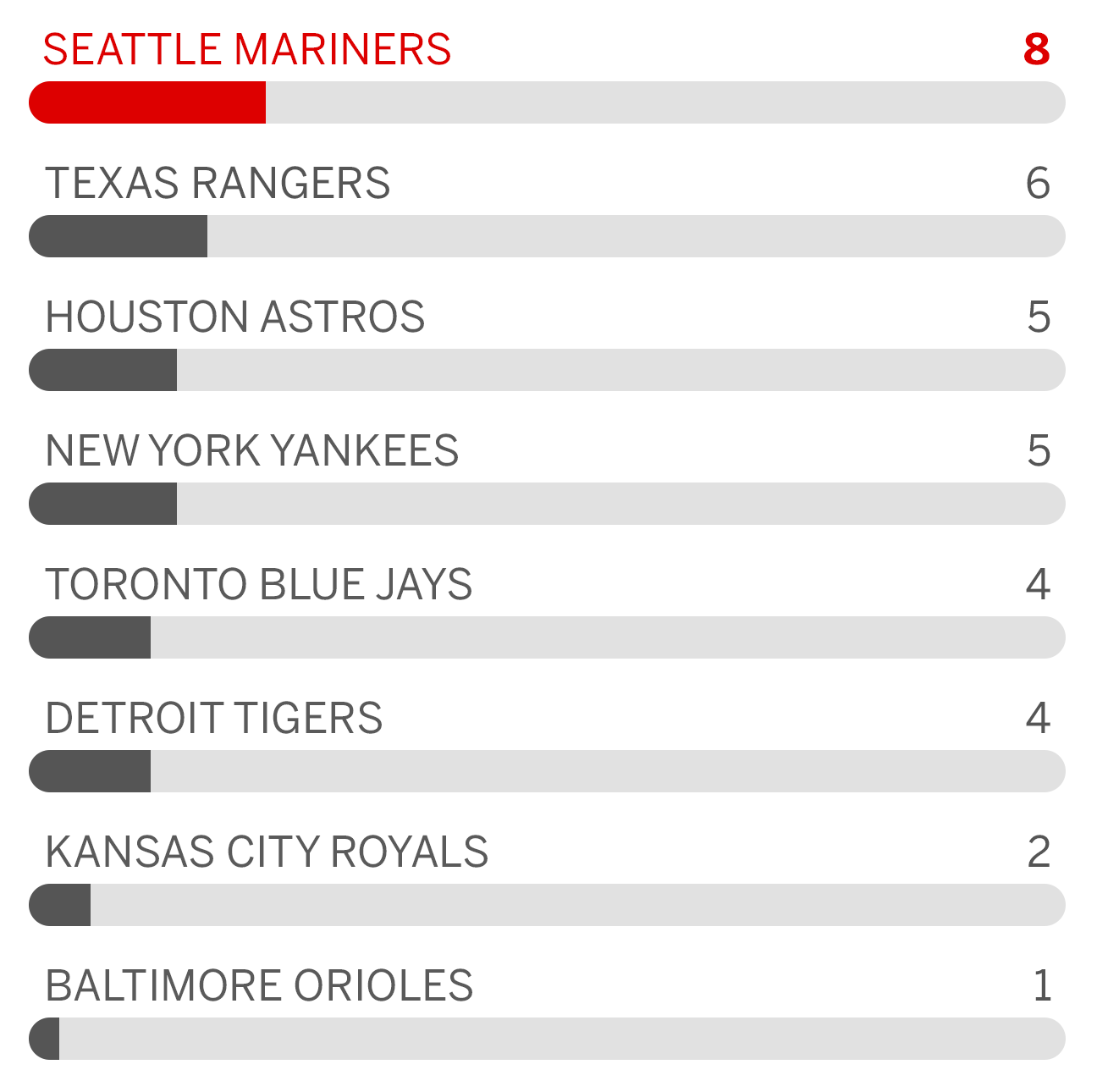 Sarah, not a lot of people (five) picked the Tigers to make the playoffs. Make your case for why you think they have another run left.

The Tigers were good in 2016. Miguel Cabrera hit 38 homers. Justin Verlander had a Cy Young-worthy campaign. Ian Kinsler found his power again. This feels like it could be the last window for this talented group and I expect them to put together a wild-card bid. Maybe that closing window is the motivation they'll need. I just couldn't bring myself to leave them out of the playoffs with players such as J.D. Martinez, Victor Martinez, Miggy, Kinsler, Verlander, Justin Upton and Jordan Zimmermann. -- Sarah Langs

Jim, the Nationals are the favorite in the NL East. Why do you think the Mets will beat them out?

I think both teams will win 90 games or more and make the playoffs. However, I think the Mets will win the division because I like their starting pitching quality and depth. I think that both Noah Syndergaard and Jacob deGrom will be Cy Young Award candidates. I think Matt Harvey -- after four or five starts -- will get back to be being a premium pitcher. Steven Matz will be one of the top five left-handed starters in the league. At the back of the rotation, Robert Gsellman, Seth Lugo and eventually Zack Wheeler could be the difference-makers for the Mets to edge out the Nationals for the NL East title. -- Jim Bowden 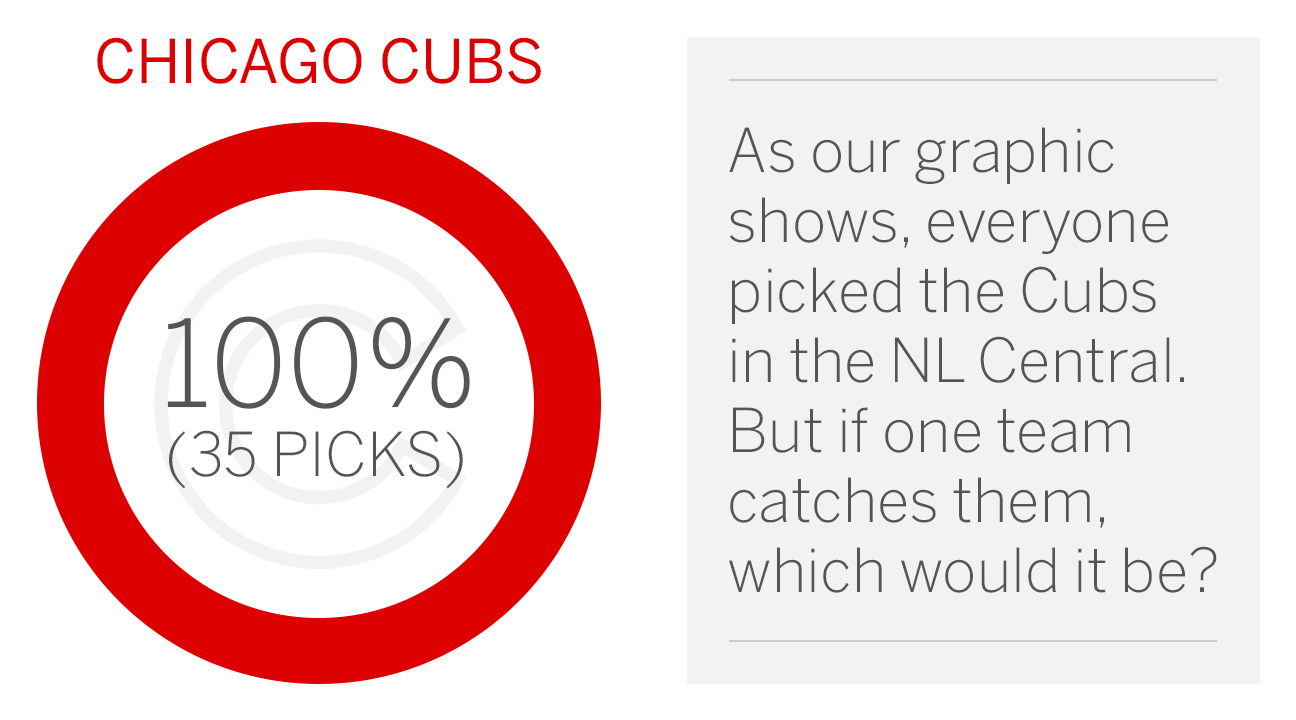 St. Louis is the biggest threat to the Cubs in the Central. The loss of Alex Reyes hurts, no doubt. But the rotation of Carlos Martinez, Adam Wainwright, Lance Lynn, Michael Wacha and Mike Leake is solid nevertheless -- and it doesn't hurt that they'll be throwing to the catching maestro, Yadier Molina. We're still looking at a team that's two years removed from winning 100 games. -- Jerry Crasnick

Dave, most of our experts are picking the Dodgers in the NL West. Why did you go with the Giants?

It would be pretty easy to simply pick the same six division winners again. Of course, we know that won't happen, so I'll take the Giants in a minor upset here. Remember, they had the best record in the majors at the All-Star break before the bullpen collapsed (and the offense went in the tank a bit) in the second half. The bullpen will be better (although Will Smith will be missed), and I see better seasons from Joe Panik and Buster Posey. Also, don't forget that the Dodgers are very reliant on Clayton Kershaw to remain healthy. -- Schoenfield 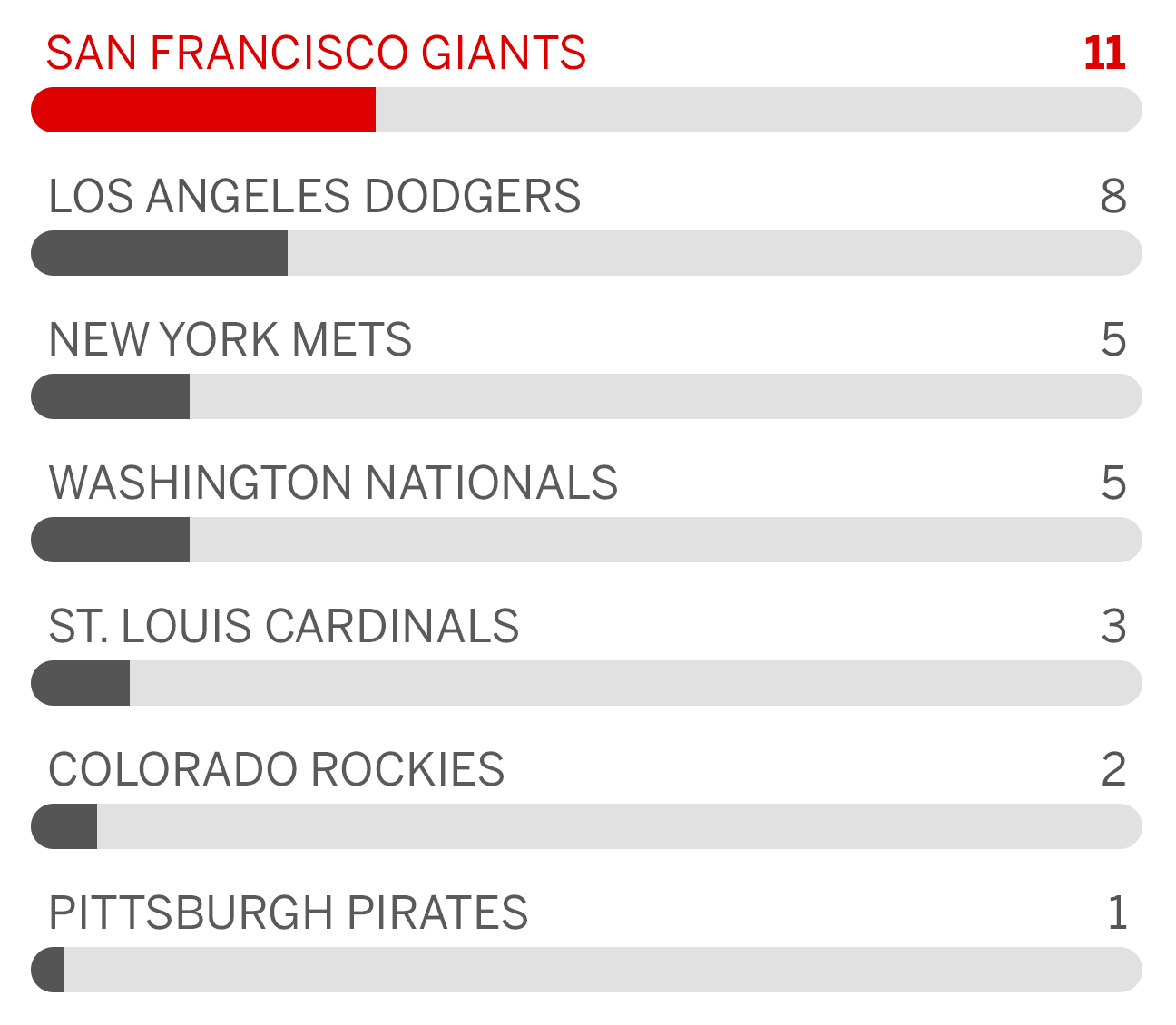 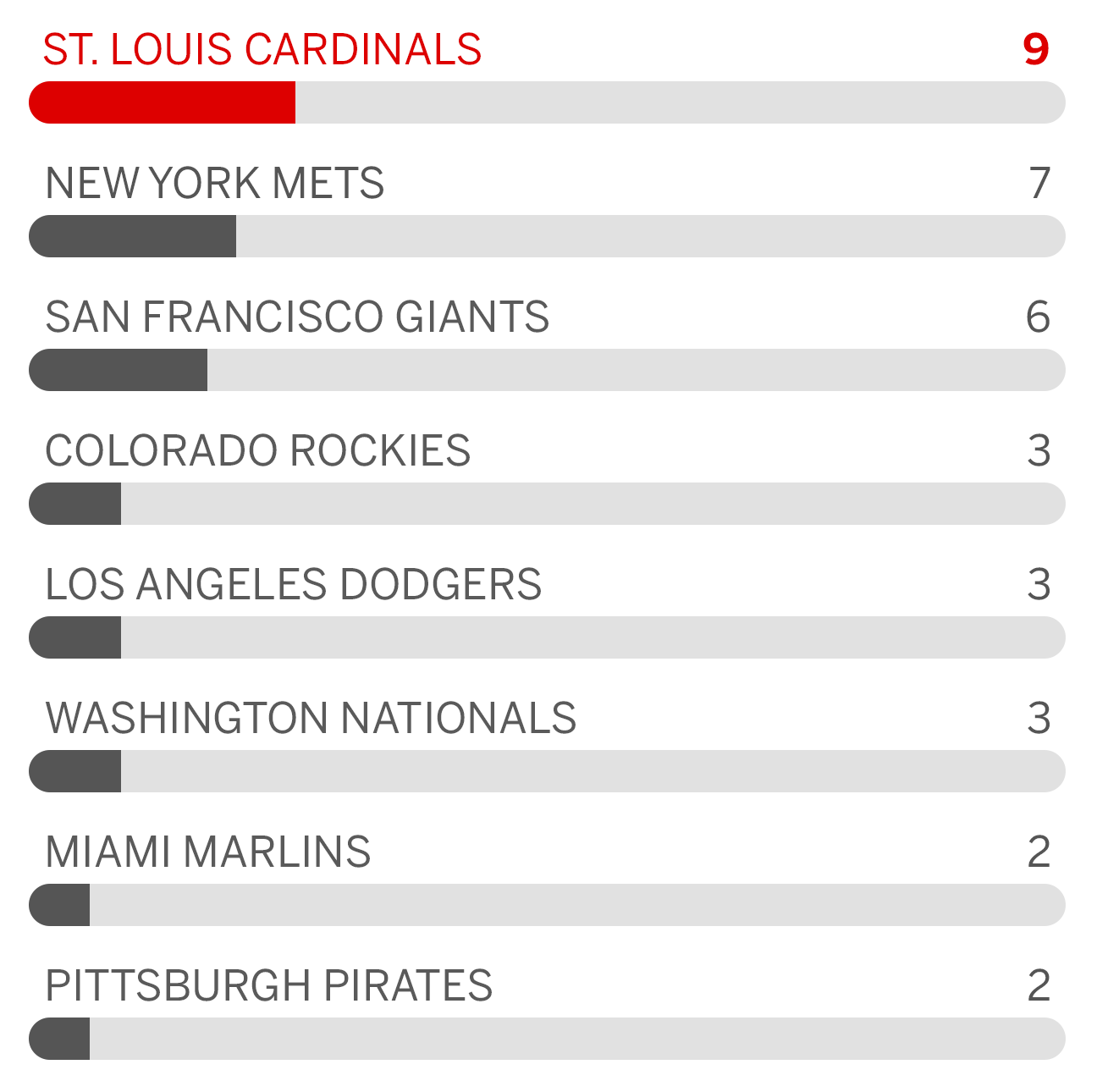 Jesse, only five people picked the Rockies to make the playoffs. Why are you one of them?

Their offense is there already and I think their rotation is ready to take the next step. Each of their starters -- led by Jon Gray -- has upside, and not just away from Coors Field. Learning how to pitch there is key and their young staff has some experience now. The Rockies will be the surprise of the NL. -- Jesse Rogers 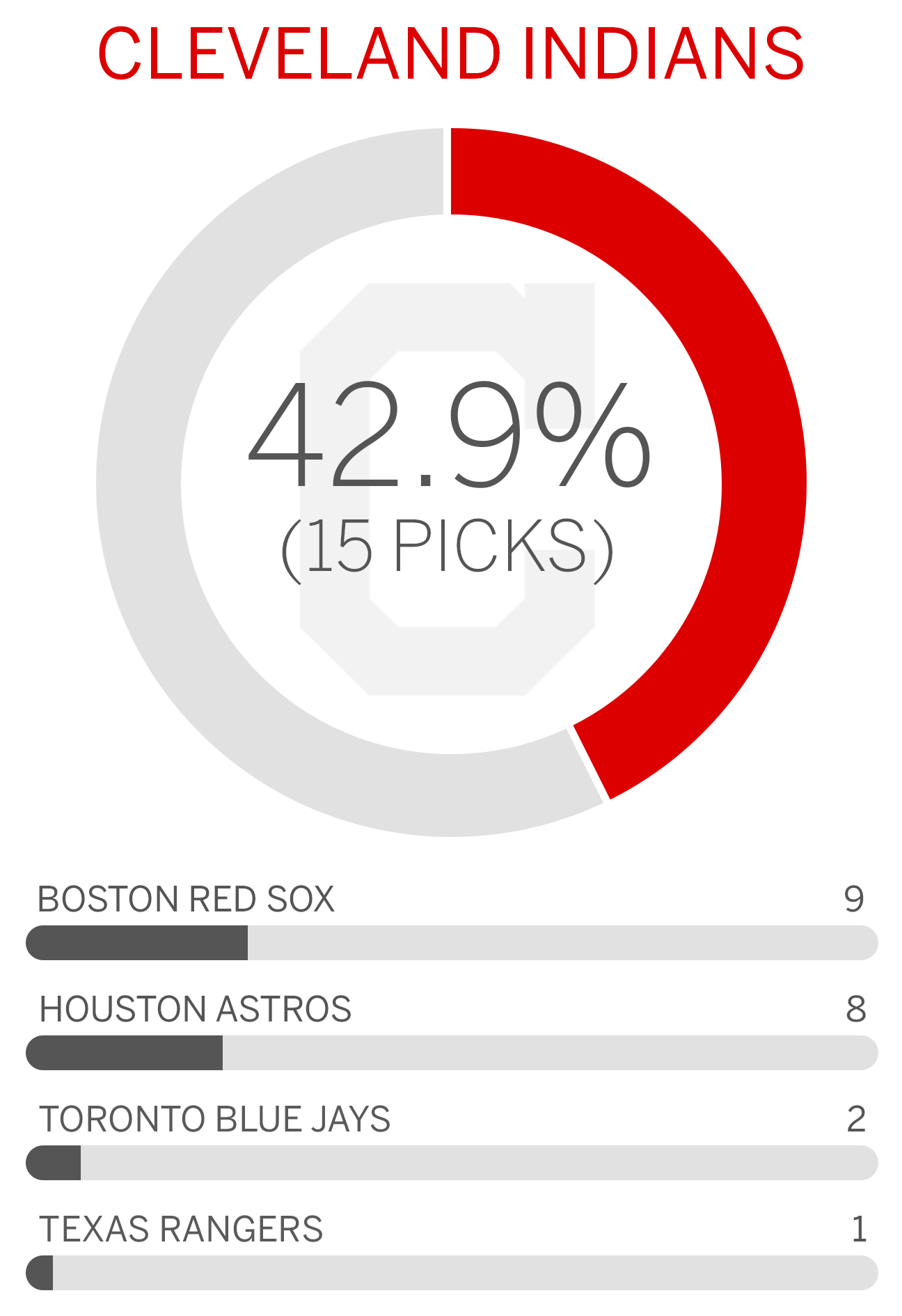 Jayson, you're higher on the Blue Jays this season than most of our voters. Why?

Everyone in their rotation had a GREAT spring. Marcus Stroman was the WBC MVP. Francisco Liriano was a swing-and-miss machine. Aaron Sanchez could win the Cy Young. Marco Estrada might have the best changeup in baseball. And J.A. Happ looks exactly like he has looked for the past year and a half. Most underrated rotation in the league. Also, any team that has a clubhouse core built around Josh Donaldson, Troy Tulowitzki, Russell Martin and Jose Bautista is going to be into it. Every inning. Every at-bat. Every pitch. Every day. Every week. From start to finish. This team plays with an edge many teams lack. -- Jayson Stark

Andrew, the Indians and the Red Sox were the most popular picks to win the AL. Why are you going with the Astros?

The Astros did a good job of adding veterans such as Beltran and McCann to their young nucleus. The question is: Can they pitch enough? I say they will and Houston will be the place to be in late October. -- Andrew Marchand 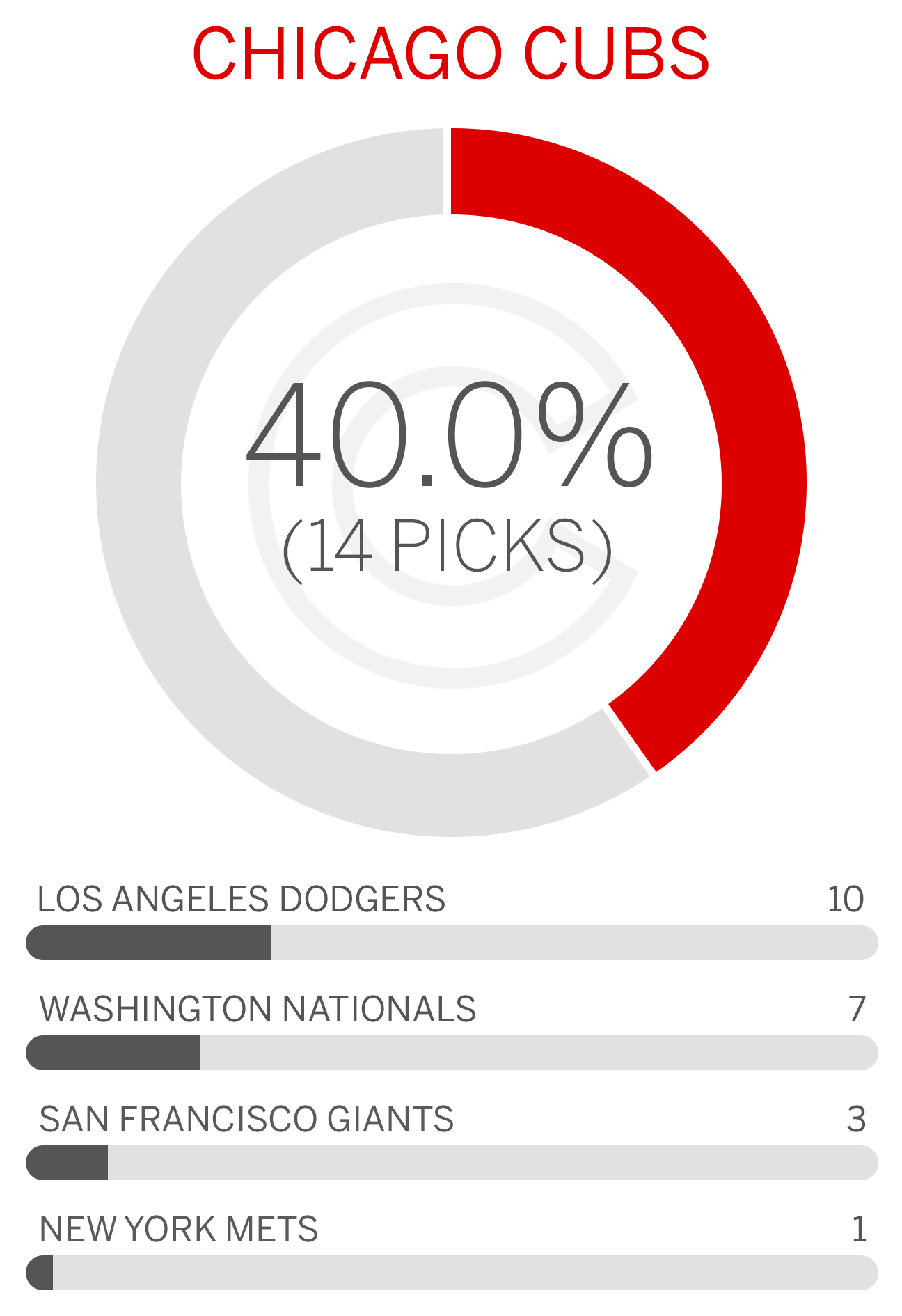 Jerry, the Cubs remain the favorite to win the NL. Why are you picking the Dodgers?

The Cubs are a dynamo, and the obvious choice to go to the distance. But the Dodgers won 91 games last season and extended Chicago to six games in the NLCS despite using 31 pitchers and sending 28 players to the disabled list. Yes, the health of the starting pitching is tenuous. But Hyun-Jin Ryu's return allows Julio Urias to begin the season in the minors and gives the Dodgers a potential second-half weapon. Dave Roberts proved that he's adept at steering his team through the rough patches on his way to the NL Manager of the Year award in 2016. -- Crasnick

Sarah, you're the only one picking the Mets to win the NL. Why?

If the Mets' pitchers stay healthy -- a phrase we've been hearing for at least two years at this point -- I don't see any reason they can't ride through the playoffs. The Mets didn't really upgrade their offense in the offseason. But keeping Yoenis Cespedes was huge, and a healthy Neil Walker -- if he's the Walker we saw early last season -- could be enough on offense. I think Michael Conforto could be the linchpin for this team. If he gets the chance and shows he has learned how to hit lefties, then the Mets will have upgraded their offense just by playing him every day. If the Mets can come up with enough offense, that pitching should be able to carry them deep into October. -- Langs 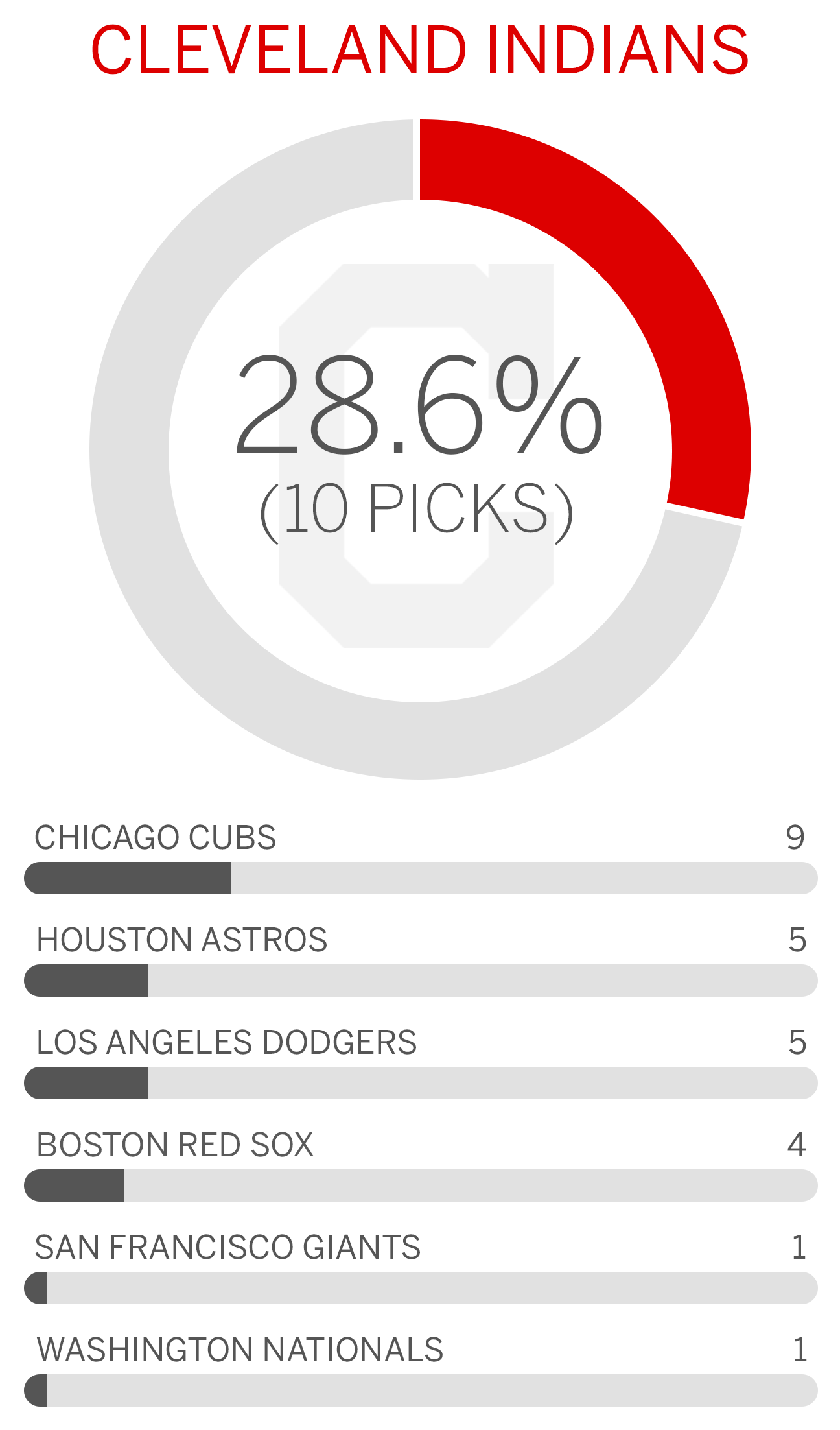 Sam, the Indians are our experts' World Series favorite this season. Why are you picking them?

No team has an easier path to the postseason than Cleveland, with four division rivals that might struggle to win 75 games in any other division. When they get there, they'll have just about the best postseason roster you could build on a budget: three hard-throwing, top-of-the-rotation starters; two bona fide relief aces; and a loose, imaginative manager who has shown the perfect balance between steadiness and urgency in October. -- Sam Miller

Brad, the last team to repeat was the 2000 Yankees. Why do you think the Cubs can do it?

With a roster of unmatched depth, balance and versatility, the Cubs have no weaknesses. Any concerns over team defense or starting pitching will almost certainly be mitigated by the upward arc of their best hitters and a full season of Kyle Schwarber. And those concerns about the innings their starters have thrown? Could be a fly in the ointment, or it could be that they are just really durable. -- Bradford Doolittle

Dave, you're the only one picking the Nationals to win the World Series. Why?

No team has more front-line talent than the Nationals -- and they won 95 games last season with Bryce Harper falling way off his 2015 MVP numbers. Trea Turner looks poised to explode into one of the best players in the league, and newcomer Adam Eaton is one of the most underrated all-around stars in the game. Yes, they'll need Stephen Strasburg to be healthy in October (he has made just one postseason start in his career) and somebody to step up as closer (Koda Glover could do it), but there's also this: Dusty Baker is due for breaks in October. He gets his first title ... and election to the Hall of Fame. -- Schoenfield