Nationals outfielder Bryce Harper spoke with reporter Stacey Pressman about expectations for the Nationals' season, how he prepared this winter, and what it was like to take it all off for ESPN The Magazine's Body Issue. For more from the 2015 Body Issue, check out espn.com/bodyissue! And pick up a copy on newsstands starting July 10.

I worked hard this offseason to get my body where I needed to get it because, finally, I wasn't hurt. I was able to work every single muscle in my body head to toe. In 2013, I had the knee injury; the year before that, I just wasn't healthy. Now, I feel great. I feel light. My body feels pretty unbelievable.

Everyone has talked about the Nationals as the World Series favorites this season. That's pressure enough. But we're not trying to live up to what other people think. We go into every single clubhouse and we think we're going to win every single game we play. 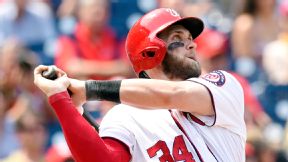 Still playing hard but playing smart is where I need to be. I look back on certain things that I've done ... we were winning 6-0 [in a 2013 game against the Dodgers], and I ran into a wall -- why? There's no point. Last year, I slid into third base on a bases-clearing triple. [Harper tore a ligament in his left thumb during the 2014 play that required surgery.] It's like, if you had stayed on second base, you're still playing the whole year and helping your team win. I've got to be smarter, definitely.

I'm about 8 percent body fat right now. I think the lowest I'd been was 13, so it's pretty special. I'm down to 208 from 240 -- actually back where I was in college. I sat down with [Nationals shortstop] Ian Desmond at the end of the year, and he told me: "You don't need to be that big. Be as limber as you can. Be as flexible as you can." And that's the way Ian is -- he's like a boxer. Ripped as can be, works hard, but doesn't pick up that many weights. It's more body-weight stuff. So I really listened to him; I'm right where I need to be, and I'm excited.

Sleep is huge. That's your biggest way of recovering. In baseball, it's such a hard sleep schedule during the season, but you try to do the best you can. Because you can take all the protein drinks, you can do all these things, but your recovery is your sleep.

Having a good swing is all about your legs and core. You really have to have a good foundation. If you look at your legs, your forearms, your wrists and your core -- those are the top three or four things you really need. I spend about an hour a day on core.

I wish my abs were a little bit better. God gave me a great body, but I think my abs could be better than they are.

Either you put crap into your body and you feel lazy all day, or you put good stuff into your system and you feel great every single day. During the season, I'm always with [Nationals outfielder] Jayson Werth, who's very good with all of his food. He's gluten-free. He's like an older brother to me, and he'll have his meals packaged and sent to him when we're on the road. So I'll go up to him in the kitchen and say, "Hey, you got any extra? What do you got?" He'll be like, "All right, kid, go grab it."

My mom's cookies are unbelievable. So what I do: I'll put the cookies inside the microwave for, like, 12 seconds. It's got to be 12 seconds. And then I'll grab the ice cream and I'll make an ice cream sandwich. And I mean it's unbelievable. I have my cheat days.

There's nobody as sexy as [Robinson] Cano in the box. I had a coach, Chris Sheff, who always told me to be as sexy as you can in the box. And, I mean, if you look at Cano ... that guy has one of the smoothest, best swings I've ever seen. Manny Ramirez is the same way. It's a lot of fun to watch. So, when I get into the box, I just try to be as smooth as I can.

Yasiel Puig has one of the strongest arms I've ever seen. He plays the game as hard as anybody; I absolutely love the way he plays. You look at certain guys, also like Mike Trout or Andrew McCutchen, and you just go, "Man, that guy's got it."

Baseball's a feel game. So many guys -- and I get this way also -- try to look at video. They think, "I need to change this," "I need to change that," and don't just play the game. That's what Derek Jeter always used to say, too: Try to feel the game. Feel where your swing is; where your arm slot is during a ground ball. That's what got you there.