DENVER -- About 15 minutes before Shohei Ohtani made the most anticipated debut in Home Run Derby history and kicked off the madcap 24 hours in which he also would start the All-Star Game as a pitcher and lead off as designated hitter, Trey Mancini walked aimlessly in foul territory at Coors Field. Mancini had won his first-round derby matchup and worried he wasn't ready for the next one.

"I don't know if I should be preparing," Mancini said. "But I don't want to miss Shohei."

This is what Shohei Ohtani does. He reduces men who are the best in the world at what they do to fanboys. He turns fans who can't conceive of what he does to putty. He takes the idea that Major League Baseball isn't cool or interesting or fun and renders each of those conceits moot with his play alone. He takes the limits of sporting achievement to the precipice -- and sometimes beyond what we considered possible. He takes a world so big -- from his home country of Japan to the United States to nations beyond -- and shrinks it to a 5-ounce orb that he can hit 500 feet and propel at 100 mph.

To understand what Ohtani is, why he matters and how he represents the world of sports that can bring together this country like nothing else, days like Monday are important. Because even if the top-seeded Ohtani did lose in an epic, first-round derby matchup against Washington Nationals star Juan Soto, the reactions of those who bore witness -- from his peers to Ken Griffey Jr. to the more than 50,000 fans who packed the stadium to the millions of others that watched -- told a far greater story than Ohtani ever could with his words.

If sports teaches us anything, it's that people's actions often matter more than their voices -- that the mere idea of Ohtani doing what Babe Ruth did in the major leagues, what Double Duty Radcliffe and Bullet Rogan did in the Negro Leagues, is special, and that doing it in an era when baseball players are more talented than they've ever been is otherworldly. Stephen A. Smith on Monday morning tried to make the argument that Ohtani's use of an interpreter to communicate with the media limits the audience he and baseball can draw. It was ridiculed rightfully and immediately, and Smith later apologized, which was good, because Monday night disproved the entire premise.

Nobody tunes into a sport to listen to what athletes have to say. It might be important, it might be noble, it might be righteous, but it is not the draw. The athlete is. What he does is. What she achieves is. Anybody who chooses to watch baseball only if Ohtani addresses the media in English instead of Japanese doesn't deserve the joy and pleasure of watching him.

What Ohtani displayed Monday perfectly illustrated a skill set so alluring, a vibe so intoxicating, a tale so unique to sports that anyone watching couldn't help but fall in love. Early in the day, he sat on a dais announcing the game's starters and basked in admiration of Max Scherzer, the future Hall of Famer and his National League starting-pitching counterpart. Ohtani tried to contextualize what he was doing, but how can anyone when it's so singular? 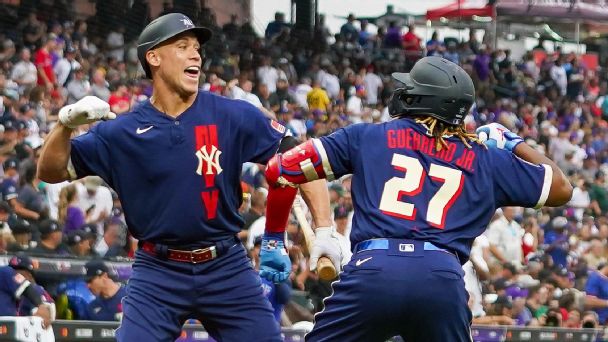 Here's what happened at this year's Midsummer Classic festivities in Denver. Complete coverage from Coors Field

If Ohtani's ability to hit and throw with equal eminence is the most impressive thing about him, his demeanor isn't far behind. As he struggled during his first major league spring training in 2018 and scouts picked apart his swing and writers -- yours truly, misguidedly, at the forefront -- wondered whether he could actually play both ways, Ohtani never lost faith, never lost sight of who he is, how he operates, why he believes. His is a legend of excellence, yes, but it's also one of perseverance. It's no wonder, then, that as Mancini led off the derby, Ohtani rested on a Gatorade cooler, his bat between his legs, talking and laughing with Ippei Mizuhara, his interpreter and confidant. The entire stadium came to see Ohtani. The world tuned in to watch him. And he just cracked jokes, like the weight of a few million eyeballs was featherlight.

When Griffey, perhaps the last baseball player with near universal appeal, approached to introduce himself, Ohtani said: "Nice to meet you." He does speak English, by the way, and did in a pre-derby phone call with his friend and former teammate Albert Pujols, who wanted to offer some advice. Really, though, what advice could Pujols, Junior or anyone offer that Ohtani already doesn't know? He is 27 years old and had his adoptive country captivated and his home country rapt and here he was, as Soto finished his first round, cool enough to slink down into the tunnel beneath the dugout, grab a Glacier Cherry Gatorade Zero, take a swig and ask his pitcher, Jason Brown, "Ready?" Brown nodded. Ohtani smiled. It was time.

"That's who he is," Brown said right before heading onto the field. "This is what he does every day."

Then it happened. He hit one home run, then another, then another. He took a timeout and fielded a call from his teammate and longtime holder of the Best Player in the World title, Mike Trout. Ohtani returned reinvigorated and launched home runs high and far and deep into the muggy night. His left-handed swing -- front toe angled inward, hands looping into a loaded position, hips firing faster than a whip crack, barrel meeting ball, moon shot commencing -- found Brown's meatballs particularly tasty. Before the three-minute clock ran out, the final two of Ohtani's 16 home runs went 513 feet and 500 feet.

He collapsed on his hands and knees. Ohtani had earned a minute of bonus time, during which he would tie Soto with 22 homers, but it was clear he was gassed. Soto hit six in the minute-long tiebreaker round. Ohtani looked primed to beat him but missed his final three swings and wound up stuck on 28 too. Two of the most powerful hitters in baseball were going tit for tat. It was mesmerizing. And it went to a swing-off.

Soto blasted home runs on all three pitches. Ohtani needed to match him. He rolled over the first pitch. Almost immediately, Vladimir Guerrero Jr. and Fernando Tatis Jr., two of the game's biggest young stars, walked over to dap and hug Ohtani. They're from the Dominican Republic, and they understand the challenges of coming to the United States, to a sport filled with people inside and fans outside who still have not embraced the notion that this is a global game. The Dominican Republic and Japan are thousands of miles apart, but their experience in baseball is shared.

On Monday night, Ohtani put on a show. He didn't win like Pete Alonso, and he didn't hit as many home runs as Mancini, and he didn't beat Soto. And that really didn't matter. Because amid a frightening time in America for people of Asian descent, when so many have been subjected to reprehensible violence and mistreatment, Shohei Ohtani, a Japanese man, started his unprecedented, 24-hour stretch playing America's pastime with a bang. English, Japanese -- it doesn't matter the language. There's only one word for Ohtani, and it's not up for interpretation: amazing.