Some day, I'm sure, I'll receive a heartfelt thank you note from the Chicago Cubs for not picking them to win the 2016 World Series. Hey, you're welcome.

It would have been easy. After all, 2016 is the Year of the Cubs. Everybody knows that. But I made up my mind months ago that it didn't matter.

The Cubs could have gone out this winter and added David Price, Zack Greinke, Craig Kimbrel, Miguel Cabrera, Mike Trout and Babe Ruth. I was not going to pick them. Never. Ever. For two excellent reasons:

One is: I'm a curse. I've spent the past decade proving I can't predict what time noon hits. So as I imagined how their season -- and my life -- would unfold after I picked the Cubs to win it all, I saw the future way too clearly. That historic 24-game losing streak for them. Those historic 14 trillion tweets from Cubs fans aimed at me, dumping me into the same Human Curse pit where Steve Bartman and that goat reside. So why? Why would I do that -- to them or to me?

Which brings me to Excellent Reason No. 2 -- and you might want to note this before you head for the nearest Vegas sportsbook: The Cubs are not the best team in baseball.

It's true. Because the Toronto Blue Jays are.

So I'm (incorrectly) picking the Blue Jays to win the World Series. And I'm not even going to feel guilty about it. For that, I can thank new general manager Ross Atkins, who, when informed I was about to curse his otherwise awesome team, replied, "I've never been a superstitious person."

Wow. Good answer. I'll be printing it on my business cards. And if he really believes that, it means I'm golden. If the Blue Jays do win, I'm a genius. And if they don't, I'm already officially absolved, by one proper authority, of any blame whatsoever. Beautiful.

And out there in the rest of the continent, the Mets, Giants, Nationals, Cardinals, Rangers, Royals and Astros can rejoice. I thought about picking every one of them to win, but I spared them. So they now can plunge into the season, knowing they're not doomed. Not by me anyway.

It wouldn't shock me if any of them threw a parade this fall. And if they do, they're also free to thank me, by the way. But I have my reasons for picking our friends from north of the border. So here they come: Five Reasons the Blue Jays Will Win the World Series.

1. Because they can totally mash

There's more to the Blue Jays than the crooked digits they splatter all over the scoreboard. But we'll get to that other stuff in a moment. Because every conversation about the Blue Jays begins the same way: Can these guys hit, or what?

A few fabulous tidbits about their lineup:

OK, we should probably mention a couple of things here. First off, in the wild-card era, only four teams (2013 Red Sox, 2009 Yankees, 2004 Red Sox, 1998 Yankees) have led their league in runs scored and won a World Series in the same season. So file that away.

And second, just because the Blue Jays lit up the board at that level last year doesn't mean they'll do it again. Except that they're adding a full season of Troy Tulowitzki, coming off a great spring, to the band this season. And both Baseball Prospectus and FanGraphs project the Jays will lead the major leagues in runs scored again, though not by the same margin.

So whatever. Offense isn't going to be a problem. Agreed?

"Their offense is so good, it's ridiculous," said an executive of one contender. "There are certain pitchers that can get them out. But most pitchers can't. And you can't throw any left-handed pitcher against them, because they just kill any lefty. I don't care how good you are. So they're the last team you want to play in a postseason series."

2. Because they catch everything

If you think that all this team does is mash, you need to watch more than SportsCenter highlights. Actually watch them play sometime. Watch them work their defensive magic night after night. If you don't, you're missing something -- because this is one of the best collections of leather workers in the major leagues.

Which team ranked No. 1 in the entire sport last season in defensive efficiency -- meaning the percentage of balls in play that were converted into outs? That would be the Blue Jays.

Which team led the American League in "Good Fielding Plays?" Right. That would be the Blue Jays.

Want to guess the only team in baseball that wound up with positive defensive runs saved at all four up-the-middle positions, according to Baseball Info Solutions? That would also be the Blue Jays.

And which team finished second to Kansas City in the American League in total defensive runs saved? Right. That, too, would be the Blue Jays.

The Blue Jays start five guys who could star in a How to Win a Gold Glove instructional video -- the catcher (Russell Martin), third baseman (Josh Donaldson), shortstop (Tulowitzki), second baseman (Ryan Goins) and center fielder (Web Gem machine Kevin Pillar). And according to Dan Szymborski's 2016 ZIPS projections, the only spots where they won't have an above-average defender: first base (Justin Smoak) and right field (Jose Bautista).

But Smoak actually rated as above average last season (with plus-four runs saved). And Bautista's minus-two marked the first season in his career in which he finished a season in right field with a negative figure in defensive runs saved. So they're far from major liabilities.

"Because we're making so much noise with the sticks, everything else was kind of in the shadow of that," Martin said. "But our defense was just supreme. I can't think of another team that's better than us. Kansas City was definitely up there. But I think we're right up there with them."

And you know what the metrics prove? He ain't bragging. He's right.

But "I can tell you," Stroman said, "that the mentality of this group is different than most groups."

And you know the difference? We'd describe it this way: star power, but without the star mentality. And that starts with the MVP.

"The thing I try to bring to the table," Donaldson said, "is, everybody's equal here. This team has bona fide superstars on it. ... But it's one of those things where you want everybody to feel connected."

From the outside, this team may look like a giant hodgepodge of big names. But when you see it up close, Atkins said, "it doesn't feel that way at all."

Until he was hired away from Cleveland over the winter, all the GM knew about these players was what he perceived from afar. But now he knows this is not your average super group.

"The environment here is palpable," he said. "And it's all about winning."

What separates the great teams from everyone else is more than talent. Those teams understand that every day in baseball matters. Every inning. Every play. Every at-bat. The Royals get that. The Cardinals get that. The Giants get that. And the Blue Jays exude that quality.

"Everybody is all in every day," said reliever Drew Storen, another newcomer who has been blown away by what he has seen. "Everybody is talented. And everybody knows the game. ... You look at this team on paper, and it looks great. But when you're in here every day, you can see through stuff. And there's nothing to see through. It's awesome."

4. Because their strengths minimize their weaknesses

I'm not going to pretend this is the perfect team, because it's got its issues. But what the heck. What team doesn't?

OK, so David Price doesn't work here anymore. But this club looks at Stroman and sees a guy ready to take that leap into acehood. And why not?

He's 14-6, with a 2.91 ERA and 1.09 WHIP, since he joined this rotation on May 31, 2014. The only other starters who match or beat his win total, winning percentage, ERA and WHIP since then are Clayton Kershaw, Jake Arrieta, Zack Greinke and Gerrit Cole. Whoever they are. And you have to spend only five minutes around Stroman to realize he has no fear of trying to live up to the pressure of joining that echelon.

But he needs help. And behind him, the Blue Jays have now slotted Stroman's best bud, Aaron Sanchez, a 23-year-old right-hander with a 1.35 spring ERA and the arsenal to be a star.

Sanchez is a potential October difference-maker if the Blue Jays can figure out a way to conserve his innings. And their win-it-all dreams could hinge on that. The rest of this rotation (Marco Estrada, R.A. Dickey and J.A. Happ) won't remind you of the Mets, but at least -- with Gavin Floyd, Jesse Chavez and Drew Hutchison lined up behind that group -- "we have eight [rotation] options we can feel good about," Atkins said.

As the Royals taught us last October, though, it isn't mandatory to have a dominating rotation to win the World Series. Not if your team can cover that "fault" in other ways. And that's exactly how this team is built.

Even without Sanchez, the back of this bullpen should be excellent, with Storen, Roberto Osuna and Brett Cecil. There's usable depth everywhere except catcher. And have we mentioned in the past 30 seconds that this lineup is a fireworks show waiting to happen? Never forget that when you have an offense this spectacular, it obliterates all sorts of other issues.

"How many games a year do the Blue Jays just kill people?" asked the same exec quoted earlier. "This is a team that's going to have a lot of easy wins. And when you're winning 10-3 or 17-1 a couple of times a week, it's easier on your bullpen. It's easier on the entirety of your team. To me, there are two teams in baseball that have an area of strength that's strong enough to carry their team regardless of anything else that happens. One is the Mets' rotation. The other is the Blue Jays' offense."

5. Because the scars of last October haven't healed

"The environment here is palpable. And it's all about winning." 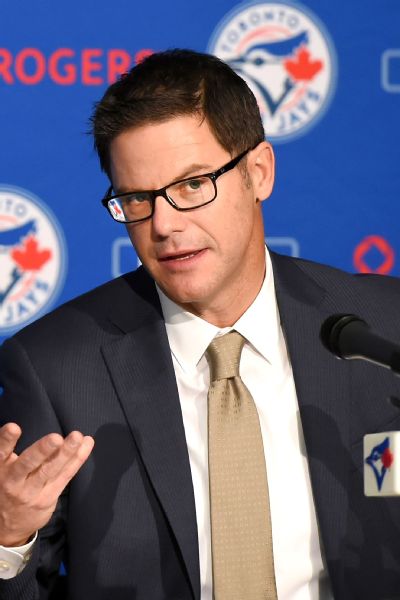 And for a club populated largely by players who were never supposed to have the careers they've carved out for themselves, those memories are just stoking an engine that was already revving.

This is more than merely a team that hopes to win a World Series. It talks about winning a World Series -- and believes that when you talk that talk, it helps you take that walk.

Think it's a myth that October pain one year can fuel a World Series run the next? Ask the Royals if it's a myth. They were the sixth World Series champs in the wild-card era that built championship runs off a rough postseason exit the year before. (The others: the 2008 Phillies, 2006 Cardinals, 2004 Red Sox, 1998 Yankees and 1996 Yankees.) So it happens. And the 2016 Toronto Blue Jays are on a mission to make it happen here.

"We believe we have a special team, and we have unfinished business," Donaldson said, "to go out there and hopefully finish where we came up short last year.

"We have a good team right now. But at the end of the year, we want to be known as a great team."

And what do they have to do to be known as a great team? Just win that World Series I've so brilliantly picked them to win. And if they can overcome the stigma of getting cursed by me, then who knows? I might even muster the guts to pick the Cubs one of these centuries.