BRADENTON, Fla. -- The numbers that define Carlos Correa can't be calculated on your hard drive. Don't contain a single decimal point. Won't be found on any "league leaders" list.

That's because the two numbers that define the Houston Astros' mesmerizing young shortstop are No. 3 and No. 1.

No. 3? That's where he hits in the batting order -- for a team with win-the-World-Series aspirations. At 21 years old. Amazing.

And just wait until you hear the legendary names who have done that at his age. Even more amazing.

Then there's No. 1. That's the number he wears on his back. We'll let him tell you why he wears it in a minute. But to those of us who watch baseball closely, it feels like a number that sums up where this guy is heading someday. And soon.

If he isn't going to be the No. 1 player in this sport, he'll be part of that debate. Yeah, even in a world that has Mike Trout and Bryce Harper living, and playing baseball, in it.

Let's start here: At 21, Correa already has done something that had never been done. Last year, he became the first American League player to win a Rookie of the Year award after being selected with the first overall pick in any draft. (Only Harper, Darryl Strawberry and Bob Horner have ever done that in the National League, for that matter.)

But ask him if winning that award has changed his life, and Correa replies, as coolly as ever: "It has changed. But it hasn't changed me."

You don't meet many 21-year-olds who talk the way this guy talks, or glide around a diamond the way this guy does, or handle every traffic jam on baseball's highway with the ease and composure Carlos Correa seems to summon. But that, of course, is the essence of what has gotten him to this place.

"He kind of carries himself like he's been in the big leagues for 10 years," teammate Jake Marisnick says. "He does everything the right way. It doesn't come off as a cockiness. It comes off as a confidence. That's a goal a lot of guys are trying to accomplish. But he's doing it at age 21."

And that explains what he's doing hitting in the No. 3 hole for a team like this, even though, if we started compiling the names of all the people on earth who are older than he is, it would include "old-timers" ranging from Buddy Hield to Ariana Grande. But "21" isn't the only number that defines him. So let's play that numbers game. And how can we not start with ...

Before we get into how Carlos Correa wound up in that No. 3 slot, let's put what it means to find him there in a little perspective.

So ... get the picture? We're talking about quite the star-studded group.

We run through some of those names with Correa, as the March sunshine pours down on him on a golden spring training morning. We ask what it means to hear his name on a list with names like those -- every one of whom went on to be an icon in this sport.

"It really means a lot," Correa says, earnestly as ever. "Seriously. It's really humbling to be on that list."

But it isn't as if Correa will be entering some sort of uncharted territory when he lands in the 3-hole on Opening Day -- because he has done it before. In fact, he was still only 20 when his manager, A.J. Hinch, first anointed him to hit there last June.

Correa then hit third for the next 79 games, plus five more in the postseason. During which he became only the third player to bat third in a postseason game at his age. The others: DiMaggio ... and Mickey Mantle. Does this dude hang out in some cool groups or what?

After two decades in the game as a player, manager and front-office executive, Hinch understands exactly how rare it is for any manager to build a lineup around a 21-year-old. He has done plenty of research of his own. He looked at Andrew McCutchen. And Justin Upton. And Bryce Harper. And Alex Rodriguez. Let's just say this isn't how they started.

"For the most part, they weren't thrust in the middle of the order," Hinch says. "But for us, the situation called for it. And he could handle it."

The amusing part of that decision, though, is that, after doing all his research on other young stars, Hinch's full intent was to do the precise opposite. He was determined to take every step possible to turn down the heat all around his own phenom. And so, on the day the next face of the Astros arrived in the big leagues, Hinch called him into his office.

"And that," he says, laughing at the absurdity of it, "lasted about three days."

Yes, by his third game in the big leagues, Correa was already hitting fifth. And then second. And then, by the time his big-league career was three weeks old, he was the No. 3 hitter. Because of course he was.

"When I saw my name [third] in the lineup for the first time," Correa says, "I was like, 'Whoa, Skip. Did you mess up something with the lineup?' But he trusted in me, and he hit me third. And I think it turned out pretty well, not only for me but for the team."

So why did the manager make that U-turn as quickly as he did?

"It took me 72 hours to figure out he was a middle-of-the-order hitter," Hinch says. "It was so funny. ... I told him, 'Remember what I told you in Chicago?' He said, 'Yeah.' I said, 'Forget everything I said. You're hitting in the middle of the order now.' He said, 'You've got it. Put me wherever you want.' "

From the moment Correa stepped into a big-league batter's box, he just had that "presence," Hinch says. And a "command of the strike zone at an early age." And an "ability to hunt pitches to do damage on." So what, the manager decided, was he waiting for?

"The moment was never too big for him," Hinch says. "And the responsibility of hitting in the middle of the order, in the first couple of months of his career, never fazed him. So I saw no reason not to lean on him in that way."

Notably, that word, "responsibility," is one Correa has never tried to deflect. Did he know he was ready to hit third, so soon, for a first-place team? Of course not. But when his manager told him he was ready, "I felt like he trusted me," Correa says. "And it gave me the confidence to hit third."

So now, as he prepares to do that for a full season, he has a chance to place himself in yet another special group. He has already started 79 games as a No. 3 hitter. And the Astros will play another 152 this season before Correa turns 22, on Sept. 22. So if he just stays healthy, and keeps on doing what he has been doing, he is likely to become only the second player in the live-ball era to start 220 games in the 3-hole before his 22nd birthday.

Who was the other? It was The Natural from a previous generation, Griffey. Who started 230. For the record, if Correa starts every game, he could actually reach 231. But we'll get back to you on that. In the meantime, we have one more number to talk about ...

It's only a number. Only a number stitched into the back of his uniform. But it's not just any number. Not to Carlos Correa.

"He kind of carries himself like he's been in the big leagues for 10 years. He does everything the right way. It doesn't come off as a cockiness. It comes off as a confidence. That's a goal a lot of guys are trying to accomplish. But he's doing it at age 21." 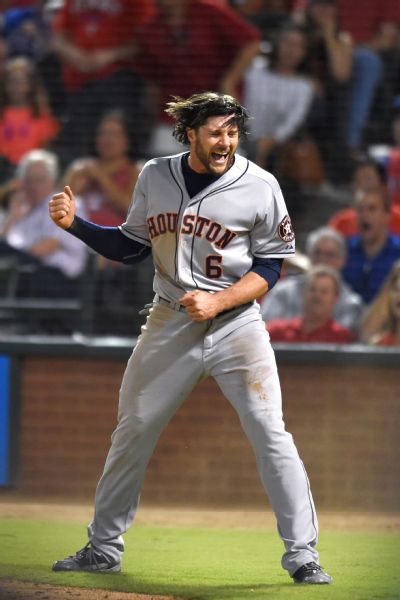 "But the true meaning of it," Correa says, eloquently, "is just working for more, striving for more, wanting to be one of the best out there."

He began wearing No. 1 in the minor leagues. He always intended it to be more than simply another number on the scorecard.

"It was just a reminder," he says. "Every time I walked to my locker, I see No. 1. Just to focus on what it takes to get there, to be one of the best guys out there. Every time I walk to my locker and look at my number, it reminded me of how hard I needed to work and all the effort that I had to put in to become one of the best players in the league."

Well, if he isn't there yet, he's off to a historic start. His next game in the big leagues will be his 100th. But in the 99 he played last year, he served up 22 homers and 45 extra-base hits. Only five players that young in history ever hit that many home runs in their first 100 games. Yeah, five. And only three had more extra-base hits. Yeah, three.

Oh, and how many shortstops have ever matched or beaten those numbers in their first 100 games? Right you are. None.

So why are people starting to nudge Correa into the Trout/Harper pantheon? Um, that's why. And for the man in the middle of that discussion, that conversation is just one more motivation to get there. To be better. To play better. To do more. To win more.

"You know, those are things I visualized in the minor leagues," Correa says. "I watched these guys play in the big leagues and I see how good they can play. And I visualize myself, with all the work I'm putting in, in that type of position. For people to say something like that, it really means a lot. It's really an honor."

Yet what he talks about isn't what he has already done. It's what he still needs to do, because his story is just beginning.

"I feel I can run more," he says. "I can steal more bases. I can play better defense. I can hit for a better average. So I feel like I can do everything better."

But you know which word he mentions most? It isn't any of those words. And it isn't "I" or "me." That word would be "win."

"Sure, I have my own personal goals," he says. "But it's about the team. And winning."

Well, his team appears to be as ready to win as he is to ascend to whatever that next level is for onrushing 21-year-old superstars. But would we think the Astros were so ready if they weren't constructed around the kid with No. 1 on his back, hitting in that No. 3 hole?

"On this team," Hinch says, "we welcome all kinds -- including 21-year-old guys making their debut in the middle of the order on a playoff-caliber team."