"Hey," the longtime baseball executive on the other end of the line said, "I've got a new rock group for you: Freddie Freeman and the Who."

Freddie Freeman's band, also known as the Atlanta Braves, continues to perform shows daily at Champion Stadium. That will continue, whether or not you can correctly identify all the band members. But there was a time this baseball winter when even Freeman wondered if he'd be singing harmony somewhere else this spring.

That time came in mid-November. Reports started erupting all around Freeman that the Braves were talking about dealing their sweet-swinging 26-year-old first baseman to the Houston Astros. In this beautiful, connected world we live in, you know what that means.

Buzz, buzz, buzz went Freeman's phone, with texts from all of his plugged-in buddies.

"What are you guys talking about?" Freeman told them. "I'm not going anywhere."

He felt totally confident about that -- but not for long.

"Then they would, like, screenshot the article about the Astros," he said. "And next thing you know, I'm going to the Cardinals and this and that."

At that point, even a guy trying to tune all the trade noise out decided it was time to tune in. His first move was to text his agent, Victor Menocal, who checked in with Braves general manager John Coppolella, who then called Freeman. Here's Freeman's recollection of that conversation:

"He said, 'You know what, Freddie? People call the Angels about Mike Trout. It doesn't mean they're going to trade him. They're obviously going to see what they have to say, but he's not tradable,'" Freeman recalled while sitting in front of a locker containing a uniform that, miraculously, still said "Braves" on it.

"Coppy made that clear," Freeman said. "People have called about me, and they were listening. But you know all the front-office terms. They were listening but not really listening. He made it clear privately that I wasn't going anywhere. And then he came out publicly and said he'd give his right arm [before he'd trade me]."

Sources have told ESPN that those conversations were more real, in some respects, than the Braves have characterized them to be and that they went further than either team has acknowledged. But while Coppolella is reluctant to get into specifics, he remains adamant that the Braves were never close to trading Freeman and have never had serious interest in moving him.

"As a club policy, we don't want to talk about trade talks," the GM told ESPN, with his right arm still firmly attached. "But teams have asked about Freddie Freeman in trades. And I think what you are referring to is a case of that happening. But it didn't get anywhere, and Freddie Freeman is here to stay."

Freddie Freeman is here to stay.

These days, Coppolella croons that line more often than Taylor Swift sings, "I shake it off." It's no longer just another line. However tempted the Braves might have been by any offer they got for their first baseman in November, clubs that have spoken with them in recent months report that they're no longer even allowing themselves to go down that road.

"They'll trade anyone," one NL executive said, "except Freddie Freeman."

Maybe you're wondering: Why is that? The Braves traded Craig Kimbrel. They traded Andrelton Simmons. They traded Jason Heyward, Justin Upton, Shelby Miller, Evan Gattis, Alex Wood and, when you get right down to it, just about everyone on the diamond not named Freddie Freeman.

It's all part of a massive organizational renovation project that has restocked Atlanta's system with a bunch of high-ceiling prospects and positioned the Braves for an incredibly bright future. But while they wait for that bright future to arrive, even other clubs are still asking: Why haven't the Braves traded Freeman too?

"Freddie Freeman is our David Wright," he said.

He went on to compare the Braves' current position in the baseball universe to the place Wright's team found itself a few years back. The New York Mets might have unloaded Carlos Beltran, K-Rod and R.A. Dickey (among others). But when the rubble finally settled and stabilized, the third baseman remained. Nine-hundred miles to the south, the Braves were paying attention.

"For all the moves the Mets made, David Wright was their rock," Coppolella said. "Freddie Freeman is our rock. That's why you've heard me say over and over, 'I'd rather trade my right arm than trade Freddie Freeman.' We don't want to trade Freddie. Freddie has so much talent. Freddie's a great person, on the field and off the field. And he's a big part of what we're doing. I hope Freddie Freeman spends his entire career as an Atlanta Brave."

OK, but here's one more fascinating question: Why do the Braves feel they need a "rock?" They've already knocked down every other wall in the house. Why not just bulldoze the whole darned building to the ground and really rebuild as they point toward the opening of their new ballpark in 2017? 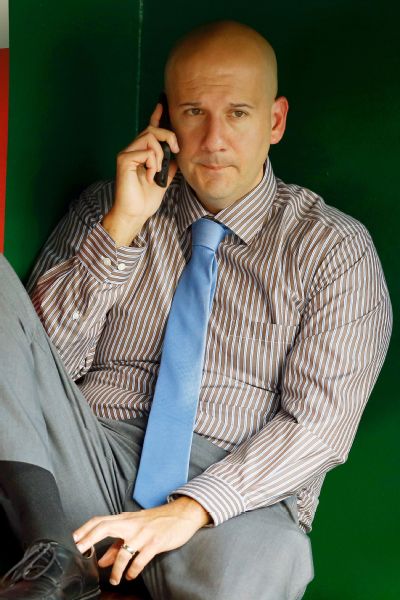 "We need more players like Freddie Freeman. ... If we traded away Freddie Freeman, we'd be looking for somebody like him, so we don't want to trade him. But more than that, we care greatly about our fans. And they need somebody they can identify with. You need to have that. The Braves had Chipper Jones. Before him, Dale Murphy. Before him, Hank Aaron. Now, Freddie is that guy for us."

But if he is, that's still a hard concept for Freeman to digest. He is only 26 years old, which means he is younger than players such as Tommy Pham and Tyler Saladino, guys who have just begun their climb on baseball's ladder. Even so, Freeman has already established himself as one of the most consistent young hitters in the game.

His 771 career hits are the fifth-most among active players his age. His .832 career OPS ranks fourth among active players age 26 or younger who have gotten at least 2,000 plate appearances. The three names ahead of him? Oh, only Mike Trout, Giancarlo Stanton and Bryce Harper, whoever they are.

You can understand why the Braves look at Freeman and see a pillar worth building around. But when his GM starts dropping his name alongside the greatest players in franchise history, Freeman shakes his head, trying to fathom whether he deserves that sort of praise.

He admits that on his way back up the tunnel of the Braves' spring home, he has stopped to take in the iconic names on the wall across from the clubhouse: Aaron, Spahn, Mathews, Niekro, Horner, Murphy, Jones, etc.

"Whew," he said. "I never really try to think about that kind of stuff."

What he does think about is all the friends with whom he came through this system. Guys he played with and won with. Guys he thought he was signing up to play alongside back in the spring of 2014, when he agreed to an eight-year, $135-million contract that remains the longest in the history of the franchise.

"You realize quickly what a business this is," he said. "When all the trades went down, you understand with a Jason Heyward and Justin Upton because we weren't going to be able to afford them and they only had one year left [before free agency]. But really, that's the first time I ever went through it -- having friends traded. And the personal side of it was definitely tough, but I see the business side of it more now."

It was that business side -- and the baseball side -- that Coppolella felt he needed to explain to Freeman when he dialed his number in November to douse the trade-rumor flames.

"Freddie Freeman is our guy," the GM said. "We wanted to make sure that he understands this process, that we aren't trying to turn this into some kind of fire sale. ...

Freeman listened hard. He thought it through. He decided he liked what he'd heard. Then he got to spring training, took a look at the Dansby Swansons and Sean Newcombs his team had traded for over the winter and decided he liked it even more.

He can't help but see the massive upside of the young players around him who comprise the "Who" in "Freddie Freeman and the Who." When the band leader says, "We're going to have a young, dynamic team for a number of years," it doesn't sound like a line he has been rehearsing for three months.

But if he's going to be The Rock for that group, there's a responsibility that goes with it. His team has made sure to drive that point home at every opportunity.

"We talked about it this winter," manager Fredi Gonzalez said. "I told him, 'They didn't ask me to go down to the new stadium and lay the first brick. The two people who were there were you and Hank Aaron. So that's what this organization thinks of you.'"

Now, halfway through spring training, Freddie Freeman obviously has gotten the memo. As leaders go, "I'm not very 'rah-rah-ey,'" he said. "That's not my personality."

But he can be a pro. He can be a worker. He can help the young guys who surround him understand how to play with focus and "the same level heartbeat." Most of all, he can explain exactly how good it feels to be a Brave.

"I just saw where Andrelton said that when you get traded, it's like breaking up with your first girlfriend," Freeman, a.k.a. The Rock, said. "And when you think about it, man, you think, 'Gosh, I thought I was going to be here forever.' And I hope I am.

"I just want to give everything I can to this organization. I'm just so thankful I'm still here."