But for some reason, the St. Louis Cardinals continue to hang on to this old-fashioned idea that they'd still like to go out and play all 162 games this season. Crazy, right?

"I don't get much into underdogs, favorites, who should do this or who should do that," said their longtime No. 3 hitter, Matt Holliday. "You've got to go out and play."

Yeah, sure. Might as well. But according to Vegas, according to America's most renowned computers and, most importantly, according to the Google search I just ran, this is The Year of the Cubs. That's official. Feel free to Google it yourself if you don't believe me.

All this Year of the Cubs stuff got me to thinking. What if you played for a team that won 100 games last season? A team that hasn't missed the postseason since 2010? A team that has won 17 more games over the past five years than any other outfit in the whole sport? And a team that, oh by the way, is still planning to play in the Cubs' division for the foreseeable future?

What would you be thinking if you played for that team -- and then showed up in spring training and found out, thanks to killjoys like me, that it was suddenly The Year of the Cubs? Which, if I'm understanding that concept properly, would also mean it must be The Year of Not Your Team?

Well, I know what I'd think. But I decided to ask a bunch of Cardinals what they think, which was way more entertaining.

"Last year, it was all about the Nationals," said the Cardinals' always-erudite third baseman, Matt Carpenter. "Nationals, Nationals, Nationals. They signed Max Scherzer. They were the team to beat. The projections were, the Nationals were going to win 100 games. And they didn't. So I don't buy into anything. It doesn't matter that it's the Cubs, or that they're in our division."

Right. Remember that. It doesn't matter. Except for one minor detail, that is. If everyone on earth, except for possibly Bob Gibson and the guy driving the Clydesdales, is going to pick the Cubs to win the National League Central, that would appear to mean those same people must not be picking the Cardinals to win the Central.

And that would seem like a bad thing for the Cardinals, correct? Unless, of course, we have that all wrong. Which, according to Brandon Moss, maybe we do.

We know the Cardinals are familiar with how that feels. Been there, done that, year after year after year. But the Cubs? Different deal. It wouldn't be accurate to say this is totally uncharted territory for their team. But let's just say 1908 does tend to come up a lot in their town.

So the Cardinals are happy to point out that last year, the Cubs were that team -- that "where did these guys come from" team. And they played that role beautifully. But does anyone know how they'll play in this Year of the Cubs role? The Cardinals clearly don't.

"With high expectations comes a lot of responsibility," Moss said. "Sometimes it's fun to just go out there and play baseball and let it all hang out and have fun, and look up at the end of the year and you're on your way to the playoffs. ... I spent three years doing that in Oakland. Every year, we weren't supposed to do anything. And every year, we were good. And it's fun -- because we just went out and played."

OK, am I allowed to interject here and say the Cardinals will never be allowed, by the proper authorities, to be cast in the part known as "Oakland" in that scenario? For one thing, they've played in 11 World Series since the last time the Cubs played in any World Series. So it would take at least a half-century of pathos, heartbreak and epic underachievement for us to think of the Cardinals as your basic, plucky, little underdogs, just playing for fun.

But for another thing, they're stuck in pretty much an inescapable link to the Cubs, regardless of who is supposed to be "the favorite." It's called The Rivalry. And after the Cubs beat the Cardinals in the NLDS last October, then went out and signed Jason Heyward and John Lackey, The Rivalry just took another big step -- toward Duke-Carolina territory.

"You can't win the World Series in the offseason. You win it on the field." 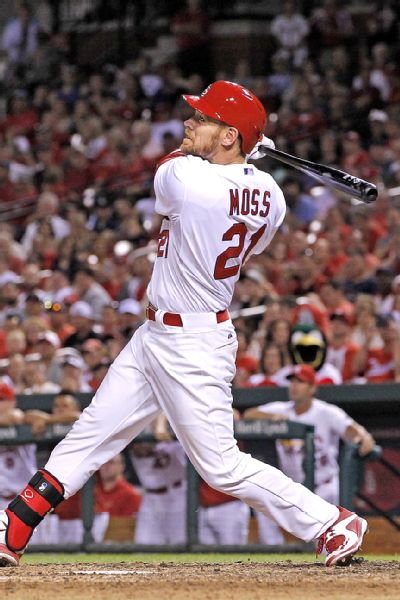 And that, I think we can agree, is awesome. After all, The Rivalry was fun even when the Cubs were busy finishing 31 games out (which happened as recently as 2013, incidentally). So now that there's something bigger at stake, it wasn't that hard to find a fellow wearing a jersey that said "Cardinals" on the front who was willing to say, as Carpenter did, that, "I think it's amazing for the game of baseball" to see this rivalry ascend to these heights.

But just because the Cubs are good and positioned to be great, you need to understand something about the longtime kings of their division. I get no sense -- none -- that the Cardinals feel threatened by the Cubs' rise in any way. That's just not how these guys roll.

"It would do us no good to go into the season scared because some other team is picked to win the division," Carpenter said. "If anything, it just puts a chip on your shoulder. You're excited. You want to go out and play, and prove your worth, and show teams that, 'Hey man, don't forget about us. We're still pretty good.'"

Write that down, will you? They're still pretty good. Even without Heyward. Even without Lackey. Even though they chased David Price but wound up signing Mike Leake.

And you know who else would like to interrupt this Cubs, Cubs, Cubs talk to remind the rest of civilization that the Cardinals are still pretty good? The manager of the Cardinals. That's who.

"The only thing that bothers me," said Mike Matheny, "is any disrespect that comes to our guys, and then the potential for it to become a distraction. What our guys were able to do last year, and how they fought [through relentless injuries] was one of the most impressive things I've seen over the course of a long season. And it's a shame that that gets overlooked by one series at the end."

Then again, that series was also known as "the playoffs." So Matheny understands why it comes up now and then. But when he was asked if he thought his team was, in fact, being disrespected, he chose his words carefully.

"No," he said. "I think it's just by being overlooked, or not put in the conversation. There are some players here who have done some pretty special stuff. ... I like the moves that we've made. But we're not out here trying to win public approval from the baseball-watching world. We're out there to try to please our fans and play the game the right way. We're not out there trying to solicit support. We just have to play."

If this were some other sport, or this were some much-ballyhooed Year of the Cubs Hollywood screenplay, the next scene you'd see would be Matheny stomping into his locker room, ripping up a paper with the Vegas odds on it and roaring: "Now let's go out there and show 'em."

But this just in: It's baseball. It's not a scene from "Hoosiers." So Matheny said he has made zero attempt to pour all this Cubs talk down his team's fuel tank -- because "I haven't had to."

"I've been asked that a lot," he said, "whether I've had to come in and say, 'Hey, here's what they're saying,' or, 'Here's what shirt they're wearing,' or whatever it is they've got going on. We haven't needed that. If I sensed that was something this club needed, then I'd probably address it. But it would be more saying, like, 'Look, this is going on. We can't deny it. Let's get back to the task at hand, which is to control what we can control.'"

So I actually get the feeling that, in their own unique way, the Cardinals are actually enjoying all this Year of the Cubs chatter. But that's because they've already learned a lesson the Cubs are about grapple with for the next six months.

"You know," Brandon Moss said, "you can't win the World Series in the offseason. You win it on the field."