After staff ace Yu Darvish left his first Cactus League start with tightness in his triceps muscle, the news broke that he had sprained his right ulnar collateral ligament and would almost certainly miss the 2015 season because of Tommy John surgery. It was up to Banister, a mere three weeks into camp, to calm the anxiety and tell the Texas players it was permissible to feel a sense of sadness and personal loss.

"You felt for a guy like Banny," Rangers catcher Chris Gimenez said. "It was his first year as a big league manager, and his stud ace goes down on the first day of games. He told us, 'We've lost Darvish for the year. He's going to have Tommy John surgery, but he's going to come back and be even stronger than he was before.' He tried to make light of the situation, but you could just feel the air go out of the room."

Life keeps happening while baseball teams are busy making other plans, and the Rangers are dealing with an even more daunting setback this spring, with the news that third-base coach Tony Beasley has Stage II rectal cancer and will begin chemotherapy treatments shortly. The organization has rallied around Beasley, who draws strength from scripture and provides a lesson in grace under pressure.

In the Texas clubhouse, there's a profound sense of calm and a belief that good things are in store. The Rangers overcame an 8-16 start and a nine-game deficit in late July to win the American League West the past season. Prince Fielder and Adrian Beltre are ready to lead the offense, the bullpen is quietly dominant, and Darvish is back in the house, fully engaged and ready to deal once the medical staff clears him for takeoff.

The timetable is in place. Barring a setback, Darvish will begin a minor league rehab assignment in late April and join the big league rotation by mid- to late-May. Conventional wisdom says he won't regain optimal arm strength and return to prime form until 2017, but Rangers general manager Jon Daniels takes a more sanguine view of the proceedings. He's convinced that great pitchers -- because of their commitment to excellence or the margin of error provided by their exceptional talent -- render standard projections meaningless.

"I know a lot of people say, 'It takes a year to come back from Tommy John,' but I call B.S. on that," Daniels said. "At some level, you've got to be smart and observe and take it step by step, of course. But look at how the top guys like [Matt] Harvey and [Jose] Fernandez have come back from this. I wouldn't bet against this guy."

To Texas players and coaches, the resolve in their ace's eyes suggests he is ready to attain his previous heights of Darvish-ness.

"We saw it when Prince got hurt, and a little bit with Yu," Daniels said. "These guys have been doing it since junior high school. To have the game taken away from you, with the perspective that brings, it kind of rekindles the love of the game. It sounds corny, but it's real. Yu has always been a hard worker, so that's never been a question. But now he's on a mission."

The prospect of a healthy, productive Darvish is particularly exciting because coincides with several other developments in the Texas rotation since March 17, 2015, when Dr. James Andrews replaced Darvish's torn UCL with a tendon from his forearm.

"We saw it when Prince [Fielder] got hurt, and a little bit with Yu. These guys have been doing it since junior high school. To have the game taken away from you, with the perspective that brings, it kind of rekindles the love of the game. It sounds corny, but it's real. Yu has always been a hard worker, so that's never been a question. But now he's on a mission." 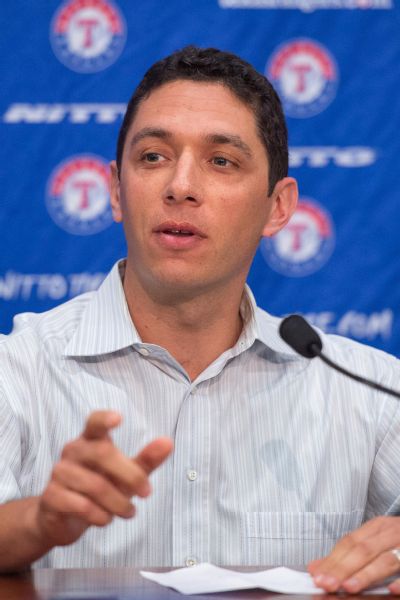 At the July trade deadline, the Rangers acquired three-time All-Star Cole Hamels from Philadelphia. Although the Rangers paid a heavy price in prospects, Hamels' 7-1 record and 3.66 ERA down the stretch showed he could handle the literal and figurative heat in Texas.

Derek Holland is back after being limited to 95 2/3 innings the past two seasons because of knee and shoulder injuries, and Martin Perez should be stronger now that he's 21 months removed from Tommy John surgery. Colby Lewis, who receives little attention outside the Rangers' clubhouse, led the team with 204 2/3 innings and 17 wins the past season. Also, the Rangers have plenty of options from the Nick Martinez-Chi Chi Gonzalez-Nick Tepesch-A.J. Griffin-Jeremy Guthrie portion of the menu to fill the void until Darvish's return.

Hamels pitched in the same rotation as Roy Halladay, Cliff Lee and Roy Oswalt in Philadelphia in 2011, so he knows what it's like to be part of an elite starting five. At the very least, Texas' 2016 group compares favorably with the C.J. Wilson-Lewis-Holland-Matt Harrison-Alexi Ogando quintet that led the team to its most recent World Series appearance in 2011 and the Cliff Lee-led aggregate of the previous year.

"A lot of guys here haven't been healthy, so it won't be looked at like what we had in Philly, with all those guys who threw 200 innings every year and were Cy Young Award winners," Hamels said. "But this is a group with all the potential in the world to do it. I think we're going to surprise a lot of people and show everybody what we're all about."

At his best, Darvish belongs with Clayton Kershaw, Chris Sale and a select few others on the short list of pitchers who can put up cartoon numbers while making hitters look foolish. Darvish's strikeout rate of 11.22 per nine innings from 2012 to 2014 was easily the highest among MLB starters. In 2013, when Darvish led the majors with 277 strikeouts, he ranked first among MLB starters with a swinging strike rate of 12.9 percent.

Darvish is both ultra-competitive and resourceful, with more pitches than Pablo Sandoval has favorite desserts.

"He has 11," said Gimenez, who counts three different fastballs to each sides of the plate, along with a hard curveball, slow curveball, cutter, slider, changeup and split. "Or maybe it's 12."

Darvish is ambidextrous to the degree that if you watched him throw left-handed in a casual game of catch, you would swear he is a southpaw. His thirst for knowledge is also readily apparent to Banister, who watches him seek others out in his quest for self-improvement.

"This cat studies absolutely everything," Banister said. "He can emulate his own teammates' deliveries, and he studies hitters and other pitchers. I see him interact with his other teammates in asking questions, and you can tell he's interested. He doesn't just want to be a big leaguer -- he wants to be one of the best."

Letting his guard down

When Darvish arrived in the U.S. from Japan in 2012, he had a reputation of being guarded, which was understandable. He had been a megastar since his teen years, and his every word and off-the-field activity were monitored by a pack of traveling Japanese reporters. Standoffishness was part of a recipe for survival.

Last spring, before his injury, Darvish showed a different side when he did his first extended interview in English and elicited double-takes from the Texas media with a barnyard epithet.

"I've been around a few Japanese guys, and he's up there as one of the nice, really funny guys," Hamels said. "I'm surprised how much English he knows. He gets the jokes, and you can banter back and forth with him a little bit. He's strong, so he can put me in a corner anytime he wants. I've got to know my limitations."

Darvish's wry side was evident in a recent exchange with Daniels, who asked him about his goal for returning to the Texas rotation.

"If we lose your paycheck along the way, just let me know," Daniels replied.

Beyond Darvish's sense of humor, the Rangers were impressed with his show of support when his teammates rallied to win a division title the past fall. Darvish was legitimately engaged when he could have easily focused on his rehab or drifted in and out of the clubhouse like a ghost.

Darvish seems more relaxed and willing to invite others into his world each year. When his girlfriend, former professional wrestler Seiko Yamamoto, gave birth to a son in late July, Darvish shared the blessed event on Twitter. When his younger brother was arrested for gambling activities in Japan, Darvish openly addressed his lack of involvement. He has since been cleared of any wrongdoing by Major League Baseball.

Although Darvish is extremely businesslike come game day, he is no longer too immersed in his cocoon to show his human side.

"I think having a year off and being away from everybody kind of hurt him a little bit," Gimenez said. "It made him realize what he's missing. You can see that in him now. He's a lot more exuberant in the clubhouse. You can generally tell he's excited to be back out there. And that's a good thing, because when the ball is coming out of his hand like it is now, it's a bad thing for a lot of teams."

The Rangers threw a wrinkle into Darvish's comeback protocol when they shut him down from throwing for six weeks in the offseason. Darvish went home to Japan in November and maintained his exercise routine and daily workout regimen, but he had explicit instructions to refrain from picking up a baseball until he returned to Texas in January.

During a discussion with Texas beat writers two weeks ago, Darvish showed his cocky side when he said, "I could throw 95 right now." But the Rangers are taking pains to balance the short-term impact of his return with the long-term outlook. Banister helped nurture Perez back from Tommy John surgery last year, and the manager thinks Perez and Darvish both have long careers that will extend far beyond their contributions to the 2016 Rangers.

Doug Brocail, who replaced Mike Maddux as Texas' pitching coach this season, has promised he won't make any decisions on Darvish until the training staff gives the go-ahead. Brocail underwent two elbow reconstructions in his 15 big league seasons, and that gives him credibility with Darvish and some insights into the road that lies ahead.

Pitcher and coach enjoyed a bonding moment recently, when Brocail rolled up his sleeve to reveal a lengthy scar on the inside of his right elbow. As Brocail recalls, Darvish quickly snapped to attention.

"I scarred very well, and that's something Yu has to understand," Brocail said. "You're going to snap that scar tissue, and you're going to walk off the mound thinking it's bad. Then all of a sudden you're gonna say, 'That's pretty good.' He needs to get some violence back in his delivery because what we do is violent by nature."

Yu Darvish lost baseball through an unfortunate, violent twist of fate last year, and now he is approaching the game with the joy of a man who has rediscovered an old friend. Pardon him for his impatience, but he's counting the days until he hits the recovery finish line.