It only gets better from here, folks. The nervous, will-it-fly experimental phase is over. The World Baseball Classic works.

If last week's lede was injuries and apathy, this week we revel in what's gone right.

This week we talk about ...

Team USA falling to Canada. The very prospect of Chipper, Roger, and Company going home early, in all its lightning-strike, small-sample-size capriciousness, made March baseball feel like October baseball. Long-live Adam Stern. Long-live the music of chance. Long-live fate and the prevailing wisdom getting twisted like so many soggy concession-stand pretzels. 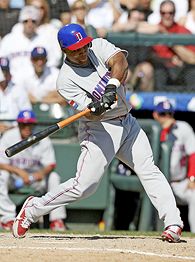 The long ball. Big Papi has gone deep, like we knew he would. And Adrian Beltre is going off, like we thought we might never see him do again.

Playing for pride and the championship. Ichiro made like a Kurosawa warrior and told the Tokyo press Japan wanted not just to win, but to "win in a way to make our opponents feel that they won't be able to beat Japan for the next 30 years." Not since Hannibal Lecter confessed to gorging on a census taker's liver with fava beans and a nice chianti has the will-to-power been so perfectly naked and amusing. Consider the "are the players really motivated?" questions answered once and for all, and do not miss Sunday's Japan-USA matchup.

Passion. A packed house at Hiram Bithorn Stadium went cuckoo for Cocoa Puffs as their Puerto Rican squad slapped Cuba around like Napoleon Dynamite's tetherball, mercy ruling them 12-2 in seven. Cuba came into the game winners of 19 straight international games and Puerto Rico, whose winter leagues had been tailspinning these last several years, came into the tournament desperately looking to restore their international baseball reputation. Cue the Mamas and the Papas.

Making history. A no-name hurled a no-no, for pretty much a no-home-walking-the-dog club. The smart money was on one of the bigs from the bigs doing such a thing to a team like the Netherlands, but instead young Dutch pitcher Shairon Martis flipped the script and hypnotized Panama for seven innings. Beauty. After Steinbrenner hating the thing, consider this the single-most convincing evidence the baseball gods are on the side of the WBC.

New talent. Cuban third baseman Yulieski Gourriel looks, at age 21, with 5 RBI and 9 total bases in his first 11 WBC at-bats, like a guy you should draft for your keeper league, just on the chance that he whispers asilo, por favor to some customs agent or hotel concierge soon. The kid is ready. Now.

7 RBI for The Kid. Just so nice Ken Griffey Jr. isn't hurting right now. Anyway, I know it was against South Africa, and I know pitchers are behind hitters in terms of timing and stuff and such, but you can't tell me it wasn't sweet to see Griffey Jr., the gangly poster boy for juicelessness these many years, posting a 4-for-4, 2 HR, 7 RBI line the same week we were all reading about the zits on Barry's back.

The Korean boom. Korea edged Japan, 3-2, in the final Pool A game. Korea's pitching has looked terrific so far, giving up just three earned runs in three games. (And Chan Ho Park's getting saves. Who knew?) The win over Japan not only suggests Ichiro and his boys have to dial it up a ways before the "30-years" goal is met (and Lord knows I want to see Ichiro dialed up from his already nearly Tysonesque early-round stance), but it also means the second-round rematch between the two, in addition to good old fashioned nationalistic animosity, will be super-charged by one club's desire to prove the first time wasn't a fluke, and the other club's desire to, well, squash the first club like a bug.

Nobody getting hurt. So far, although there has been a fairly typical variety of spring training injuries in the "real" spring training, not a single player has been injured through the first round of the Classic. There were, however, a few moments during the Cuba-Puerto Rico game when it appeared Pudge Rodriguez might hurt Luis Borroto real bad after the Cuban pitcher went headhunting following a Bernie Williams home run for PR.

R-E-S-P-E-C-T. Vinny Castilla is wearing the captain's C for Mexico. Can't explain it, but the big hockey-style white C against the almost-too-green green of Vinny's Mexico uni is my favorite tournament example of mutual love and respect between player, fan, and country. Castilla's not the offensive force he once was in the majors, and he may struggle mightily at PETCO this coming season, but here in these two weeks, he's The Man. He's gotta dig that, don't you think?

The hugging and backslapping and jumping. Chipper Jones and Derrek Lee were greeted like Odysseus home from the wars after their home runs against Mexico. The Dominican Republic vs. Venezuela game was a scene out of Chapelle's "Block Party." Groovy, infectious stuff. I swear, I'm thinking it might be time to dust off "Baseball Fever ... Catch It!"

And on and on it goes. It's true the Classic hasn't been a "classic," yet (we'd need a handful of tight, blow-for-blow games coming down the stretch for that), but it's been mightily entertaining, and if the first round tells us anything, it's stay tuned for the second.

Eric Neel is a columnist for Page 2.